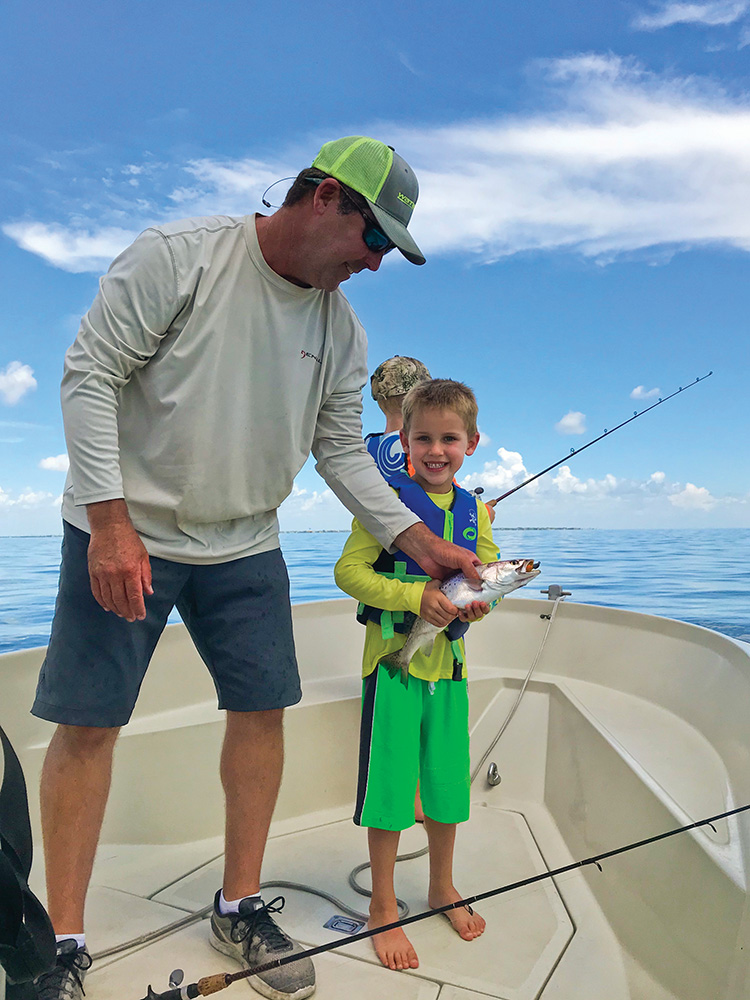 It’s our responsibility to make every effort to ensure that young anglers like 5-year-old Clay Dolch get to experience what we did at his age.

As summer draws to a close I look back and try to process all of the ups and downs that took place over the past several months.I always tend to make comparisons to years past.Was this summer better or worse?What made this summer different from others?What do we have to look forward to?There are many observations to help me attempt to answer such questions.

In my opinion, this summer was not as consistent compared to most years.There were fewer trout and the overall numbers of 5 to 7 plus pound fish appeared to be down.Patterns also seemed to run about a month behind schedule.I truly believe this was greatly influenced by the floods from Hurricane Harvey late last summer.The majority of our bay system experienced salinity declines to nearly zero parts per thousand during the floods.Spotted seatrout require at least 4 ppt salinity to survive.I believe many of the trout in the Galveston Bay Complex exited through the passes instinctively searching for higher salinities.I understand that there have been studies conducted that have indicated that speckled trout are restricted mostly to their home estuary over the course of their lives (Biology of the Spotted Seatrout, Stephen A. Bortone, Ph.D.).All things remaining equal I’m quite sure this is true.However, exceptions are made under extreme circumstances such as severe freshwater inundation.

It is my opinion that the trout that were pushed out of the bays took quite some time to return.Furthermore, I believe that not all of them actually did return.I can’t say exactly where they reached their final destination. Nor can I say how many became prey when they found themselves at the bottom of the food chain in the Gulf as opposed to their usual apex predator status in the bay.Not that we had a ton of trout before the floods, but we darn sure had less after everything returned to “normal.”

The pattern lag time can also be attributed to the massive (and continuous) menhaden hatch we’ve experienced.As frustrated as Harvey made us with regards to trout fishing, the massive amounts of freshwater actually rejuvenated our estuaries from a forage standpoint.We’ve also experienced additional timely rainfall since then and that has further contributed to the boost in the shad population.As I’ve mentioned before, trout can become difficult to catch when they’re feeding on tiny shad.As shad and other forage species grow to a larger size the catching becomes much easier.I witnessed more shad bay wide this summer than I ever have in my life.Hatch after hatch prolonged a transitional-like behavior as small shad were available for longer than usual periods.

We also witnessed exceptional shrimp crops.Again, I think this can be largely attributed to fresh water.Normally, when the bays are full of shrimp we will find gulls and terns hovering over frenzied schools of trout.This was not necessarily the case this summer.Oh, there were birds working.But only 9 to 14 inch specks, lady fish, sand trout and gafftop could be found under them for the most part.To me, this was one of the tell-tale signs that the number of legal sized trout were down from years past.I don’t care what was reported by local newspaper writers or anyone else.I’m telling you what myself and every single person I’ve spoken with that fished Galveston Bay this summer has witnessed.

There were definitely fewer areas holding trout than in years past.Many traditional reefs struggled to produce as in years past.During the later portion of summer we found schools away from reefs and structure.They were following shad out over mud in 8 to 10 feet of water.I’ve always talked about how trout prefer deeper water with cool mud bottoms during the heat of the summer.One would think that you should fish near the bottom in these scenarios but the majority of our fish were actually suspended just beneath the surface.Floating twitchbaits and soft plastics rigged on 1/16 ounce jig heads produced the best bites most of the time.I think this somewhat odd behavior can be attributed to the billions of shad buzzing near the surface.

This abundant food source also resulted in very healthy fish.Some of our trout resembled springtime fish in their appearance, even in late summer.In addition to the increased girth caused by high lipid content diets, roe sacks stayed nearly full all summer.Trout will continue to have numerous spawns all summer and into fall when there is an uncommon abundance of food.It reminds me of the deer on our ranch.In lean drought years, does will birth one fawn.In wet and healthy years, when there’s an abundance of high protein forage, does will drop twins and sometimes even triplets.This is good news for our fishery.

However, moving forward I foresee somewhat of a tug of war between a trout fishery trying it’s best to recover and an ever-increasing number of anglers (recreational anglers and fishing guides).Additionally, there is less habitat in the form of oyster and clam reefs, better technology and more networking than ever.Trout will gravitate to areas with suitable habitat.Those areas have basically been reduced by half in the last ten years or so.Therefore, most of the trout will concentrate in half of the areas.When they do groups of boats will find them and within a matter of weeks large numbers of trout will be removed from those schools.It seems like there’s just not enough to go around sometimes.

I can sit here and talk about how much more fishing pressure we have now compared to ten, twenty or thirty years ago.I can preach about habitat loss, more fishermen and better technology.The problem is this is what we’ve been saying for a while.It’s time for changes to be made.Here are a few places to start –

Our standards have been lowered.A big trout for Galveston Bay is now five pounds.“Solid” keepers are 17 inchers.A “good” day is catching 15 keepers.Over time, we’ve continuously lowered the bar and then brainwashed ourselves into thinking that everything is fine and that next year will be better.We keep telling each other that we just have to hang in there.Well, we’ve been hanging in there for a while.