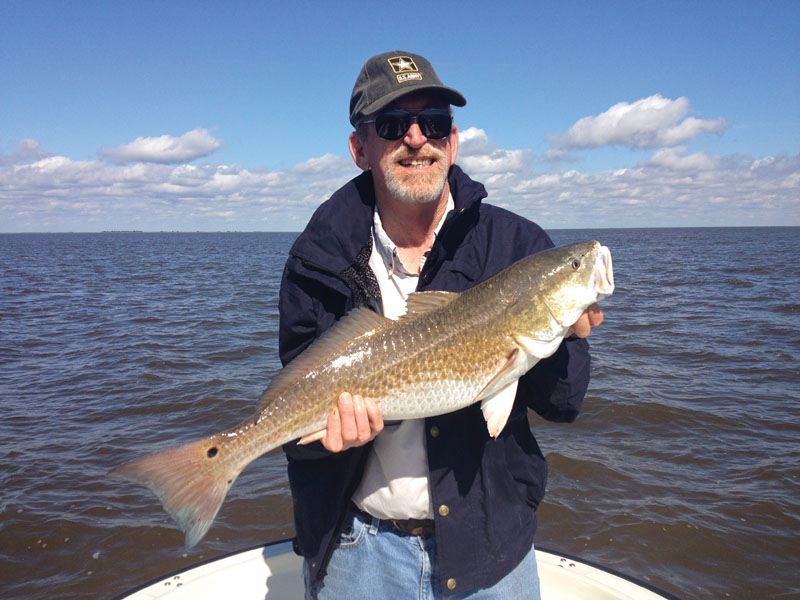 Steve Tuttle pulled this over-sized red from a flock of birds covering a huge school of under-sized trout.

Sometimes deciding on a topic proves to be a challenge for me. I pondered several topics for this issue then recalled questions some of my clients and folks around the cleaning tables have been asking recently.

How do you think all this freshwater is going to affect fishing? Do you think we have as many trout as in years past? Have you been catching many big trout? We can't seem to find the big trout; where are they? What is your outlook for 2016? These kinds of questions crop up almost weekly.

In an effort to provide answers I will rely upon my own observations and discussions with other fishermen as well as two very respected Texas Parks and Wildlife Department biologists in Lance Robinson (Coastal Fisheries - Deputy Division Director) and Dr. Mark Fisher (Science Director Rockport Marine Lab).

Mother Nature and human activity are the two things that impact our fishery with Mother Nature being the most dominant. Historical weather events trigger changes. Some changes are positive while others have a negative impact. Some short-term negative occurrences yield long-term benefits while some events which seem positive at the time are actually negative down the road. We, as fishermen, influence which direction the pendulum swings. We have to educate ourselves about the environmental and biological impacts from floods, hurricanes, red tides, etc. and react accordingly.

"Coastwide, the 2015 spring gill net surveys indicate the 8th highest catches of spotted seatrout in 40 years of sampling. Galveston yielded the 2nd highest in their history. Corpus had their 3rd highest, while the upper Laguna Madre set a new record high in 2015. Other bays were average to above average" - Dr. Mark Fisher.

Near record rainfall concentrated trout into smaller areas up and down the Texas coast in late-spring and early summer especially in the Galveston Bay System. As a result, thousands of trout (with quite a few 24-plus inchers) were harvested with ease for a four or five month period. By late July, salinities increased throughout bay systems resulting in a more even distribution of fish. We experienced decent catch rates, but not as many large trout as the summer progressed. More undersized trout were caught than anyone could ever remember. It was not unusual to catch sixty to eighty 12- to 14 inch trout some days. Trout became somewhat concentrated again due to excessive rain and rivers at flood stage in October. Once again, numbers of legal trout were caught in condensed areas, but unlike during the spring floods, five-plus pounders were few and far between.

It's my opinion that when trout are heavily concentrated in a few areas numbers tend to become skewed and create the perception that there are millions of keeper fish. Likewise, creel surveys may show strong numbers because 70% of the anglers are fishing the same areas where trout are stacked. Personal observations tell me that this was the case in the Galveston Bay Complex for at least 8 of the last 12 months.

One of the most prolific shad hatches was experienced during the year because of lower salinities and new nutrient loading (sediments, zooplankton and phytoplankton) from increased river flows. "Nutrient flow settling into the bay is like putting fertilizer on your yard. Shad were so thick at one point that cargo ships in the Houston Ship Channel were overheating from shad clogging their cooling water intakes." Lance Robinson. Brown and white shrimp flourished as well.

As I've mentioned in several past articles, live oyster reefs are the lifeblood of many bay systems especially on the Upper Texas Coast. Oysters thrive in salinities ranging from 10- to 25 ppt (parts per thousand). They are unable to survive in less than 2 ppt. The majority of live reefs in the Galveston Bay Complex experienced very high mortality because of low salinities in 2015.

Barring any catastrophic weather events, 2016 looks to provide fishermen with some upside, especially for those anglers who prefer more fish over larger ones. Here's why:

"Bag seine surveys are still on-going and indicate very strong recruitment of juvenile spotted seatrout during 2015. June through November are the peak months for juvenile trout in that survey." Dr. Mark Fisher. My discussions with Dr. Fisher and Lance Robinson further confirm what we as fishermen have witnessed on a daily basis; lots of little trout, coastwide.

Most of the barely-undersized speckled trout that were caught in 2015 will be keepers in 2016. A 14 inch trout caught in November of 2015 will be 15 - 16 inches by April or May of 2016. I believe there will be an abundant population of trout in the 2- to 3 year-old age-class (15 to 18 inches) and similar populations of 13- to 14 inchers based upon what we observed in 2015 with the 10 -12 inch trout. Because of the excessive numbers of 23 plus inch trout taken during the low salinity periods of 2015 I think we will see fewer above average size trout caught in 2016. Sure, there will be some big ones caught, but most likely fewer than there were in the last few years. There were excessive numbers of trout in the 4- to 7 year age-class removed from the fishery in 2015. In other words, it should be a great year for numbers but maybe not so much for size. I hope my theory proves incorrect, but I'll be surprised if it does.

Texas Parks and Wildlife Department (TPWD) Coastal Fisheries Division conducts independent sampling to determine relative abundance and size of finfish and shellfish in Texas coastal waters to assist in managing and allocating harvest of marine resources in state waters. Such monitoring has been ongoing since 1984. I can personally attest to their diligence and accuracy, having spent the better part of my young life in the oyster industry and now spending most of my days on the water chasing trout. I have always stayed in close communication while soaking in every bit of knowledge they've had to offer over the last 30 years. While freshwater killed the majority of oyster beds during 2015 it also reduced high-saline thriving oyster-killing organisms such as Dermo (Perkinsus marinus), oyster drills (Stramonita haemastoma) and sponges. I mentioned earlier that short-term negative occurrences can produce long-term positive results. This is a prime example. Because such parasites have been killed by fresh water, more substrate becomes available for juvenile oysters to attach. The TPWD have been performing ongoing sampling and have documented significant recruitment of spat set (baby oysters) coastwide. This is not a big surprise as history has proven that significant oyster growth occurs within 2 years following flood events.

New Weapons for the New Year

I have grown fond of a few weapons that have further increased catch rates for me and my clients. 13 Fishing's Concept series reels have enabled us to reach out and touch the trout, thanks to their innovative technology with every reel having ceramic bearings straight from the factory. Also, cold fingers are less likely to slip off of their cork handle grips on those blustery days. MirrOlure Provokers have saved many days when catching would've otherwise been marginal thanks to their scent impregnation and enticing action, not to mention the fact that you can catch dozens of fish on them before having to stop and re-worm. As always, Waterloo Rods are the very best choice for offering a rod to suit any application. It's difficult to combine sensitivity, strength and feather-weight all into one, but they've mastered it.

The odds of sticking that CPR personal best trout could possibly be reduced, but the New Year should provide us with lots of bites from keeper-sized fish. Increased habitat and abundant forage species should provide optimum conditions to keep trout populations thriving. Continued funding from various sources will enable TPWD to further enhance oyster restoration through the planting of river rock during 2016. 180 acres of substrate in the form of two to three inch river rock was planted last year. An additional 80- to 100 acres (maybe more) is slated for 2016.

There are always going to be unknown and certainly uncontrollable developments. Regardless, we have to make every effort to have a positive influence. Practicing more catch and release of large trout would be a great place to start. Overall, the future looks bright.