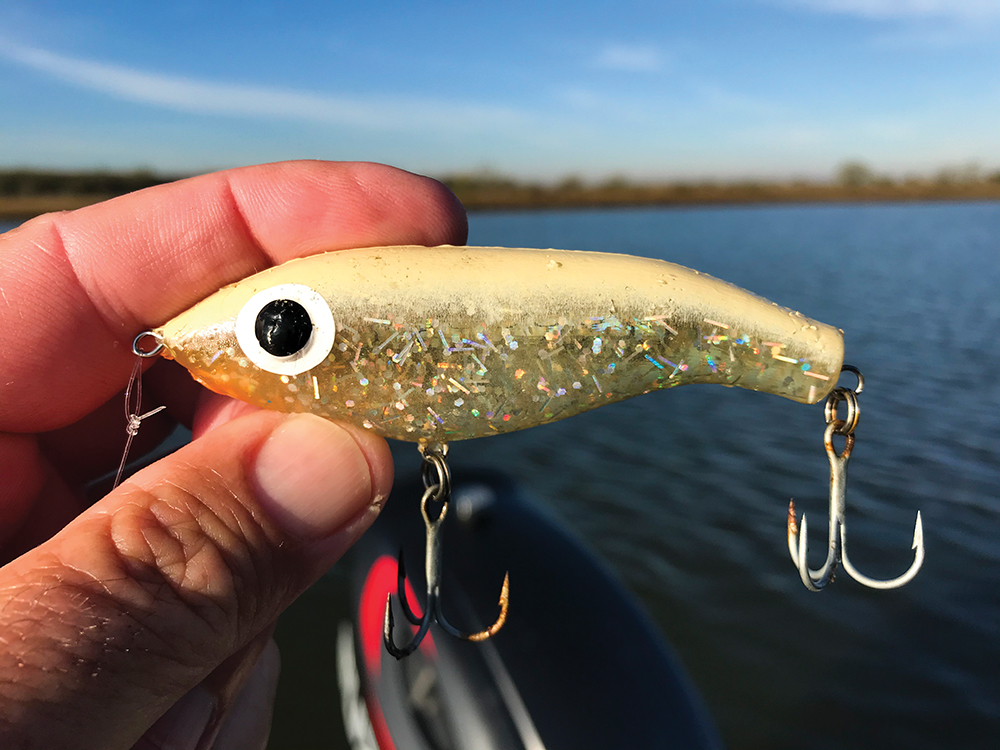 One of the things I love about the Fat Boy is having the ability to bend the tail up or down for shallow or deep water.

Many things are racing through my mind as I sit here in my boat tied up to the pier. The air temperature is 42°F following the passage of a strong cold front. Unlike yesterday, I can see every star in the sky and the tide has dropped almost two feet on the strong northwest wind. The atmospheric pressure was 1016 millibars yesterday and it’s now 1029 millibars. Surface water temperatures plummeted from 63° to 55° overnight and will undoubtedly continue to fall over the course of the day. How will the trout that have been so cooperative for us in recent days react to the sudden changes?

My new clients will arrive soon and I wonder what their skill levels will be. My guess is that our bites will be much more subtle than the day before. Will they be able to feel the soft, spongy bite of a lethargic post-front trout? Following handshakes and small talk, I will set out to hopefully ease their minds that they have chosen the right guide.

The wind is still brisk from the north. The flat I’ve been fishing is simply out of the question, not only because of the wrong wind direction but also because of the tide falling out. In addition, the pressure increase and water temperature decline will more than likely force them to move.

Where is the nearest deep water with suitable structure and food? There is a deep bayou nearby that leads from a back lake to the bay with scattered oyster shell on one side. I caught a few fish in there after the last cold front but this front was much stronger. I’m hoping they might be stacked even thicker.

We started our drift in about three feet of water on the leeward side of the bayou. The wind would push us diagonally across the middle of the bayou, which was approximately eight feet deep, then gradually shallowing up to three feet again on the windward side where the bottom consists of black mud with clusters of oysters.

We were all throwing various soft plastics rigged on 1/8 and 1/4 ounce jigheads. Every time my boat was positioned to where we were able to cast across the drop-off on the windward edge we would get bites but only a few hook-ups. Other than the fact that most of our trout were undersized, two things became obvious to me after the first couple of drifts. The guys using 1/8 ounce jigs had a higher hook-up ratio then the one guy throwing a 1/4, and twice as many bites were coming on limetreuse versus Chicken-On-A-Chain.

The reasons were simple when you consider the circumstances. Soft plastics rigged on lighter jigheads stay in the strike zone longer than ones rigged with more weight, creating a more natural bait-like appearance to the trout that were suspended at a depth of about six feet, (more than likely a thermocline layer). In addition, because they were in a somewhat lethargic state and negative feeding pattern due to the sudden drop in water temperature, you were more likely to get bit by giving them a longer look at the lure. With regards to lure color, the bright limetreuse Saltwater Assassins and MirrOlure Lil’ Johns likely offered a better contrast than the darker baits due to the clarity of the water and clear, bright sky.

So now that we’ve figured out where the fish are, what they are willing to eat, and how to make a successful presentation, the next step is to decide if these small trout are worth staying around for. Were there larger fish also present and simply not feeding yet? As I mentioned, the majority of the trout we were catching were just undersized but the few keepers we were catching were in the 18 to 20 inch range. My clients were doing a great job of detecting the soft bites so none of the throwbacks were hooked deep and were swimming away plenty healthy.

There are a few things to consider when contemplating leaving an area. We’ve all heard the old saying, “Never leave fish to find fish.”  While this is mostly true there are some exceptions. Had my new clients been letting the small specks swallow their jigs resulting in us unnecessarily killing them we would have relocated for sure. But this was not the case. In addition, the wind and super low tide had us very limited with regards to the areas we could target, and there were two other crucial factors we hadn’t yet had time to observe. The 13% waning moon was still about two hours above the horizon (on its way down), so we had yet to see the effects of the minor feed. The other factor, which is a huge here on Galveston Bay, is that the tide was due to start coming in around 9:30AM and it was going to be a big swing going from a -0.5 to 1.0 feet. Tide changes in this bay system (and most others) can often trigger the best bite of the entire day.

So the decision has been made to stay put for now to see what develops. We continued making drift after drift until the track lines on my GPS eventually turned a small section of the screen into a blob of jagged lines. We were able to catch a few more keepers but the action slowed with each pass across the bayou. Even the tiny trout stopped eating as the moon disappeared below the horizon. And, as we approached the tail end of the minor feeding period, the tidal current had gone completely slack. The only thing we could do at this point was to wait and pray the fish would trigger again when the incoming tide began to arrive.

Remember that I mentioned that we were drifting across the deep portion of the bayou from one shallow edge to the other?  Well, there is another area in this large bayou that I failed to mention. There’s a sizable mud flat adjacent to the deeper portion of the bayou, closer to the open bay, that forms a cove of sorts. Water depth across this area of mud flat ranges from two to four feet and the bottom is mostly very soft mud with scattered shell. As we were drifting I kept noticing over my left shoulder an occasional mullet flipping there. We eventually relocated and what happened next was well worth the wait.

It seems our move couldn’t have been timed any better. The tide had just started to come in across the flat and up into the bayou. Mullet were becoming more active by the minute. In a span of roughly an hour we caught between 30 and 40 trout up to five pounds on various soft plastics, MirrOlure Fat Boys, and Borbolleta Hot Rods.

Not only did the tide and moon play a role in our success, the stiff wind clouded and streaked the water on the flat which caused it to warm under the bright late-morning sun. I also believe (and always have) that trout are much easier to trick in slightly off-colored water versus air-clear. It also didn’t hurt that the atmospheric pressure was already declining from when our morning first began. By having a solid plan and adjusting to the elements as they changed over the course of the morning we were able to have a successful day on the water.

Keep your head on a swivel, make adjustments, and good luck on the water!