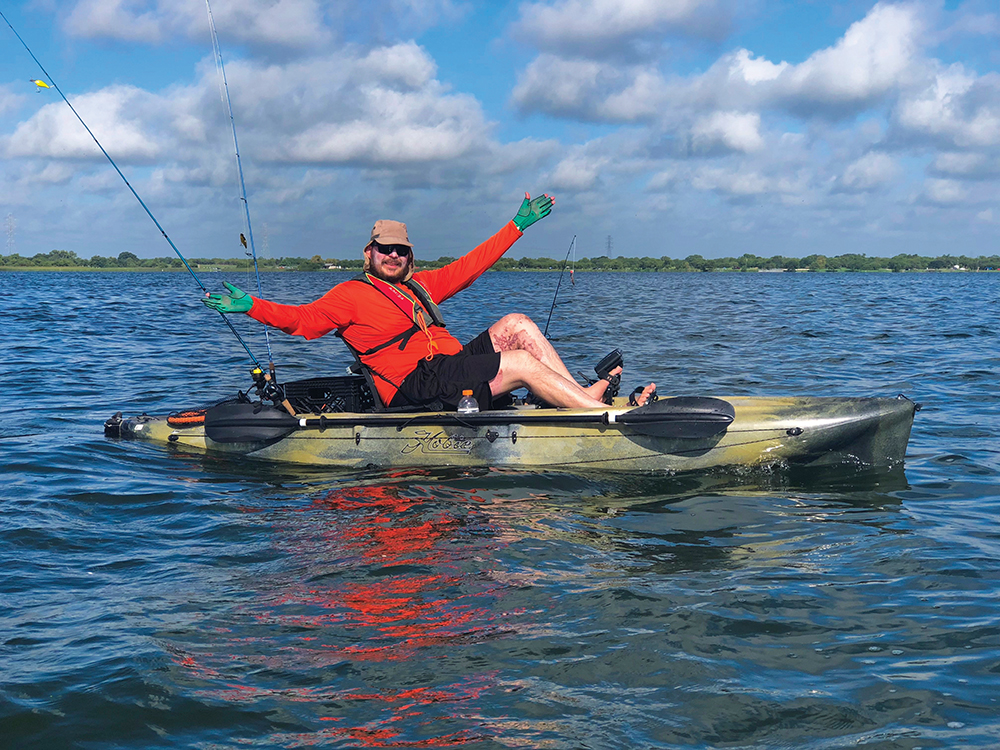 Editor’s Note: Capt. Steve Hillman has been unable to write for us this month as his mother suffered a severe injury and has been hospitalized nearly two weeks in ICU. Steve has been maintaining a bedside vigil and reports that she has begun responding favorably to treatment. Please join us in prayer for a swift and full recovery. We have a very inspiring story in Capt. Steve’s stead, written by Michael Escamilla. Michael is a burn survivor and his tale is a wonderful testament to his passion for the fishing lifestyle and how yearning to get back on the water helped him accomplish a miraculous recovery.

Growing up, I would have never dreamed that fishing would someday save my life. Let me give you a little backstory.

In my youth, fishing was more of a once a month hobby that my father and I would do together, never a major priority or something that was emphasized above other activities. As I grew older it became something that I would do more frequently to escape the hustle and bustle of the 9-to-5 work schedule that most of us fall into. I soon grew tired of fishing from the bank as many people often start off doing, and yearned to be out there on the water.

I started looking into kayaks. I purchased a used Ocean Kayak Prowler 13. It was a great starter kayak, affordable and very fast, but before long I wanted something more stable. A kayak that would allow me to stand and sight-cast, which led me to check out the Vibe line of paddle boats. The Vibe Sea Ghost was well within my price range and reviews from owners were very positive. I purchased one in orange camo and began to enjoy my adventures on the water more than ever.

Then I caught the offshore bug. Seeing guys bringing in giant kingfish and red snapper from oil rigs offshore had a grip on me and I had to get in on that type of action. So, with heavy persuasion from a close friend, I went all in and bought a Hobie Outback 17. And, well, the rest is history.

The Hobie opened a whole new world to me. Possibilities became nearly endless with the ability to go farther with less effort. But before I had the chance to venture offshore, I had a get together at the house with some close friends to break up the everyday hustle and hassle of the work week.

Everything was going great, friends were laughing and having a great time, sharing stories and cracking jokes. Against my better judgement I decided to light a brush pile that I had been saving for such an occasion. Bonfires are always fun.

The wind was blowing stronger than I anticipated, but with the help of friends, we kept it contained and continued enjoying the evening. The night turned into early morning and friends started to tire and one by one started to leave, only a handful stayed behind. The fire was dying to only a few embers. Doing something I’ve done more than few times, I grabbed a gasoline can and walked over to the fire. I leaned over a branch that had a small red glowing section, pulled back the nozzle and poured fuel directly over it. That’s when my world came to screeching halt.

I remember a loud poof, kind of like standing in front of a large concert speaker when the drummer hits his bass drum really hard during a solo. A blinding light overwhelmed me while the feeling of a warm hug engulfed me. I realized I was on fire.

So, as they teach you in grade school to stop, drop, and roll; I did that. But that doesn’t work when you’re drenched in gasoline.

My saving grace was the few friends that had stayed behind. Without hesitation they raced to put out the flames. Who knows how long I would’ve been rolling around if they weren’t there to smother the flames. Lying there staring up at the stars, my friends continued to ask if I was OK. I knew I was in bad shape. Luckily though, my body went into shock and I wasn’t feeling the pain I knew I should have been feeling.

With the majority of my skin being burned away, the rush of cold air began to sting as if I was butt-naked in the middle of Alaska. The paramedics arrived and that’s the last thing I remember from that night. I woke up two weeks later in ICU at Brooke Army Medical Center here in San Antonio. With burns over 43% of my body, I spent 52 days in the hospital with the majority of it in the ICU; fighting infection, three blood clots in my lungs, and 30 days with a feeding tube down my nose pumping nutrients into my stomach since I couldn’t eat real food due to the two tracheotomies that I had.

Most days were filled with rehab nurses coming in, stretching my muscles and trying to keep my body flexible since I didn’t have the strength or motivation to do it myself. Nights were spent fighting nightmares induced by the pain medications that were prescribed to help lessen the constant needle-like feeling I would get if any part of my body touched anything other than a pillow or blanket.

I had constant support from family and friends. I look back, realizing now how many people actually cared about me. Family and friends would come in and pray for me as I laid there wondering, WHY ME? One of these friends happened to be David Ortega, who was also an accident victim. David turned his life around and started a fishing guide service called Second Chance Fishing here in San Antonio, so I knew there could be a means to an end.

By the end of my hospital stay I had grown very weak, so weak that I had to learn how to stand up and relearn how to walk, relearn how to feed myself and do simple things like brushing my teeth. Everyday tasks that most take for granted became real-life struggles. After what seemed an eternity I was finally released to go home and that’s when the real challenges started.

I left in a wheelchair, barely able to walk more than thirty feet before losing my breath and becoming lightheaded. I was placed on a five-day-a-week rehab schedule, two hours each day. I slowly began regaining strength and basic motor skills. The greatest challenge was learning to work with my hands again. They had taken the brunt of the explosion and the heat had seared off a lot of the nerve endings in my fingers.

The nerves in my hands had become hyper-sensitive to the extent that everything I touched, even the hair on my head, felt like needles puncturing my skin.

I had overcome injuries before. Sprained ankles, broken bones, even a few cuts that required stitches, but this was different, and different can sometimes be very terrifying. For weeks, each session was more painful than the last, some days I thought about making up an excuse not to go but I knew that I had to keep going.

Therapy consisted of desensitizing my hands and stretching them to regain flexibility. Every day was a struggle but I had family and friends that believed in me and continued to push me to get through it. During my visits to rehab I started developing relationships with other burn patients, two of which have become my inspiration in life to never quit, to never give up on myself. Blake Deleon, who was involved in an accident identical to mine, and Joshua Robertson. Both these gentleman were burned a great deal more than me and continue to live life and strive to improve their abilities each and every day. They don’t know this but I truly look up to them. Weaker men would have given up and thrown in the towel a long time ago.

Rehab became monotonous for me and the physical therapists noticed. They asked me what hobbies I had prior to the accident and without hesitation I told them fishing, particularly kayak fishing. Learning this, they assigned me homework; I was tasked to learn again how to make leaders. My worst fear was whether my fingers would ever heal and become nimble and strong enough to change out rusty treble hooks on my fishing lures. I looked at them and laughed because at the time I could barely brush my own teeth, much less tie loop knots or deal with split rings and treble hooks.

Raised up as a child to never be a quitter; I took the challenge. Seeing my closest friends overcoming their own fears told me there was no reason for me not to dive in headfirst. I started out simple with making some heavy-duty bull red leaders, learning again to use the crimping tool, to fashion tackle I could use when fishing from some of the piers down in Corpus. After becoming proficient with these tasks it was time to regain strength to be able to load and unload my kayak…if I was ever going to get back on the water.

What once took ten minutes was now an hour-long process that left me wondering if mastering this was even worth the hassle. But I wanted to get on the water and I wanted my freedom back. So I continued and managed to push through the pain and struggles. I continued making progress and finally made it out to one of the local lakes near San Antonio.

I didn’t catch anything but finally being back on the water gave me a glimmer of hope and that’s all I needed. With the dream of someday going offshore and hooking up with a kingfish still in the distance, I decided to venture into making my own stinger rigs. That was a challenge. Bending wire can be tough with good hands; doing it with hands that barely worked made it even tougher. After going through yards and yards of wire due to failed haywire twists, I eventually became halfway decent at it.

Around that same time, a close friend invited me to join an offshore kayak trip. Getting the OK from rehab, I thought to myself, it’s now or never. So, as it turned out, I landed my first kingfish less than six months after being released from the hospital!

Having set that as a goal and crushing it is what gave me the motivation to never give up on myself. Trust me, there were days that I didn’t want to get out of bed, lying there wondering over and over, WHY ME?

But fishing saved me. Fishing gives me a way to challenge myself every time I’m out on the water. My getaway from the world; completely focused on becoming a better person; learning not to dwell on that which I cannot control.

I no longer ask, WHY ME? I now ask, WHY NOT ME? I believe I was put through this whole ordeal for a reason; to be a role model to give others hope. To show others suffering great affliction, that no matter what you’re going through, you must NEVER give up on yourself.

You have greater strength within you and you are capable of greater things than you could ever imagine. If I can inspire just one person to never give up and to believe in themselves, I believe I will have fulfilled the true reason for having survived my accident.