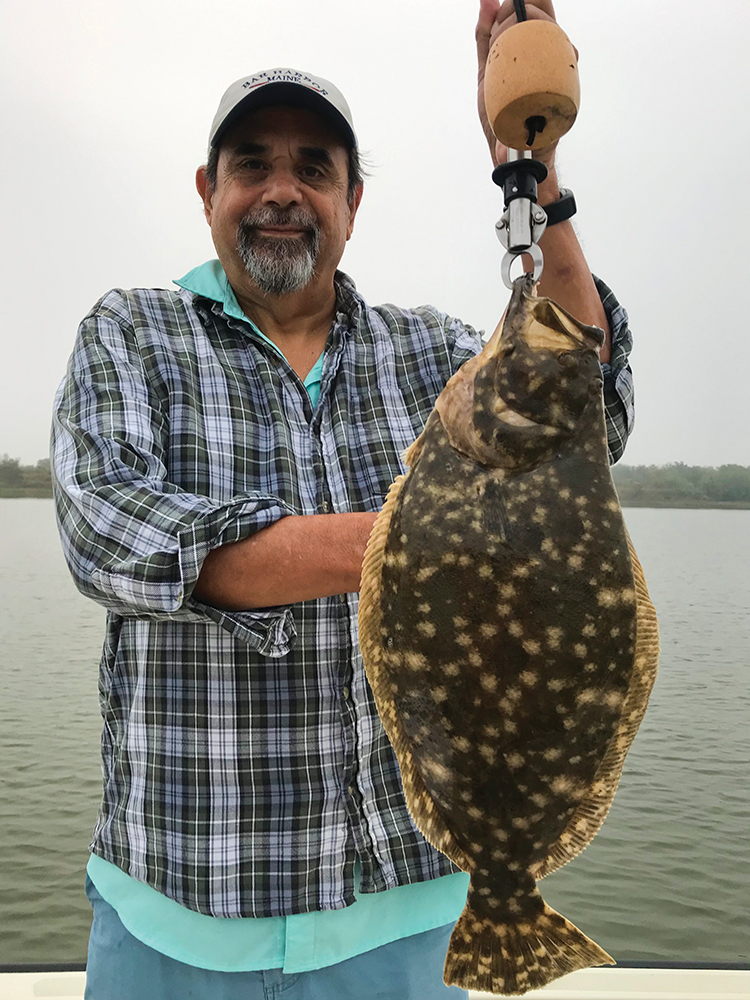 Ron Chapa with a beautiful five-pound flounder. The past year rewarded us with quite a few of these here on the Upper Coast!

Well, here we are. Another year almost in the books. “Some dance to remember. Some dance to forget.” Although the context was slightly different, this line from the Eagles Hotel California summarizes how most of us feel about 2020.

Similar to 2019, I started out fishing mainly in East Matagorda Bay. Unlike 2019, we didn’t seem to catch the larger trout we had previously experienced. This is not to say that the fish were small. Many were in the 3- to 5-pound class with an occasional 6-pounder. The heaviest client trout weighed a smidge less than 7 pounds. The numbers were certainly impressive, though. The second week of January 2020 was crazy with us catching 100 to 150 keeper trout before 11:00AM most days. We could’ve caught more but pulled off of them to look for reds and larger trout. Speaking of redfish, they were also easy to come by.  MirrOlure Provokers were the best soft plastics during this stretch, especially for larger trout.

Another thing we experienced was catching many more fish when drifting versus wading compared to the prior year. We had a few good wading trips but the majority of our fish were caught drifting shell in 4- to 6-foot depths. Color streaks created by wind or current along with areas of active mullet were the most productive. Occasional slicks were another indicator. The only reason I can think of for this pattern change is that the majority of the bait seemed to be out in the middle of the bay most days. The few shoreline areas that were holding mullet were our best wading spots, but there were only a few. These shoreline areas also possessed characteristics such as marsh drains and bowl areas containing softer bottom and nearby shell.

MirrOlure Lil Johns worked very well, especially when drifting because of their faster sink rate and smaller size compared to other soft plastics. I probably threw fewer plugs (Corkies, MirrOdines, MirrOlures, etc.) last winter than ever before. Shrimp and small shad stayed in the bay longer than usual, so we stayed with smaller Lil Johns and Saltwater Assassin Sea Shads.  My guess is that a colder winter would have sent the smaller forage to other environs and we would have experienced a better plug bite with mullet and pinfish being the primary food source left in the bays.

Back here in Galveston, our focus was shallow flats with scattered shell adjacent to deep guts. We had some 30 and 40 fish mornings but very few trout in the older age classes. Most ranged from 15- to 17-inches but we did land an occasional 4-pounder with the heaviest weighing 5.25 pounds. The smaller keepers were 2 to 3 year old trout, which makes sense considering that the majority of the Galveston Bay Complex turned completely fresh a little more than three years ago when Hurricane Harvey dumped almost 60 inches of rain, forcing most of our trout through the passes to the Gulf of Mexico. I firmly believe they took a hard right to head westward toward the next available bay system with favorable salinity. In other words, we basically started over in late-August 2017 and we’ve been rebuilding our fishery ever since.

February and March were actually pretty good months both here and in Matagorda on the days we could fish. February was very windy with a few fronts bringing hard north winds although none of them dropped the water temperature very much. Historically, March is one of our windier months but March of 2020 was very fishable for the most part and fishing was good both wading and drifting. There were actually birds working in several areas and they had decent keeper-size trout under them.  Things were clicking along pretty good until around the time of the Houston Fishing Show during the first week in March. Unfortunately, our country came to grips with the fact that we were in the midst of a very contagious Covid 19 pandemic. Many of my clients began cancelling trips, not only because of the virus but because of financial concerns as a result of shutdowns and quarantine measures. What few trips I ran were from noon to sunset during the best bite period. It also helped us avoid extra heavy boat traffic as folks were “quarantining” in their boats. Even weekdays were crowded! With so many people living on the water and “working from home” it became too easy to just drop their boats out of the slings and go fishing. Most trips were spent wading while throwing topwaters and tails with the best bite coming very late in the day after the crowds dissipated and fish pulled up tight to the shorelines.

We bounced around all over multiple bay systems during April, running what trips hadn’t been cancelled because of virus related issues. We fished East Matagorda, Lower Galveston Bay, West Galveston Bay and Upper Galveston Bay. Wind direction, wind speed, water temperature and salinity dictated the areas I would target. Trinity Bay was still very fresh because of excess runoff coming down the Trinity River from rains in the Dallas area and East Texas. Bookings seemed to be returning somewhat back to normal as many folks realized that being outdoors was a healthy escape from the chaos of the pandemic. Then, on April 20, 2020 oil dropped to negative $37.63 a barrel (West Texas Intermediate).  Unfortunately, many of my regular clients are in the oil and gas business. Needless to say, my phone started ringing with cancellations. Fishing remained good but there weren’t many takers.

The month of May was plagued with high winds and inconsistent fishing overall, not to mention lingering economic impact of the pandemic. I ran only 13 trips, which is probably the fewest ever for that month. Most days were spent drifting shell reefs and shoreline structure, working what few slicks we could find. We also caught trout under birds in West Galveston Bay but we had to weed through tons little ones. Flattening the barbs on our jigheads at least made for quick releases of the small fish without harming them – Lord knows we’re going to need them down the road! Overall, it was definitely not one of my better Mays to remember.

June and July brought us very few fishable days due to prevailing south and southwest winds. However, we did have more than a handful of good days drifting and wading certain areas. Most of the areas where we caught fish were nook and cranny type spots with live oysters present in 2.5- to 5-feet of water. Lil Johns, Sea Shads, and Rapala Skitter Walks provided us with some 15 and 30 fish days. We also had some 10 fish days, too. As usual, we caught countless trout ranging from 10- to 14.5-inches. It was uncharacteristically inconsistent for that time of year.

August and September found us fishing West Galveston Bay more than I have in a very long time. Don’t get me wrong, I’ve fished West Bay for many years, but seldom during these months. This is yet another example of how much our trout pattern has changed, due mainly to environmental changes (primarily habitat). The trout we caught in West Bay had some pretty good ones in the mix, up to 6 pounds. I believe these were fish that came in from the Gulf and took up residence over the live oyster reefs and seagrass beds we were fishing.

October and November found us travelling back and forth between Matagorda and Galveston again. Our better days were in Matagorda, but Galveston produced some decent days too, especially near bayou drains and in back lakes. Trinity Bay finally got salty again and we started catching a few over there as well, but only in a few spots. Wading and drifting grass was the ticket down south for trout up to 6 pounds. There were also plenty of birds working over migrating white shrimp. Grass and shell were the ticket here in Galveston Bay. While there were birds working here, most of the trout beneath them were undersized. The one thing that really stood out to me was the number of good-sized flounder we caught here. Last year was similar but this year seems to be even better, especially for larger flat fish.

It looks like more of the same to close out 2020 with warmer than usual temperatures. There are a couple of cold fronts in the forecast as I type this but I don’t look for much to change. I pray for colder weather so we can experience some true wintertime patterns. There’s nothing like wading in cold overcast conditions and catching thick wintertime specks on plugs! Happy New Year!