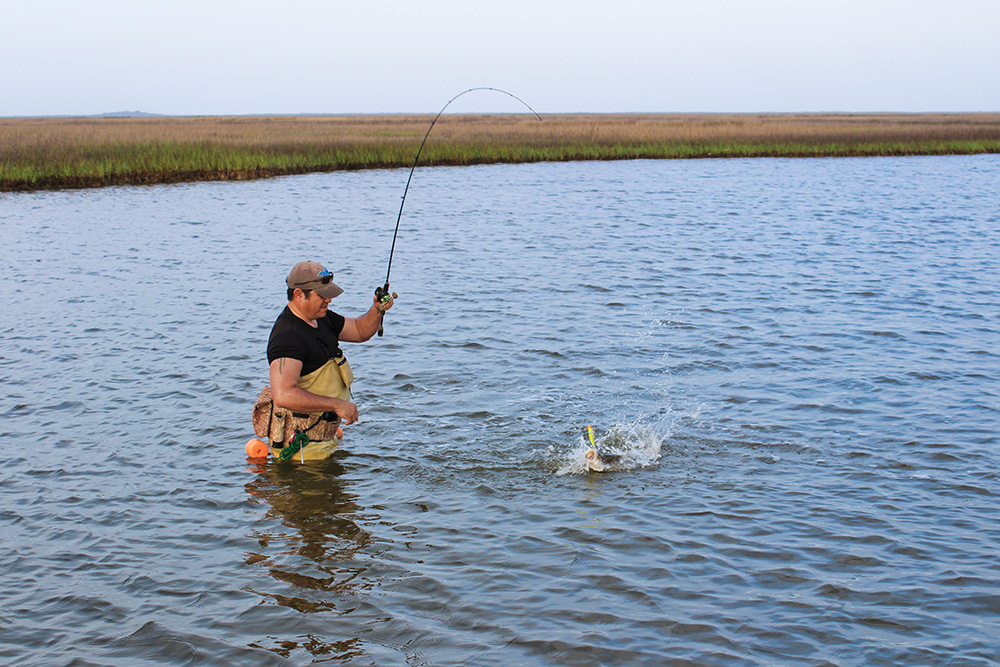 The serenity of a secluded shoreline was well worth the long distance traveled for Eric Orril. The bonus was catching dozens of trout and reds on topwater! Fish that are far removed from popular areas tend to be more cooperative in my opinion.

It was early in April and we had been on a roll of catching very nice trout with relative ease, fairly close to home.A go-into-hibernation-type winter followed by a spring warm-up period had really triggered our bite.Rare for the season, light early-spring wind further aided in our success.I simply couldn’t do anything wrong and my customers were probably thinking I was really good at my profession.As the old saying goes, “Somebody pinch me…I must be dreaming.”

A late-appearing cold front made a couple of other phrases enter my mind.“Nothing lasts forever,” and “All good things must come to an end.”The northeast wind was brisk as we departed from the end of the Texas City Dike, but it felt even colder given that I had become somewhat acclimated to the recent warmer weather.The ride across the Houston Ship Channel wasn’t fun at all, even in my battleship Whaler, but we made it to the ICW with only a few loose screws (I’m talking about the ones in my boat).Our options were very limited as Galveston Bay doesn’t offer much in the way of seagrass or coarse sand bottom to promote water clarity.To the back of East Bay we went!

The cold wind made the 20-mile boat ride seem more like 40.At one point one of my clients asked if I was taking them to Sabine.I chuckled and said, “Ha!Maybe!I’ve got 77 gallons of gas, a lot of time, and I’m feeling pretty mad at ‘em today!”

Not knowing what to expect with the sudden weather change, I perused a few areas that had been good to me under similar conditions in the past.Our third stop proved fruitful.Streaky water and small well-defined slicks over scattered oyster and clam shell near deep water showed me all I needed.The only thing missing was a big billboard screaming, “Fish Here!”

The action was sporadic but steady enough to keep things interesting.Unfortunately, the bites were subtle, resulting in many missed opportunities. The wind subsided after a few hours which enabled us to explore other options, only to find dead water at every stop.I told my clients that now would be a good time for them to eat whatever they brought for lunch because we were going on a little boat ride.

Thirty minutes later we were drifting color changes in the far reaches of Trinity Bay over structure similar to our first stop.I failed to mention that the tide movement had ceased at stop number one, which definitely had a negative effect on the trout feed.There were also other boats at just about every stop I wanted to make along the way.The tide in the area we were now fishing was several hours behind the first locale we fished which further warranted the move.At the end of the trip everyone was satisfied and I was praying I didn’t have to perform similar maneuvers the next day.The bottom line is that we did what we had to do to have success.

There was another time in the early-2000s while fishing the Specktacular Tournament when my partner Aaron Wagner and I were greeted with an unexpected and very unwelcome turn of events.Our morning began catching cookie cutter 3-pounders on topwaters in slick conditions along East Galveston Bay’s north shoreline.After about an hour, out of the blue came brutally stiff southwest winds that transformed the tranquil bait-filled shoreline into liquid mud covered with whitecaps.Waves crashed over our heads as we waded back to the boat.

Obviously needing heavier specks to compete, we made a “little run” to the far western end of West Galveston Bay.Campbell’s and Chocolate were among the stops we made along the way.We were able to upgrade a couple of our trout but not enough to win first.It seems like we ended up around third or fourth.My old friend Judd Johnson was behind the mic at the weigh-in interviewing the top finishers.When he asked us what area of the bay we fished I said, “We caught our fish in East, West, Chocolate and Campbell’s.”I can still see the look on everyone’s faces as they thought I was joking.After all, who in their right mind would fish four different areas spanning more than 50 miles?Loose screws maybe?The funniest part is it was the truth.

There was another time I met my customers at a ramp in West Bay then had them follow me to the back of Trinity Bay due to unforeseen weather changes.My truck holds plenty of diesel too!I can go on forever about making long runs to far reaches of Galveston Bay and even completely different bay systems to increase our chances.There are no limits when there are opportunities.

I used to think that staying in one area and waiting out the bite was a smart plan but I’ve learned over time that bites may come more easily (for various reasons) miles away.I am personally willing to stay put and wait, especially if the quality of trout is there.Most paying clients, however, want more frequent action.

The pattern can change overnight and you better have a Plan B or even a Plan C.Late cool fronts, wind shifts and boat traffic can alter plans.

As cold fronts become less severe and less frequent, trout will begin to vacate their deeper, muddier haunts en route to forage-filled shallower and warmer water.Knowing the path they use to get there helps shorten the learning curve.The trout migration pattern is nearly the same every year in every bay system along the Texas coast.I believe trout are programed to return to the same areas each year.The timing of this instinctive return can be altered by water temperature, salinity, forage supply, habitat and fishing pressure.Aside from fishing pressure, the other factors are directly correlated to one another.

An astute angler will follow seasonal patterns while making mental notes of which factors trigger fish to be where and when.For example:I can remember fishing a late-March Specktackular Tournament after an exceptionally cold winter with my buddy, Jake White. We pre-fished areas that historically produced but our findings were somewhat disappointing.A few days before the tourney we decided to try one of our winter spots as the conditions more closely resembled February than late-March.After catching and releasing several trout to 6-pounds we now had a plan for tourney day.This area consisted of gooey, mud-bottomed guts that tapered off into the Intracoastal Waterway and 25 feet of water.We waded along the guts and caught most of our fish before the sun came up on solid black Super Spooks.There was never a boat near us because those fish weren’t supposed to be there.

So far, this spring, water temperatures seem to be on the rise earlier than expected and fish are showing up in places about a month early.It’s kind of crazy when we think about how frigid the past winter had been at times. Notwithstanding, April will still provide us with her own set of hurdles in the form of late fronts and extremely high wind.Boat traffic is a given these days.It pays to be cognizant of every variable that will manipulate the migrations of our beloved trout.One day they will be on the shorelines and the next day they’ll pull out deep on nearby structure.Knowing the cause and effect will greatly increase your “luck” even if it means burning a little more gas.