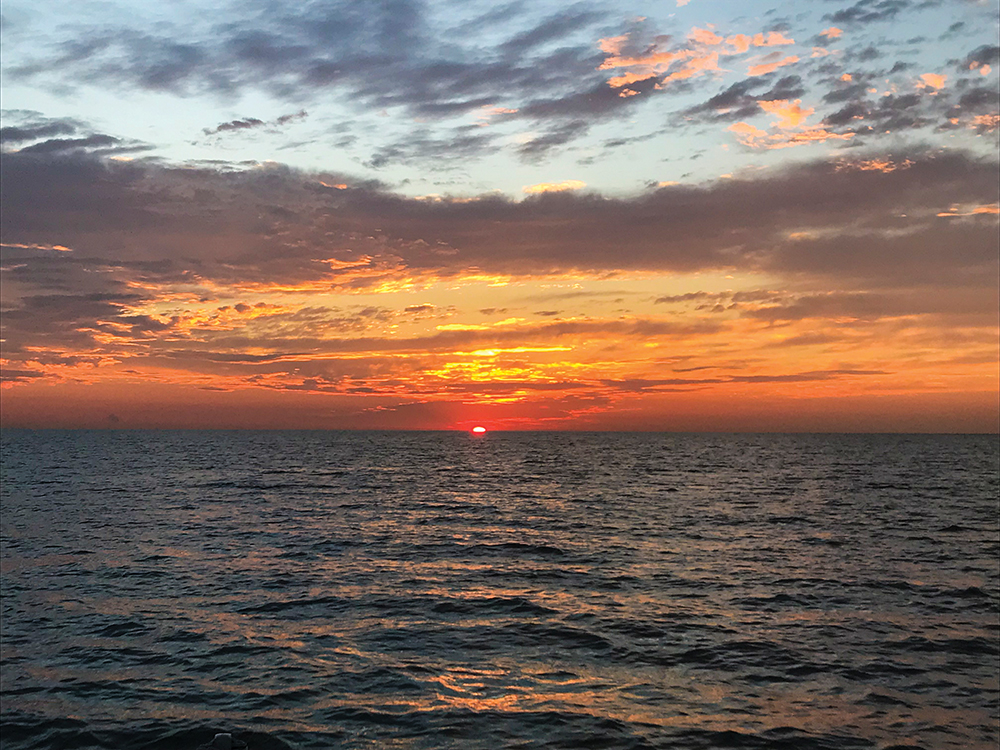 Wide open spaces on this beautiful fall morning! Very thankful for every single sunrise. It never gets old.

October has become known to many as the beginning of fall fishing along our Texas bays.  Officially, the first day of fall this year was September 22nd which is when the autumnal equinox occurred.  “Officially” the trout couldn’t care less about dates on a calendar.  “Official” dates and labels aside, during most years our “fall” pattern really doesn’t kick into gear until November.

While there are plenty of cool days during the Halloween month they’re seldom cool enough to concentrate trout.  As a matter of fact, the weaker early-fall fronts tend to actually scatter fish.  I tend to find more tricks than treats during this time because of this.

Please don’t misunderstand, fishing is always fishing and we’ll usually find ways to succeed whether we’re donning short sleeves or jackets.  However, for me at least, November is when our true fall pattern begins and it is also when I get a little extra jump in my step.  What most folks (including me) commonly refer to as the “transition” is now in our rearview mirror and nothing but good stuff paves the road ahead.  Now it’s time to get down to business!

November is when “cool” fronts will become “cold” fronts and noticeable changes will take place throughout our estuaries.  Water temperatures will drop significantly for the first time in many months.  Back lakes, bayous and rivers will begin to breathe life into our bays and trout will tend to show themselves more frequently as they gravitate towards these arteries.  Timely rainfall has contributed to a boon in shad and shrimp throughout the entire Galveston Bay Complex this year.  This rich food supply coupled with aggressive feeding should produce easily identifiable slicks.  I’m talking about the small, well-defined, hard-edged slicks.  Not the long, bled-out looking ones.

It’s important to understand the difference between the two.  The small oil-rich slicks are fresh whereas the large spread out or bled-out slicks are old and in many cases weren’t even caused by trout.  Of course there will also be flocks of gulls and terns losing their minds as they swoop down to grab white shrimp that are going airborne in an effort to avoid becoming an easy meal for trout and reds.

Man, it must really suck to be a shrimp.

I like and appreciate virtually all lures.  Kuddos to all of the successful and ingenious lure manufacturers out there who continuously come up with new designs to give ole boys like me the upper hand. All fake baits have their time in the spotlight over the course of the year, but some lures really stand out to me and tend to ratchet up the excitement to an entirely new level.

Who doesn’t love the rush of a solid speck crashing a topwater?  Or how about an amped-up late fall frenzied speck damn near taking the rod out of your hand when she hammers your floating twitchbait?

Various varieties of both baits will take center stage during the better part of this month.  My short list of favorites includes MirrOlure She Dogs, Rapala Skitter Walks, Borboleta Lele’s, and Texas Custom Lure’s Double D MirrOlure.  Another new bait I’m looking forward to using is the Lele S which is a sinking version of the floating Lele twitchbait.  I have a feeling there will be some stud trout caught on some of the lures I’ve mentioned, especially when the water temperatures really begin to decrease.

Fall doesn’t come without its surprises but learning how to make the proper adjustments makes it even more fun than it already is.  A steady and predictable pattern can change within 24 hours with the passage of a cold front leaving us scratching our heads.  Not only can water temperatures drop very quickly but some fronts bring several days of heavy downpours causing salinities to drop which can force fish into other areas.  Some salinity changes can come on very quickly and can actually be seen with the naked eye while others take longer and may be subtler.

In addition to my usual on-the-water anecdotal approach there is a surface salinity forecast website that I use as well.  It is computer generated information based upon hydrodynamic models but it provides me with a good visual of not only the surface salinities throughout our bay system but also the directional flow of fresh water within our system.  You can find it at:  https://tidesandcurrents.noaa.gov/ofs/ngofs/ngofs.html.

This URL will take you to the Northern Gulf of Mexico Operational Forecast page.  Just click on your bay system (NGOFS Subdomains) on the left side of the page to bring up a map of your bay system.  Below the map will be a list of choices from which you can choose - water level, wind, water temperature, salinity and currents.  Clicking on “Nowcast” beneath your desired category will bring up the animated map.

Water clarity can also pose problems when there’s excessive freshwater runoff entering the bay.  This is when darker colors and higher-pitched, noisy plugs come into play.  Soft plastics in Red Shad, Morning Glory and Texas Roach are always great choices in dirty water.  High-pitched topwaters such as She Dogs, Skitter Walks and One Knocker Spooks are great choices for surface plugging.

Fronts typically bring wind but unless it’s gale force, November provides excellent wading options along protected shorelines.  Fall wading can be some of the easiest of the entire year as marsh drains feed adjacent shorelines lined with soft bottom and small oyster reefs.  Wading near guts while keying on active mullet and slicks can produce some solid pulls from not only trout but plenty of reds and flounder.  It’s an easy pattern to follow.  Speaking of oysters, I’ve noticed more and more live oysters in certain areas we’ve fished.  This is great news considering that a little more than a year ago Harvey’s freshwater killed so many of them.

Another thing to get excited about, especially later in the month, is seeing an increase in the size of trout caught.  Our chances for better quality fish typically increase with each passing cold front.  These larger trout instinctively gorge as the water temperatures decline, almost as though they can sense winter is coming and food will soon become scarce. We will still catch plenty of little fellers in the mix but I have a theory on why more large trout will begin to show themselves.

Teenagers come home from school every day and raid the pantry.  They basically never stop eating.  High metabolic rate juvenile trout possess the same characteristics.  As we get older our metabolism slows down and we’re not hungry as frequently.  However, when we do get hungry we can be known to gorge.  I firmly believe that mature speckled trout behave the same way.

November possesses so many benefits that I have to pinch myself.  It’s in the top three of my favorite months to fish.  The crowds are usually lighter, the air temperatures are very pleasant on most days and the fish are generally bigger.  If we get blown off of the water for a few days then I can head south for a little deer hunting or I could team up with a couple of buddies and go duck hunting.  For these things, I give thanks.  I hope everyone has a fun-filled Thanksgiving.  God bless!