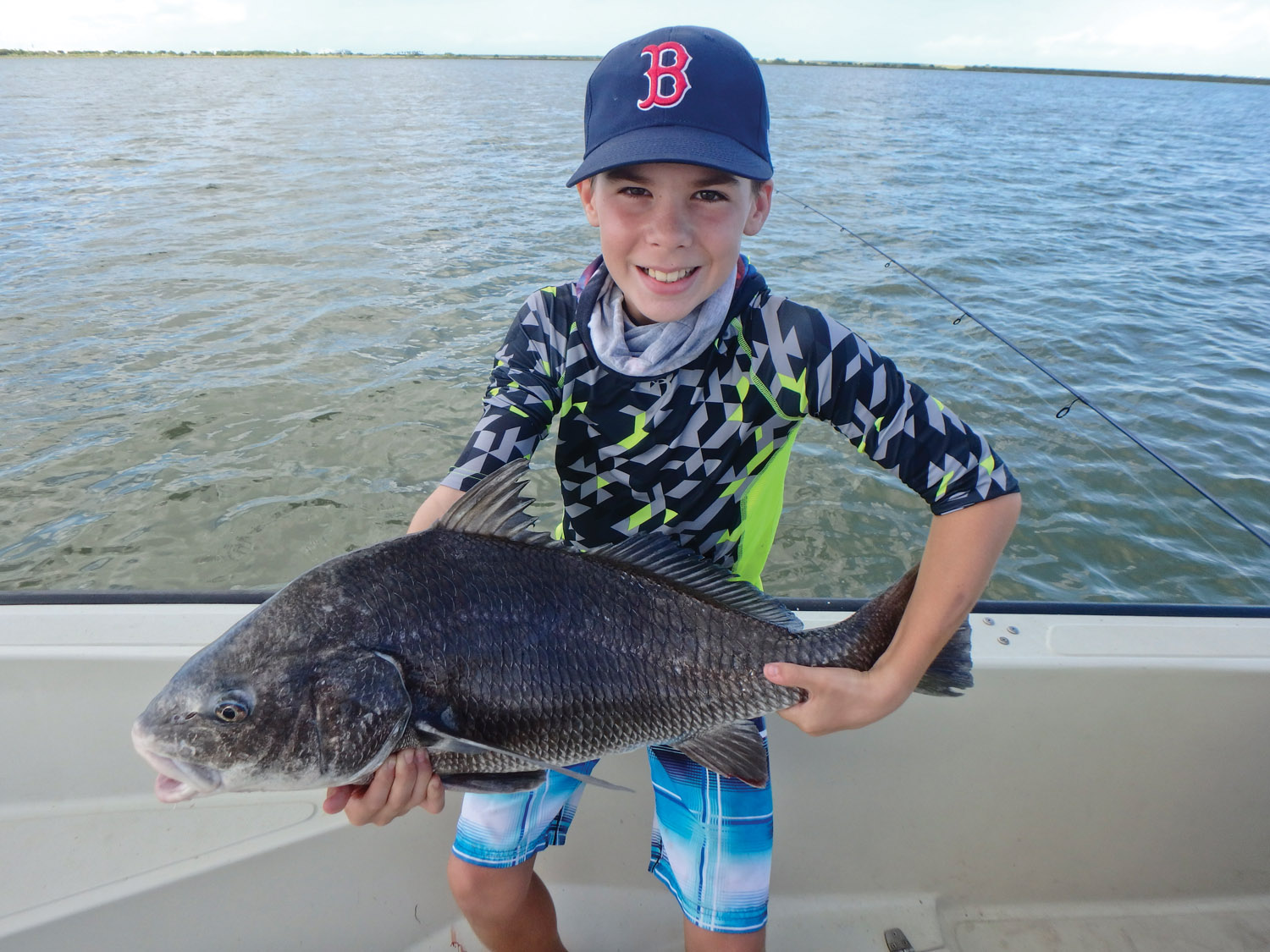 Conner Woods along with brother, Ryan, didn’t seem to mind the drum gobbling up their MirrOlure Soft Shads.

I must say I have been pleasantly surprised at how quickly our bays recovered from Harvey’s massive floods. We started catching a few fish about a week later, albeit mostly undersized trout and reds that had been flushed from the marshes and back lakes. Equinox tides and wind-enhanced tide flows caused exaggerated tidal exchanges which resulted in increased bay salinities sooner than any of us could have imagined. Decent fishing followed. By October, our success rates improved even more as white shrimp filled our bays. Undersized trout are in every corner of the bay but keeper-sized specks are mixed in along with an occasional four-pounder. The redfish (including over-sized) and flounder availability seems to be above average as well. I think our chances are good for a respectable winter fishing season.

When I was growing up I loved it when my mom would bring us Neapolitan ice cream from the grocery store. I’ve always had a penchant for chocolate, vanilla and strawberry ice cream. The ingenious creation of Neapolitan satisfied all three cravings in one bowl. I enjoy watching baseball, football, golf, basketball and even volleyball. I don’t get to play much golf these days because fishing tends to consume me, but I sure do miss it.

My obsession for duck hunting almost landed me in divorce court when I was younger, and spring turkey hunting provided an adrenaline rush that ranks up there with catching a nine-pound trout. There’s nothing like using a diaphragm call or box call to induce a 30-minute conversation with a mature gobbler. But it doesn’t end there. I’ve had some long-bearded toms go silent for ten minutes or so, leading me to believe they’d lost interest, only to have the silence broken with an unexpected and exuberant gobble from fifteen yards behind that would blow you out of your hunting stool.

After a long year of fishing there’s nothing better than looking through the small mesh opening of my bow blind on a chilly late-December morning down in God’s Country (aka South Texas). Maintaining a healthy dose of variety in my life has always been a major contributor for sustaining happiness. I try to take advantage of that same variety when on the water by moving around to different areas and targeting multiple species, using a variety of techniques.

Through the years, December has become one of my favorite months to fish because trout, redfish and flounder are easy to catch on a daily basis. Having an assortment of species from which to choose can offer a fun change of pace away from the grind of targeting mostly speckled trout. Often, all three species can be caught while fishing the same spot. I catch more flounder in December than any other month, and usually by accident.A Corky is flounder candy, by the way. When we do specifically target them a MirrOlure Soft Shad is very hard to beat. My Waterloo Ultra Mag is the ultimate rod for feeling the soft bites. The back lakes and bayous hold plenty of redfish this time of year and they’re not bashful to crush small topwaters – Super Spook Jrs and MirrOlure She Pups. Of course, you can never go wrong with a variety of soft plastics or a gold spoon.

I tend to focus on smaller areas this time of year compared to summer and fall. Open-water drifting becomes a lower percentage play. As water temperatures decline, the odds for catching healthy fish over soft-bottomed areas increases. Slight undulations near small oyster reefs with some current set up nicely. Every corner of the Galveston Bay Complex possesses the right elements for success as the mercury drops.

Marsh-lined flats, bayous and guts all come into play.Characterized by lower-salinity nutrient-rich and often warmer water, forage species are naturally attracted to these areas. Larger predator species up the food chain naturally follow. Once we arrive to one of these areas I simply survey the layout while looking for something that jumps out at me such as presence of mullet and color streaks.

One of the best things about December is you can fish just about any time during the day. You don’t have to rise early to beat the heat and, more often than not, the late afternoon bite can be exceptional. Moon positioning and tides play a larger role in your opportunity for success than time of day. Cold fronts also influence the timing of when to fish. Not all cold fronts are created equally. Strong fronts with substantial temperature drops and increased barometric pressure will often shut down a good bite immediately following its passage. This is when we might wait two days and start our trip midday and fish until dark. This gives the water some time to warm a bit and the pressure to stabilize.

We often get some weaker Pacific fronts during December, compared to later in the winter. These types of fronts are usually characterized by heavy cloud cover for several days and are by far my favorite conditions to target better quality fish. The overcast skies and lower pressure associated with such fronts will usually find us wading small shallow areas (2- to 3-feet) not far from deeper water, while chunking either MirrOlure’s Paul Brown Original Fat Boy or MirrOdine XL over scattered clusters of shell. Ideally, I like the water temperature to range from 50 to 59 degrees for optimum results. Once the water temperatures creep back into the 60s we typically spread out over larger flats and switch to soft plastics and topwaters to cover more water.

Contrary to popular belief trout, reds and flounder do not base their feeding habits or locations upon a calendar. In other words, just because it’s winter doesn’t mean that we should all grab our Corkys and go find the deepest water possible, to work our baits slow and near bottom. The conditions will always dictate how we should go about our business when planning a trip. I remember last year at this time when we were catching really nice fish on topwaters and soft plastics drifting over hard shell in 7-foot depths. Birds were working all the way through Christmas as well. That being said, it seems that winters following hurricanes have historically been colder – so who knows what’s in store.

I have personally witnessed what has once again become a robust flounder fishery, especially over the past couple of years. Some of my friends who target flounder share the same experiences. I mainly attribute this to the implementation of stricter limits by the Texas Parks and Wildlife Department along with adequate rainfall. Timely freshwater inflow has contributed to an abundance of shad, shrimp and mullet over the last three years. TPWD would be wise to implement the same good management practices for our trout here on the Upper Texas Coast by reducing our limits to five. There’s no better example than the improvements we’ve seen in the trout fishery south of here.

Management priorities will determine whether our fishery is managed for liberal limits and smaller fish or more restrictive limits and larger fish. I choose the latter. In the meantime, we’ll continue to do our part as responsible anglers by only keeping what we need and releasing the larger ones so that someone else can have a shot at a trophy.

Additionally, mixing things up a bit and catching reds and flounder takes pressure off the trout and, based upon what I’ve seen, we should have plenty of opportunities for that.