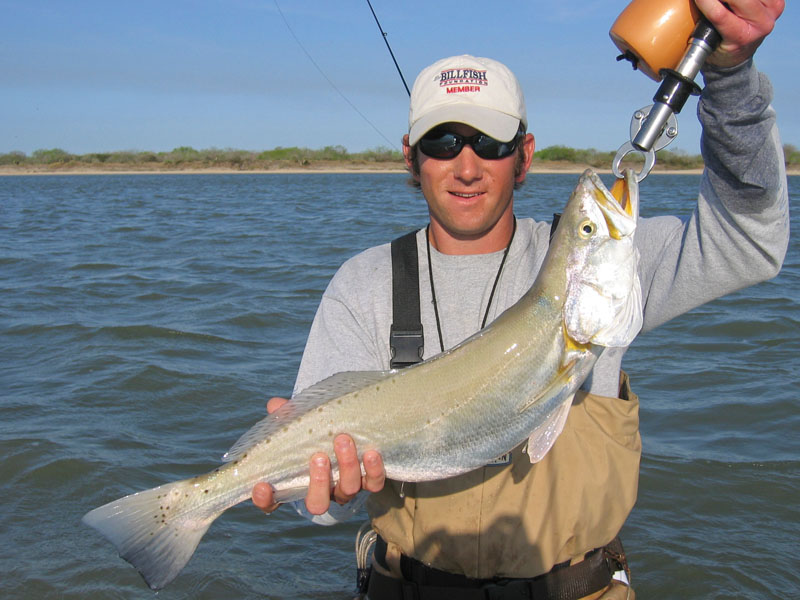 There was no bait on the surface this post-front high-pressure day but Jeramiah Sullivan managed to catch and release this beauty.

Spending the better part of the last eight months drift-fishing with soft plastics was fun. Now the weather is changing and we must change with it by utilizing different strategies when targeting speckled trout. Adjustments will have to be made with locations, lure choices, retrieval methods and timing to experience continued success. For those who like using mullet-imitating plugs–your time has arrived!

When water temperature declines, especially into the low-fifties and upper-forties, trout become more concentrated in areas with thermal protection and easily available food supply. Bait concentrations don't necessarily need to be large rafts of mullet and these can sometimes be difficult to find anyway. A trout's metabolism will slow during the colder periods to where heavy feeding will not be necessary to sustain the energy level needed. The consumption of one mullet in 24 hours may be all that is required in some cases. Also, keep in mind that just because bait is not visible on the surface doesn't mean that it isn't there. I've heard stories of fishermen running miles of shoreline trying to locate jumping mullet before they'll start fishing. I can tell you from experience that there are days during winter when you better have a full tank of gas and leave your rods at home if that's the first part of your plan. While "Find the bait, find the fish," has some validity; just remember that it's not always that obvious.

Galveston Bay's vast 600 square mile complex will shrink by more than half when considering high percentage areas for winter trout. A similar scenario will occur in other bay systems along the Texas coast. Fewer areas will hold trout compared to warmer months. This is music to your ears if you know such areas, but you might as well be playing golf if you don't. My daughter and I raised a pig (Banjo) to show at the county fair last year. I built an 8' by 16' pen in our back yard. The pen of course included running water and a feed trough. It also has a hot box on one end. A hot box is basically a dog house for pigs with a heat lamp in the ceiling. On cold days Banjo would stay warm and comfortable in his hot box. His food and water was close enough that little energy was exerted for him to eat. On milder days he enjoyed roaming the pen, but never far from his hot box. He spent warm days loafing in an adjacent fenced area a fair distance from his pen and even further from his hot box. His increased activity required him to eat more. Winter trout aren't much different than Banjo. They will seek refuge in deep guts, channels and bayous lined with heat-retaining mud when water temperatures are cold–low metabolism will not require heavy feeding. This is when slow retrieves and repetitive casts in the target area (gut or other deep zone) with a MirrOlure MirrOdine XL or Paul Brown Original can increase your chances at drawing strikes. Once their internal temperature becomes more acclimated and especially a day or two after a frontal passage trout will roam adjacent flats and reefs without straying too far from their safety blanket resulting in longer feeding periods. Sub-surface plugs such as MirrOlure 51 Series baits are a perfect fit for such scenarios. During extended warm periods trout can be found widely spread over flats. These are the days when topwaters and soft plastics can work well. Both styles of baits allow you to cover more water in less time therefore increasing the chance for more hook-ups. Salt Water Assassins, MirrOlure Provokers and She Dogs are fine choices. Every bay system has its "hot box." Learning where they are is a must.

There are many anglers who choose not to fish when the wind is blowing 20 mph and the air temperature in the 40s. Add some drizzle and they're on the couch for sure. The conditions I just described happen to afford more opportunities for winter trout success than most calm, bluebird days. This is true especially with regards to catching above average size specimens. Colder water lends itself to better clarity mainly because it greatly reduces the growth of plankton. Another variable influencing water clarity is wind. During the colder months the wind can be your friend because it creates turbid streaks. This boosts our chances of getting more and bigger bites for several reasons. Turbid water contains suspended clay particles which absorb heat, thus attracting baitfish and consequently predators. Edges of the streaks also serve as ambush points. The somewhat murky water also gives us an advantage when trying to trick trout with something made of plastic with dangling hooks. It has always been my opinion that trout can get too good a look in air-clear water to prompt a strike. Also, why would a mullet not swim 90 mph in the opposite direction when it can see its number one predator from a mile away? If it doesn't seem natural to us then I'm guessing it wouldn't to the fish either. Color changes or streaks over shell and mud and especially near bottom undulations create an optimum scenario for tricking big trout. MirrOlure's MirrOdine XL and Paul Brown Orginals are smart choices when working the edges of the color change as are soft plastics rigged on 1/16 ounce jig heads. Don't be afraid to cast into the middle of the cloudy water either as those wise old trout may make that one mistake. My largest trout to date (9.25 lbs.) was caught on an Amber/Chartreuse tail Corky Devil by doing this.

Though bottom habitat will vary, every bay system has them and they all create water movement. Bars, spoil reefs, points, worm rocks and finger reefs adjacent or perpendicular to channels all offer fantastic opportunities for catching winter trout. Wind-generated and tide influenced current in and around such structures present a Venturi effect which possesses all of the ingredients needed to complete the perfect formula for success. Increased current velocity caused by constricted flow through small openings (i.e. breaks in reefs, a large back lake flowing out through a narrow opening into the bay, narrow but deep gut centered between two shallow sets of rocks) are probably my favorite areas to catch cold-water trout. I love to cook around our house, but occasionally I enjoy going to a restaurant and being served. Trout will work for food when they have to, but they would much rather have it brought to them, being the opportunistic feeders that they are. Swift currents overpower forage species such as shad and finger mullet carrying them into the path of trout for an easy meal. Trout will maintain a headfirst position into the current usually staying near the outside of the flow where the velocity is weaker. Eddies are also created on the backside of rocks, reefs, etc. creating a reverse flow and swirling effect. Casting up-current allows your lure to take on a more natural appearance as it is delivered into the strike zone. This combined with plugging away at the edges of the current and into the eddies will cover every angle needed to yield positive results. There are a few bonus benefits to fishing these types of areas which further increase the likelihood of big bites. Moderate to fast current over soft bottom usually creates color streaks which we discussed earlier. Also, by timing your visit to one of these areas just right you'll get the benefit of warmer water. For instance, if the tide is scheduled to go out at 2 PM then plan on arriving just prior to stage in the area where the sun-heated water from a back lake flows out into the bay. Just a couple of degrees difference in water temperature could change your day.

Winter fishing is upon us and the opportunities are plentiful for those who choose to partake. The Farmer's Almanac says we're in for a cold and wet winter. Perfect! I know where I'll be and it won't be on the couch.