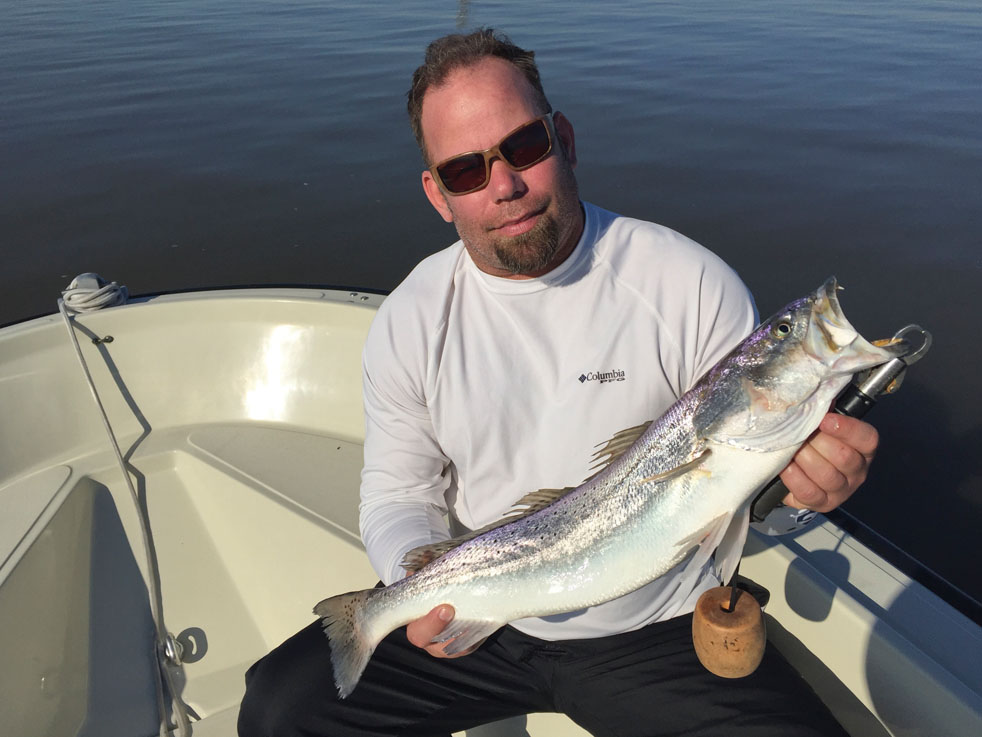 Keith Stringer with personal-best 27-incher (CPR); caught in a well-known area before others thought to check on it!

These days, a big trout isn't just "big"they're "slobs." They could also be called "bigs" or "toads." If they're just healthy three or four pounders, in today's vernacular, they're "solids." My, oh my, how things have changed!

My little girl just turned fourteen. She makes fun of the clothes I wear and some of the things I say. I'm not exactly stuck in the 80s, but damn those really were some good years. What she doesn't realize is that the Sperry Topsiders she's wearing were first popular in the 80s. Back then they were "rad" or "gnarly." Now they're "sick" or "swag." The same can be said for the pair of Chuck Taylor Converses she loves. Regardless of the slang used to describe how radical they are or their level of sickness, they're popular again after 30 years. The cyclical nature of clothing styles is nothing new. It seems everything runs in cycles.

Every bay system has popular fishing spots. Some produce good results year after year. Others, however, are productive for a year or two and then, for various reasons, go cold and are no longer popular. Such areas tend to fade from the memory banks of anglers as everyone tends to follow fishing reports to the latest and greatest hot spots. Much like styles, trends, fads or whatever you want to call them, "hot spots" follow a cycle.

Back in the late 90s there was a stretch of reefs that I absolutely loved to fish during late-winter and early-spring. We enjoyed many stellar wades along that stretch until others caught on and it became too crowded. I found other areas in different parts of the bay that were just as productive, all the while hearing stories of confrontations and the like until one day that area was no longer producing respectable results. It could've been the fishing pressure or some other reason, but anglers eventually looked elsewhere for their speckled pot of gold.

A year passed and as the conditions favored this area I decided to check on it. I knew from experience which tide, water temperature and wind was optimum for me to get a good representative sample of what was there. My results were poor with just a handful of small specks after hours of wading. A few other fishermen did the same. Their results were similar and eventually their information network led them to where the main show was taking place. This area became a distant memory for them.

The following year I paid a little visit to the spot. Conditions weren't perfect, but they were apparently good enough as we had one of the best big trout days I've ever experienced on Galveston Bay. We didn't wear out the area but we spent quite a bit of time there without another boat in sight. I concluded that this particular area was at its best near the end of a cold and wet winter leading into early-spring. It never produced the same results during mild winters. My theory is that the nearby deep water holds concentrations of trout during extended cold periods and the adjacent shallow reef is one of the closest areas providing the food and structure trout require as temperatures begin to rise.

I can give many examples of areas or spots that become less popular with a waning bite then become forgotten for months or even years. More often than not, such areas will rebound when you least expect it. The key is for YOU to be the one to expect it. Being the first one there when it triggers can make for a pretty special day.

It's inevitable though that someone will eventually notice you, the more time you spend there. In an effort to avoid the coming of the masses it's a good idea to plan your visits carefully. Foggy or rainy weekdays typically have less boat traffic. Also, this time of year the bite can be more aggressive later into the day and even at dusk. Most boats are off the water by then.

Spending too much time in the manner I am describing is a not a good plan. Two things will happen; folks will take notice and the area will become too congested to fish it the right way. In addition, if you fish it hard enough you will wear it out and the trout will move elsewhere.

In today's social media-crazed world the worst case scenario is that the wrong fisherman catches fish there and then posts away until his heart (and pride) is content and then the area becomes a parking lot. There's nothing wrong with posting a few pictures and reports, but you have to be smart about it. Common sense would say to wait a few days or weeks to post and don't include background that could give it away.

Don't fret if other boats eventually crowd the area because by then it's usually about the time another area could be turning on. It's somewhat of a cat and mouse game but works out perfectly if you're paying attention to seasonal changes, trout migrations, salinity, water temperatures, etc. An astute fisherman should be able to stay at least one to two weeks ahead of the crowds.

There are plenty of popular areas in every bay system of which most anglers are privy. The key is timing. I hear other fishermen talk about when this reef or that grass flat should turn on while even citing specific dates. "That area turns on around Easter." Really? Will I get to sit on the Easter Bunny's lap while I'm there? Can we hunt Easter eggs in the marsh until the trout show up?

I've said it before and I'll say it again: trout care about available food, habitat, water temperature and salinity. These variables all relate to one another and are responsible for the timing of a trout's arrival to a specific location. By paying attention to what you know about an area and the influencing factors, you can be the first (and sometimes only) boat there. It does involve the risk of not catching anything, however. If this occurs, just leave the area and find something else while keeping in the back of your mind that the area is due to turn on any day.

As crowded as our bays are nowadays, trout have likely seen almost every lure hanging from the pegs of local sporting goods stores. Try throwing something different. There's a lot of fishing pressure and I believe trout get used to seeing the same lures over and over again, and I believe I validated this theory on one of my recent trips. My clients and I were casting along a drop-off that went from 2.5 to 5 feet. Plenty of mullet were present and we were picking off an occasional trout but it wasn't great. There were definitely more fish along that ledge than what we were catching. I decided to tie on a hot pink 51 series MirrOlure (51MRHP) just to show them something different and see if it would make a difference. Needless to say, it's too bad I didn't have more 51MRHPs in the boat that day. MirrOlure Catch2000s, Corkys and Cotton Cordell's Broken Back are other excellent choices for providing trout with a different look, especially when using one that's customized.

I will wrap this up by saying that we have all likely come to the realization that there just aren't many truly secret spots these days. However, by staying a few steps ahead of the crowds and following the cycles, fishing some of the more popular areas can be just as productive as fishing a so-called "secret" one. As a matter of fact it can be downright "sick!"

"Stay tight dawg," and I'll look forward to seeing pics of the "slobs" and "solids" you post on Facebook. Please just do us all a favor and wait a while before posting.