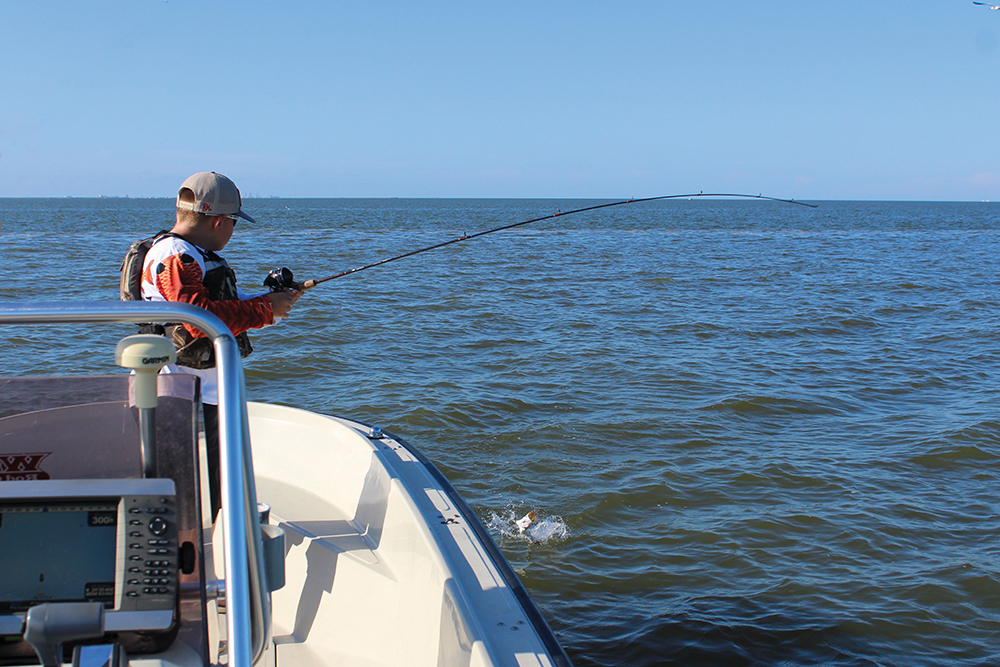 Working birds before water temperatures really drop can result in lots of little trout like this one Jackson Duckett is fighting.

I always strive to have a plan each day as I roll away from the dock. In years past that plan would usually work out pretty well and would result in something like this:

Pull up to our first stop – Fish show us where they are holding within the targeted area – Catch fish.

It obviously wasn’t always that easy, but it happened according to the plan quite frequently. Having said that, I have seen trout move from one place to another more this year than ever before, and now with cold fronts entering the equation, fish patterns will ping-pong back and forth even more.

Somedays, I feel like a quarterback standing in the pocket going through his progression reads. With progression reads, a quarterback’s mind is not necessarily set on getting the ball to one particular receiver but instead assessing the coverage and then going through a series of reads until he finds the open receiver. Of course, the quarterback has to always know where the receivers are to begin with, just like we have to know where the fish are. Let’s chat a little about how to not only find the open receivers but make all the right throws to score as many touchdowns as possible.

There are many possible scenarios this time of year and it’s imperative to understand how to address each one that presents itself. The best way I can do this is to recount some of my own experiences.  Notice I said “some.”  I’m only allowed so many words here so I’ll attempt to cover the most likely scenarios.

I recall an early November trip last year with Larry Drake and his daughter, Tamera. It was two days after the first strong cold front. A lot of our trout had previously been on the shorelines and shallow reefs but a sudden drop in water levels and water temperatures, along with an increase in barometric pressure, would cause some big changes overnight. This forced me to make a drastic move to an entirely different part of the bay.

The targeted area was a flat laden with thick clumps of oysters along a soft, silty bottom that tapered off into a series of deep troughs. Trout that had previously been hanging out on adjacent flats were now in and near the deep troughs parallel to the flats. As a bonus, this spot also offered protection from the stiff northeast wind we were experiencing.

We only witnessed a few flipping mullet here and there and there were no visible slicks.  By trolling down the ledge while casting into the guts and up on the adjacent flat we managed to trick dozens of trout to 24-inches and several mid-slot redfish. It was important to fan our casts to cover all depths as our fish were scattered along the ledges. MirrOlure Provokers and Saltwater Assassin 4” Sea Shads in dark colors rigged on 1/8-ounce heads got the job done.

A few years back I had a group of guys from out of town in mid-November. We were in the midst of a warm-up period in between fronts. The wind had switched to east-southeast and it was pumping at about 18 mph ahead of another front that was due to hit the next day. The tide was crazy high because of the stiff easterly wind and pre-front low pressure. The guys had booked well in advance and were only in town for one day so this was a one shot deal. I tried to talk them out of it but they weren’t having it.

Our original plan was to drift but the conditions wouldn’t allow for that. Sifting through my old duck hunting gear I was able to round up enough waders and boots to outfit the three of them. I’m sure it wasn’t very pleasant wading around in neoprene waders in 80-degree weather but we made it work.  We caught good numbers of very nice trout to almost 7-pounds while basically standing in the marsh grass casting out to small slicks that emerged over scattered clumps of oysters near a wide bayou drain. The fish were suspended so Red Shad Assassins on 1/16 ounce heads did a fine job. I also remember tricking a few on a chartreuse/pearl (83MR CHPR) MirrOlure She Dog. It was not what I originally had in mind but a few adjustments later, with the help of easy-to-spot trout slicks, everyone went home happy…including me!

Understanding bait migrations for the bay system you choose to fish can also provide a major advantage. Last November we had an abundance of white shrimp in back lakes and along shorelines. Early in the month small trout (mainly undersized) were feeding on them. While targeting small trout is not our standard modus operandi, it at least gives the savvy anglers a heads up for what should be coming next.

The smaller trout under the birds are typically replaced by larger (keeper-sized) ones as water temperatures cool with each passing cold front. This usually occurs around Thanksgiving here on Galveston Bay. There are obvious exceptions, such as delayed arrivals of stronger fronts. In this scenario larger trout under birds may occur in early December. I distinctly remember a stretch of days last year that occurred a few days after Thanksgiving where we caught a lot of very solid trout and reds while fishing under gulls and terns. There were very few throwbacks in the mix.

With cold fronts come eccentric tide swings. While we can always look at the tide chart we have to understand how wind and barometric pressure can affect tides. A strong north and/or westerly wind, which is typically accompanied by high barometric pressure, will push water out of the bay. The onset of such an event is a good time to be standing at the mouth of a bayou where a back lake empties into the bay. Conversely, a stiff easterly wind can cause bull tides (extremely high tides). The higher tides coupled with low pressure tends to push fish up tight to the shorelines (See out-of-town guys in neoprene waders two paragraphs above).

In summary, the weather is really the ultimate determining factor this time of year. A different scenario is created with each cold front. Learning which approach to take before and after each front will give you a major advantage. The stronger the front – the more drastically the pattern will change, and vice-versa.

November usually provides visual clues; slicks, bait concentrations and/or actively feeding birds. There will certainly be days (especially immediately following a strong front) where the water appears lifeless everywhere. These are the times we would want to most likely focus on deeper channels and structure. If you’re in an area where you know you have fish but maybe the tide just isn’t moving yet, you might want to stay put like the quarterback standing in the pocket and allow the play to develop.

Best of luck and Happy Thanksgiving!