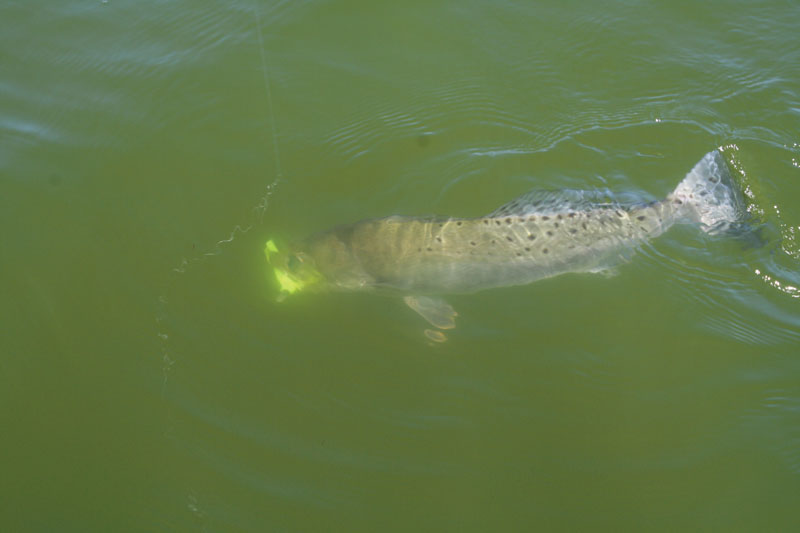 I'm an avid sports fan especially during football season. As a matter of fact my priorities can become a little out of kilter when there's a game to watch. And, this time of year, there's no shortage of great games.

A quarterback reading the defense and going through his progressions or a baseball team shifting position players for certain hitters both require careful planning and sharp instincts. Coaches and players spend tireless hours watching film preparing for each game. Preparing and implementing a solid game plan most often yields positive results. Of course, some players have more God-given talent than others, but some who may be a little short on talent make up for it with work ethic and timely decisions. Some have the skill set it takes to succeed, but just need more experience to excel. Devising a reliable game plan that addresses every possible variable presents the best chance to win.

The same applies to fishing. Having a successful fishing trip shouldn't be left to chance. So, how do we work our way through the minors to get to the pro level? What do we need to do to go from the practice squad to the big stage?

More Tools than Ever

More tools are at our disposal than ever before as technology has taken fishing to a whole new level. The days of triangulation and using a cane pole to find oyster reefs faded away in 1989 when Magellan rolled out the first hand-held GPS. In 1990 the United States Department of Defense deliberately decreased the accuracy for fear of adversaries using the system to their advantage. A full complement of 27 satellites was completed in 1995 with three of them to be used for spares in case any of the active 24 was to fail. In 2000 the Department of Defense ended the intentional inaccuracy of GPS which made it 10 times more accurate. Since then, the United States Air Force has launched additional satellites and now manages a constellation of 31 satellites plus three that can be reactivated if needed (source: The Rand Corporation, United States Naval Observatory, United Launch Authority, GPS.gov). If you're lost these days then you're in trouble. Taking the time to research or attend clinics to get the most out of your GPS will give you an advantage. Most marine electronics stores offer educational classes and there are online sources as well.

We've gone from Dacron to monofilament to braided lines and braided hybrids. Fishing lines are sensitive enough to almost feel a trout looking at your lure. FINS Windtamer is a great braid to choose while Trilene Sensation fits the build for old-school mono guys like me. Rods are more sensitive than ever with Waterloo leading the pack in my opinion. I've seen the results firsthand many times. Shimano is still king in the reel department for me. Once again, sensitivity being the dominant attribute along with light weight and casting ability. There shouldn't be any excuses for not feeling the bites with the pro-level equipment available these days.

In the fishing world, our game film is a fishing log. Log information should include weather, time of day, water and air temperature, water clarity, date, location, salinity, lure choices and retrieval methods and major/minor feeding periods. Logs can assist in pointing us in the right direction especially for those who don't have the opportunity to fish very often. Done properly, it provides historical data that can be used to duplicate success. Not every log entry will document a successful fishing trip, but sometimes more can be learned from an empty stringer. In reviewing information recorded on a slow trip, adjustments should be made to increase the odds on the next outing. Logs help us monitor trout movements within a bay system and illustrate behavioral patterns based upon seasonal changes and other variables.

It is important to understand how certain elements affect trout activity. My log entry for November 6, 2014 shows that we caught good numbers of trout on limetreuse Salt Water Assassins in a certain area when the water temperature was 72 and the salinity was 18 ppt. During the same time frame a year later the salinity may be 10 ppt and the water could be 10 cooler. Using what I know about trout movements based upon salinity and water temperature I would say that enough has changed to prompt a look in another area. In addition, I may want to throw slow sinking plugs instead of soft plastics because of the cooler water temperature. Maybe the water clarity is poor because of freshwater run-off so darker colors may deserve a shot. On the contrary, if conditions are similar then try to emulate the strategy used last time. Always remember that seasonal trout movements are somewhat predictable every year. However, if one or more of the variables change then trout behavioral patterns and/or migrations will react to such deviations. The most eccentric variable that I've observed in recent years is water temperature. In 2014 it seemed as if we went from summer to winter with the early arrival of cold fronts. This was responsible for trout showing up in some of their winter haunts about a month early. Remember, trout don't have calendars. They respond to their surroundings including water temperature, salinity and available forage.

Too many anglers, especially those who are new to the sport, could open a sporting goods store with all of the latest and greatest lures they've purchased. Don't misunderstand, there are some new baits on the market that are intriguing and worth a look such as Live Target's shrimp as well as their Bait Ball Series, but I'm a firm believer in sticking to what has been working. Three different colors of soft plastics (Limetreuse, Red Shad and Chicken-On-A-Chain) are really all that's needed in our bay system. The brighter colored Limetreuse works great in green water with adequate sunlight. Red Shad is always reliable in stained or muddy water while Chicken-On-A-Chain is perfect for those in-between days when the water clarity is a cloudy green. My favorite choice is Salt Water Assassin, but there are many soft plastics out there that will get it done. It's a matter of personal preference. Pack a few 1/16, 1/8 and 1/4 ounce jig heads and you're ready to roll. Three topwaters Super Spook Jr., Rapala Skitterwalk and a MirrOlure She Dog is really all that's needed most of the time. Spook Jr's are great for calm conditions. Throw a Skitterwalk when there's a slight surface chop and a She Dog in breezy conditions and a loud high-pitched rattle is needed. Three slow-sinking plugs can round out your arsenal MirrOlure's Paul Brown Originals.

I can't tell you how many times I've had a client or an entire group show up at the dock in the morning half-awake with bloodshot eyes. Regardless of skill level, tying one on the night before a fishing trip is not a good plan. Your day on the water will most likely be a miserable one and filled with missed bites and backlashes. Those who are truly focused on having a productive trip will be well-rested and ready to roll on game day. To take it a step further, maintaining overall good health through exercise and a healthy diet will enable you to endure long wades when needed and keep you mentally focused.

By doing a little homework and using fishing intelligence, the odds will be in your favor most of the time. Whether you are a rockstar angler with God-given natural angling skills or a rookie fisherman logging experience on the water, always having a solid plan of attack is paramount. And, just like some of the NFL's top quarterbacks, don't be afraid to deviate from your game plan when conditions change. Go through your progressions and know your options. Most importantly, show up ready to play!