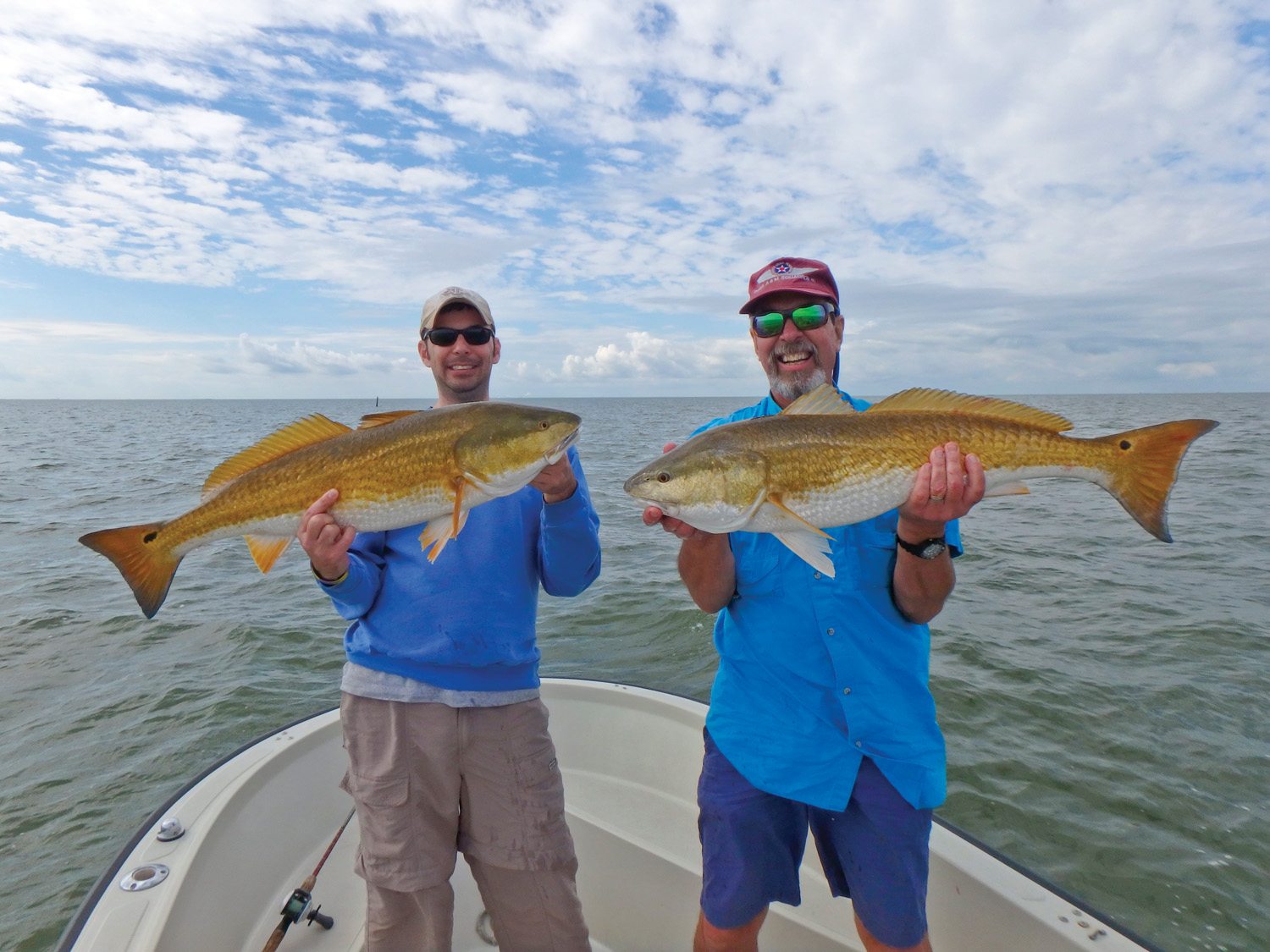 Brian Castille and his dad, Gerry, caught trout then spent over an hour doubling up on reds! Great times with long-time clients / friends!

As I sit in my deer blind here in South Texas, I can’t help but reflect upon all the events of 2017 and how quickly the year seems to have passed. I’m watching two young bucks sparring playfully as I listen to coyotes howling in the distance on this calm evening. I must say, I feel like I’m in Heaven, but my mind drifts elsewhere. 2017 has been a rollercoaster ride but my little South Texas respite these past few days is allowing me to finally kick back and exhale for what seems a very long time.

I’m the kind of guy who thinks about things in minute detail and then has a bad (or good) habit of overanalyzing. I remember just about everything, then try to figure out why things played out the way they did. I go a step further in my thought process to determine if there was anything I could or should have done to affect the outcomes. The hurricane-induced changes up and down the coast were completely out of our control. The effects on our fishery were good for some and maybe not so good for others. There was nothing any of us could do to change the result. However, we should all come away wiser for the experience.

The year began with another mild winter. Fishing started out rather average across the Galveston Bay Complex, so I found myself fishing the Matagorda area for the better part of three months until I was satisfied with the quality of fish here at home. My trips to Matagorda were all productive – sans that little Corky-in-the-ear incident. Here’s a little sound advice – Always remember to wrap your line around the guides on your rod when traveling across the bay. Generally speaking, nothing good can be expected when a lure flies off of the hook-keeper while doing 40. Wrapping the line also helps protect your rod from swivels or jig heads nicking your rod blank in the wind. It also helps keep all your rods from sticking together like Velcro when you unload them from your truck.

April on Galveston Bay was by far my best big trout month of the year with several over 7-pounds and one very close to the 8-pound mark. Our run of big trout seemed short-lived however. Catching numbers of trout was not necessarily a problem but we caught them in fewer areas than in years past and they were much smaller than usual. My concerns, along with many others, prompted me to get further entrenched in advocating a reduction in the daily bag limit to five trout for Galveston Bay. This involved extensive dialogue with the Coastal Fisheries Division of Texas Parks and Wildlife Department, as well as segments on Captain Mickey Eastman’s 610 AM Outdoor Show, and CCA Advocacy Director Shane Bonnot’s podcasts. Hopefully, we will see some positive changes leading up to September 1, 2018 that will greatly benefit our Upper Coast trout fishery.

We were on a solid pattern in a few locales right up until the record floods from Harvey. Fishing then played second fiddle to helping friends and relatives whose lives had been turned upside down. This was a depressing time for me, witnessing the hardships of others, but it was also a prideful period seeing everyone standing steadfast together and lending a helping hand. I would occasionally take a break from tearing out soggy sheetrock and venture out to find fishable waters, all the while wondering when I could get back to work. What we witnessed in the first couple of weeks had quite a few of us worried about the future of our Upper Coast fishery. Our salinity levels eventually increased to suitable levels and fishing was good again. It took me awhile to mentally rebound from all that happened but things eventually fell back into place.

Fall fishing was pretty good with increased numbers of keeper trout showing with every cool front.Some larger trout up to 6-pounds started to show at the time of this article and we seemed to be headed toward a productive winter season. Some live oysters were spared, much to our surprise, albeit in mainly 9- to 10-foot depths where salinities remained more suitable during the floods. West Galveston Bay was spared enough habitat in the form of shoal grass and oysters because of its closer proximity to the Gulf. Things are not as bad as they could have been, but they could certainly be better.

I’ve been fortunate to fish with many of the same clients year after year. As a result, many friendships have evolved. I take pride in teaching them the patterns and strategies over a twelve month period to enable them to get the most out of their fishing experience. These friendships now run even deeper because many of them have children that they’ve begun to introduce to fishing. Despite all the men and women that have fished with me, watching these youngsters grow up before my eyes and seeing what they’ve learned gives me more satisfaction than anything. This has been the highlight of my year without a doubt.

As a professional fishing guide, I witness kids of all ages with varying degrees of angling skills. Most have learned just enough from their dad to make them dangerous, while others are a little green because of the cyber generation in which they were born. Many of them have not been exposed to the outdoors until now as young teenagers. It’s not necessarily their fault and kudos to mom and dad trying to get them involved but, for Pete’s sake, make them put their cell phone in the leaning post storage compartment!

Here’s a little news flash for you kiddos - Siri can’t help you out here on the bay. However, all hope is not lost. Whether they were raised on BB guns or video games, developing a solid skill set can still be achieved through practice and good listening. I witness it every year and I have some kids who really aren’t “kids” anymore who can fish circles around most adults. They’ve discovered a whole new world and I’ve been blessed to play a role.

So 2018 finds us embarking on another new and hopefully prosperous year. We’ve weathered the hard times to get to the good times. While it’s true that changes have taken place that are out of our control, as conscientious stewards, we should become wiser as we witness all such changes, good and bad. We need to do everything in our power to assure “good times” for all who follow in our footsteps. It’s not just about us.

and wisdom to know the difference. Living one day at a time; enjoying one moment at a time; accepting hardships as the pathway to peace; taking, as He did, this sinful world as it is, not as I would have it;

trusting that He will make all things right if I surrender to His will; that I may be reasonably happy in this life and supremely happy with Him forever in the next. Amen.”- Reinhold Niebuhr (1892-1971)