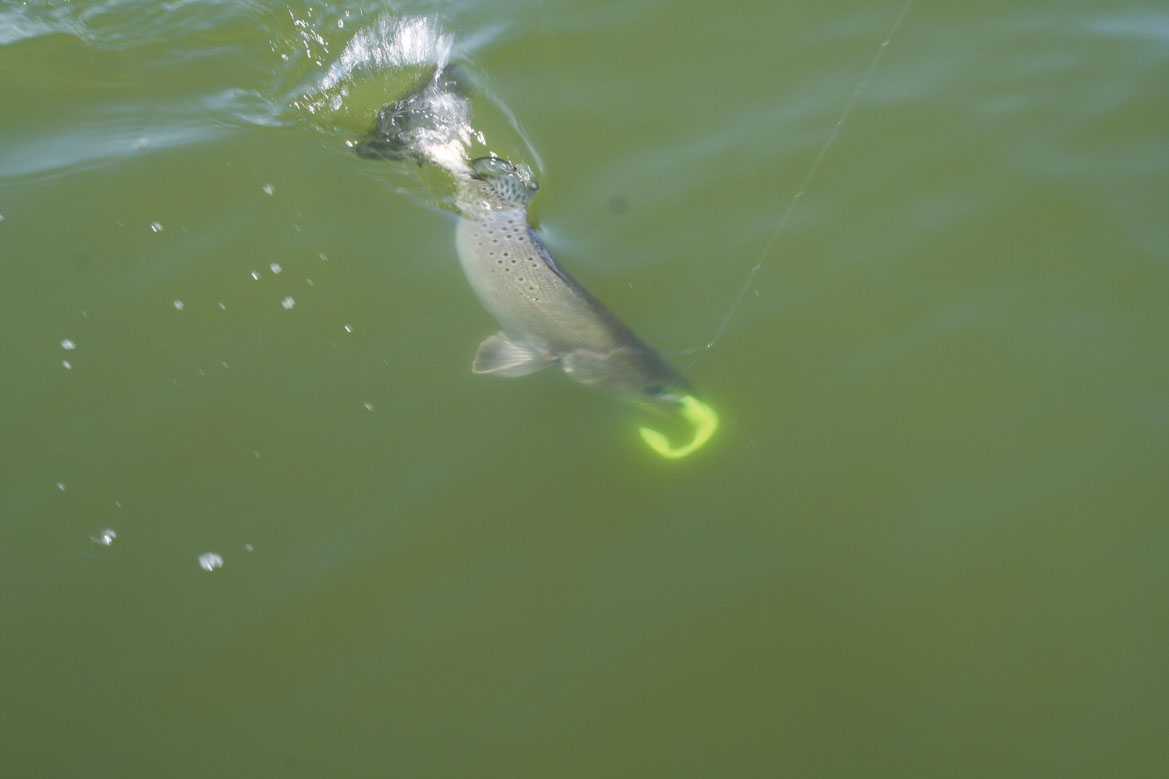 Just because you’re fishing in deep water doesn’t necessarily mean the trout are deep. This trout along with many others were caught by flat-lining paddle-tail style worms just below the surface in 8 feet of water.

Several small slicks emerged along a portion of reef that dropped off from 3.5 to almost 7-feet as we troll-motored to our first stop of the morning. I felt like a duck hunting guide as we maneuvered into position, "Alright guys, Take 'em! Oh, I mean cast!" Having caught nice trout the day before on this reef with identical conditions I felt confident that success would be duplicated with this group, especially considering their skill levels. Like ducks cupping their wings as they unsuspectingly drop into the decoys, the trout were generous enough to provide slicks that signaled their location. This was going to be too easy, I thought.

With pinpoint accuracy, all of the guys landed their jigs in exactly the right location in relation to the slicks, based on the wind and current. I knew we had the right choice in soft plastics and it wasn't our first rodeo, so how did we not get a bite? Could it be that on this particular morning everyone in my boat including me had the funk?

I always say, "It's the Indian, not the arrow." Well, the Indians on my boat had been catching fish using the same basic retrieve for years and they were damn good at it. I'd seen them catch many trout and reds while employing their tried and true techniques. I was learning that "tried" may not always be so "true."

Scratching my head, I made a long cast off of the stern then noticed another set of slicks popping about 30 yards off the bow. Before reeling in, I trolled in the direction of the slicks with my worm dragging behind the boat. Bam! "This is a good fish."

The healthy five pounder couldn't quite resist a trolling jig. Hmm. "Hey guys, just cast out and rip your worm straight in.Just flat-line it." It turned out that all of those years of experience jigging, jerking and wiggling soft plastics had been dumbed down to a simple cast and reel technique. Many nice trout were duped that day using a method that required zero finesse. A different angle and the fleeing silhouette of our worms evidently triggered a sense of urgency that a classic lift and fall retrieve had failed to produce.

We've come a long way from the days when Nick and Cosma Creme of Akron, Ohio, melted plastic on their kitchen stove and poured it into molds to create the first soft-plastic worm (the Creme Wiggle Worm) in the 1940s. As with many lures we use today, bass fishing was the birthplace of soft plastics.

Enter the saltwater realm. Pat Kelley poured plastic in his Pearland, Texas garage in the late 1960s launching the Kelley Wiggler shrimptail (aka "tout tail") that legions of Texas anglers cut their soft-plastic teeth on. Mister Twister rolled out the Curley Tail grub in 1972. Bass Assassin became a force in the saltwater market during the late 80s and legendary lure maker, MirrOlure, rolled out their line of soft plastics within the last decade. And yes, there are many more that I haven't mentioned, but let's not kill more trees than we have to.

Shrimptail body styles eventually morphed into eels and shad bodies. Over time, advancements in technology and materials resulted in more lifelike appearances and durability. Paddle tails, curly tails, rat tails, split tails, both short and long; there's a soft plastic for everyone and every application. Every color, style, shape and size imaginable is available on the pegs of every sporting goods outlet. There are scent-impregnated soft plastics, some with rattles inserted, and even worms with tentacles and legs. Take your pick. Is your head spinning yet? Should we even discuss the vast array of colors available or the imaginative names they have?

As we get into the warmer months of the year, soft plastics will become our primary choice of baits on most days, for several reasons. A worm, jig, tail, tout tail or whatever nickname you prefer enables you to cover more water in less time compared to other baits. Drifting open-water reefs and slicks in bays such as Galveston requires rapid-fire and accurate casts as trout are often on the move in pursuit of open-water schools of bait. A perfect example was a recent trip when we followed a school for over 300 yards while catching trout the entire time. More boat fishing is done on this part of the Texas coast compared to our friends to the south and a good trolling motor is a must-have. Chunking worms is the perfect approach for this summertime run-and-gun style of fishing. Moreover, soft plastics are the most effective and versatile bait in the artificial category. "Soft plastics are the most effective artificial bait when targeting sport fish in Texas and second overall. Live shrimp is number one." (Art Morris, Texas Parks and Wildlife Outreach Specialist Corpus Christi Field Station). Tails can be modified to suit the application by changing jighead sizes, rigging weedless, rigged under a rattle cork, dipping the tail, etc. No other artificial lure is as versatile as a soft plastic.

Get Into the Zone, Then Figure it Out -

Survey the bottom landscape, water depth, water clarity, wind and current when choosing the right soft plastic to fit the application. Wading a shallow flat laden with grass and potholes will require a different approach than drifting a deep oyster reef. A 5-inch rat tail rigged on a 1/16 ounce jig head is fine while wading in knee to waist deep water and the grass isn't suspended. A worm rigged on a weedless H&H Flutter jig would be more suitable when there's floating and suspended grass. A textbook pop-pop-fall motion while casting cross-wind may get the job done. If not, then a slow sweeping up-and-down retrieve with a 4-inch paddle-tail plastic may work. There is no right or wrong retrieval method. Also, some soft plastics are more buoyant than others so paying attention to the sink rate will help when choosing jig head sizes. I seldom use anything heavier than a 1/16 ounce when wading.

On the opposite end of the spectrum we'll find ourselves drifting over shell in 7 feet of water with a moderate wind and current. In this situation an 1/8 ounce lead head would most likely be employed. Again, we always make an effort to cast cross-wind and cross-current. This will enable us to present the worm in a more natural fashion as all fish face into the current. We'll start by letting the worm sink to the bottom then use a vertical lift-pop-pop-fall routine. This allows our lure to find where the trout are holding in the water column. When the trout seem to be in more of a negative or slow feeding pattern the East Bay Jiggle may have to be employed. The East Bay Jiggle isn't a dance that I start performing after spending too many sleep-deprived days in the hot sun. It's a name coined by one of my clients for a strange looking retrieve that I sometimes use. It works best using a soft-tipped rod like Waterloo's HP Lite. The East Bay Jiggle involves a straight retrieve with varying speeds and a compact erratic whip of the rod tip about every 4 or 5 turns of the reel handle. This is done while keeping the rod tip pointed toward the lure. After 3 to 5 quick whips the worm will settle. This is usually when the strike occurs. If not, then begin the straight retrieve again followed by the whipping action. The reel handle should not be turned during the whipping process. Vertical jigging is not usually used with this method. I have tricked many finicky trout using it and while I'm not crazy about its name, at least it's not called the Chicken Jiggle or the Chicken Finger.

Soft plastics should be a staple in virtually every tackle box year-round but especially during the summer months. Remember, there are no rules when working a worm. By experimenting to find the proper presentation you will gain more and more confidence over time. Whether you're trolling, dead-sticking, worm burning or dangling it under a rattle cork, this is the time of year for soft plastics. Try different retrieves until you find what works in a specific situation. When you do, you can give it a funny name and call it your own.