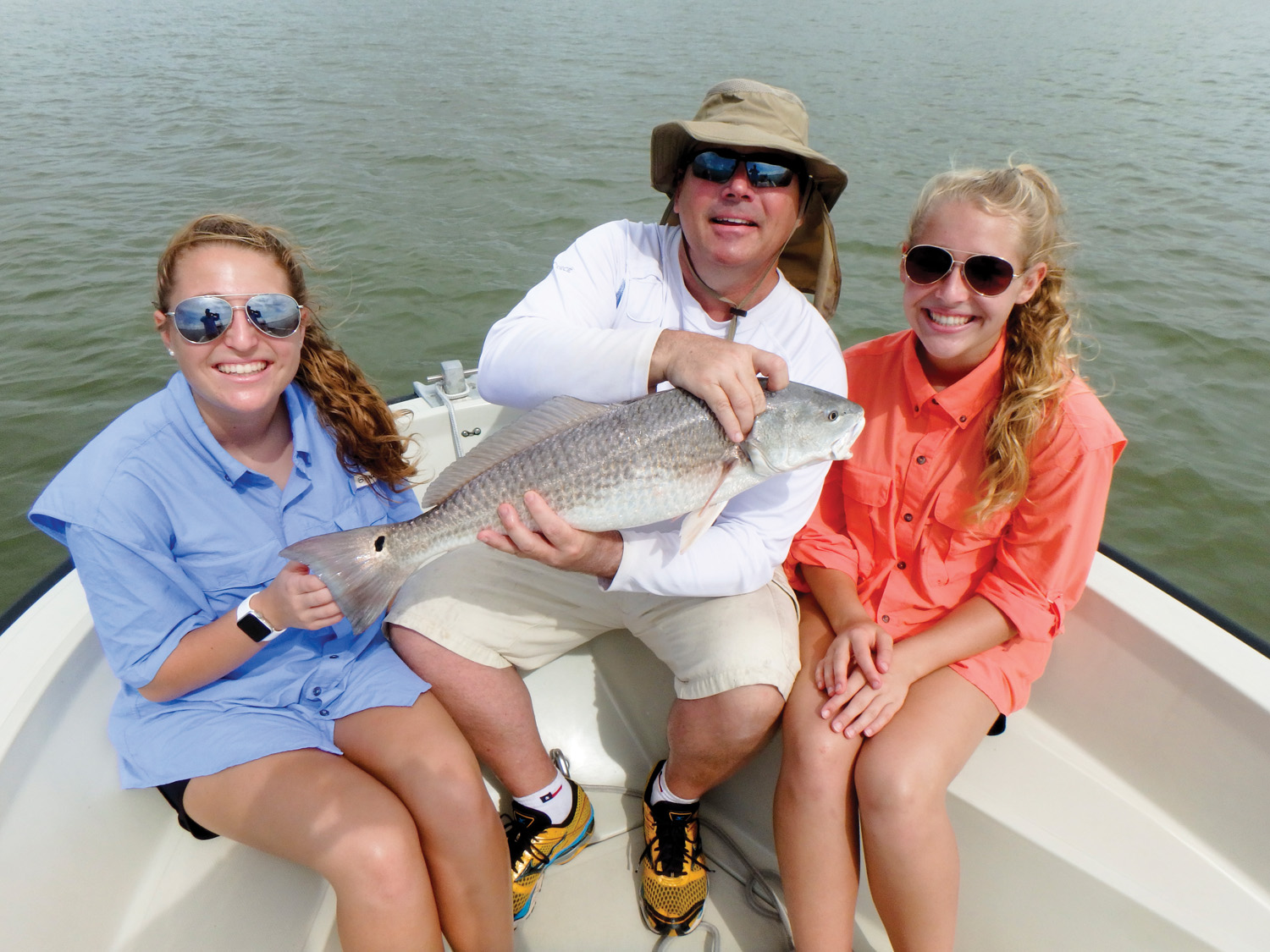 Elyse and Jillian Simmons had a great time catching shallow water reds with their dad, Jay.  This one was just over 27 inches and 8.5 pounds!

Historically, August is one of the hottest months of the year and supposedly most of the trout here on our part of the coast can be found in some of the deepest water available.After all, it sure makes sense because water temperatures are cooler down deep and dissolved oxygen levels are often higher beneath as well.I promise you that 99% of the articles, DVD’s and fishing shows out there will preach this.While mostly true, there are exceptions.

The exceptions I will discuss are specific to the Upper Texas Coast as such occasions here would not be considered an anomaly in other regions such as the Lower Texas Coast.Areas such as the Lower Laguna Madre for example have trout populations that have adapted to higher salinities and water temperatures and therefore possess different behavioral patterns than trout in our region.It has been documented that different subpopulations exist along different parts of the Texas Coast.These subpopulations are often referred to as clines.A cline simply describes a population within a species which is adapted to specific environmental conditions or form of species that exhibit gradual phenotypic and/or genetic differences over a geographic area.In other words, trout (in this case) have adapted to salinities, water temperatures, habitat and food supplies for the area they inhabit.Subsequently, their behavior, growth rates, spawning patterns, etc. correspond to the elements in which they live.As an aside, this could be one of the reasons there are more 30-plus inch trout caught in bays and estuaries south of Galveston Bay.We can save that discussion for another day I reckon.

Back on July 31, 2011 a really nice family came in from Omaha, Nebraska for a little half day trip with their son.It was one of those mornings where you could tell by the thick hot pre-dawn air that it was going to be a scorcher by mid-morning.My well-thought-out master plan had us catching trout along deep spoil reefs as the sun pierced the horizon then hitting a few redfish areas.Catching a few trout then chasing open water schools of reds to stay cooled off is a strategy that has worked for me many times.Well, not on this day.I hit every hump, well pad and patch of shell I knew in 8 to 11 feet of water with only a couple of keeper trout and some STAR Tournament quality gafftop to show for it.Around 10 O’clock I decided to tour the mid-bay reefs while looking for signs of life.

Without a breath of wind, it was impossible to see slicks and we couldn’t cover water drifting because the tide was dead.After running about 25 miles I had no other choice than to turn around and head back towards the ship channel while praying the entire time that our deepwater fish would be ready to cooperate when we got there.

Instead of running across the middle of the bay I decided to hug the shoreline, hoping to run across a school of shallow water redfish on the way.I needed to get them on some kind of action before the end of their half-day trip and things weren’t looking all that good at this point.

Call it divine intervention or just blind luck but there was a group of terns tight to the shoreline feasting on shrimp that were getting blasted in about a foot of water.I killed the big motor and proceeded to troll towards them until I ran out of water while still more than 30 yards out of casting distance.We had two choices at this point; we could sit there and watch the frenzy or I could get out and push the boat towards the school.The bottom was firm and I only lost my flip flop a couple of times, but before long the entire family was catching really nice trout in inches of water in the middle of one of the hottest days of the year.Once that school played out we did the same thing down the shoreline but this time they were redfish.It was very rare to see those fish that shallow in those conditions.They obviously followed the shrimp and there was deeper water nearby in which they could return once the frenzy ended.

On a more recent trip I experienced another unusual occurrence.We had been catching plenty of trout on mid-bay reefs and channel spoils but the boat traffic was such that my nerves simply could no longer handle the chaos.I took Adam and Charlie to a small shallow cove just so we could have room to fish without dealing with the traffic.There we caught nice trout in less than two feet of water over mud and shell on soft plastics and waking baits.One would expect favorable results in an area like that during the winter months but not necessarily in the heat of the summer.This time I think the trout were up shallow because of hordes of small shad.Just when you think you know a little about trout patterns and behaviors they show you that you don’t.

It has always been discussed that larger trout seem to have a lone-type behavior and I truly believe this to be the case for several reasons.We have a large number of sharks in our bays especially during the warmer months.Trout frequenting skinny areas would seem to stay out of harm’s way while maintaining their apex predator status.In addition, commotion caused primarily from heavy boat traffic out deep would seem to push a fair number of specks toward the shorelines.My observations indicate that there is almost always deep water nearby for the trout to seek refuge when circumstances allow.In most cases, deeper cooler water is within 200 yards of where we find these fish.There doesn’t have to necessarily be a buffet waiting for them on an adjacent shallow flat either.A few mullet or a couple of pods of shad are more than enough for them to ascend to the shallows even if it’s for a short period of time.

Over the years I have witnessed a change in the patterns of spotted seatrout here in Galveston Bay.I’m not sure if the changes are a result of warmer winters, fishing pressure or diminishing habitat.It could be a result of all of the above.I also believe that our trout are slowly adapting to environmental changes and it’s changing their behavior.There’s no doubt that things are different than they were even 10 years ago.We catch fish in areas that we shouldn’t and don’t catch them in areas that we should.Whether it’s an isolated group of trout on a stretch of barren shoreline or a school out in 10 feet of water, there seems to be a more random element in our daily experiences.

We always preach seasonal patterns when it comes to targeting trout and reds.We should definitely stick to those core textbook strategies when hunting our targeted species.However, we should probably slow down a little on the way to those deepwater areas where we’re supposed to find trout and check out what may be happening on the shorelines.You know – the skinny stuff – where the trout aren’t supposed to be.