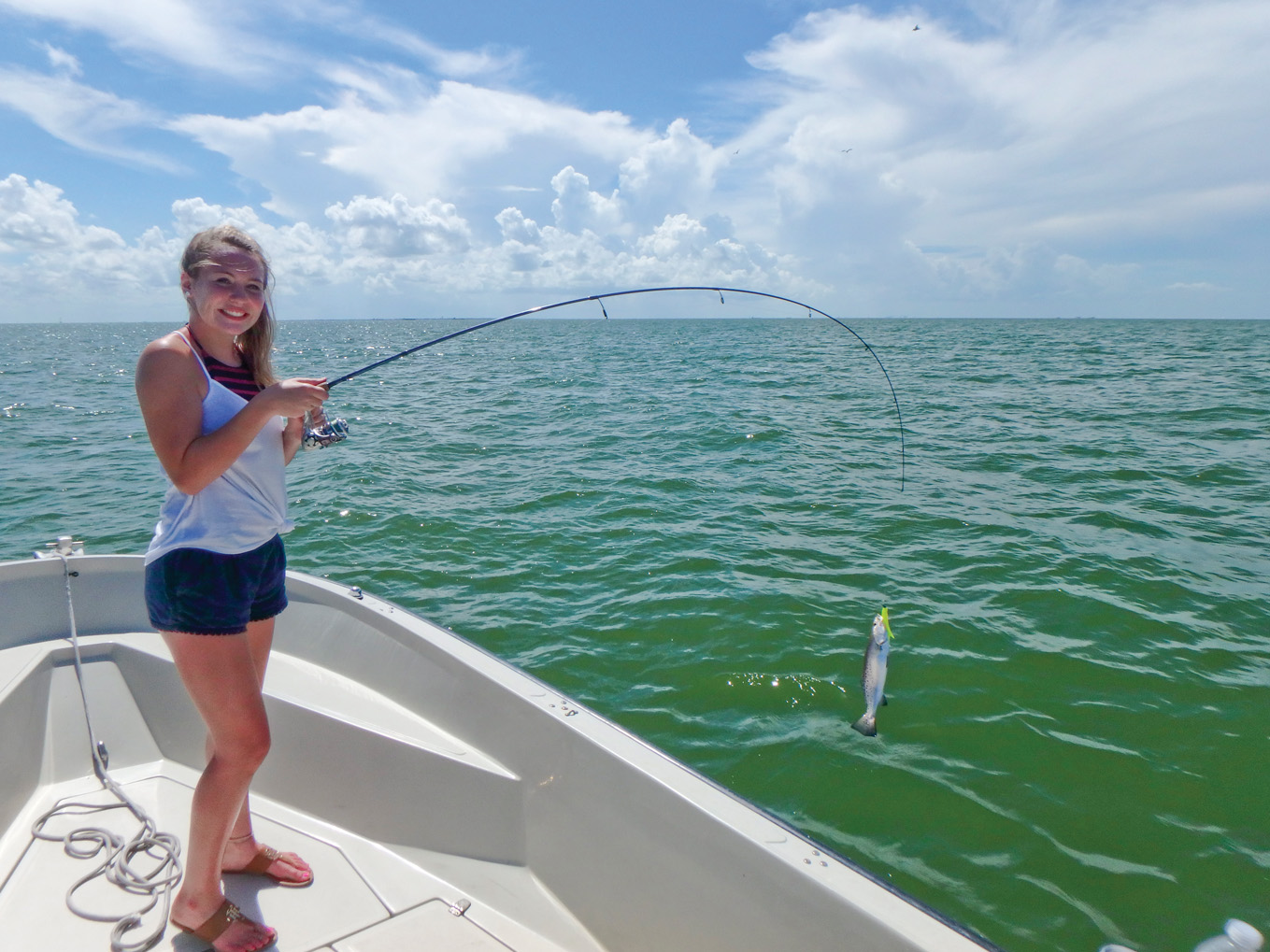 I used to cringe when I looked at the tide predictions and it showed two inches of movement all day. Water movement causes forage species to become more active and usually the predators we target with spots, specks and both eyes on one side will commence feeding. Regular clients who have been with me a long time have it figured out. They do their research and call well in advance to hopefully get the best days. The open days on my calendar are mostly weaker tide days and are the last to fill but someone has to end up taking them. It would be nice if every day had great tidal movement but the bottom line is that we go every day that ends in Y.

Many fishermen still believe that four tide days are best, and this is potentially true if each swing provides a four- to six-inch change in water level. Too often though, it’s only one or two, and we’re faced with a challenge. Trout and other target species tend to become inactive during these periods and getting bites on lures can be like pulling teeth. Because folks like me who take folks like you fishing for a living, we cannot pick our days, so we have to find a way to make something happen. Believe it or not, sometimes we can actually make things happen. It requires some patience but like Captain Ernest Cisneros says, “We have to be more stubborn than the fish.”

On Galveston Bay this time of year, I like to spend more time near the ship channel where substantial amounts of water are displaced by ship traffic. We will generally get the occasional bite as we wait for passing tankers, container ships, etc. However, the artificial ebb and flow of one passing through can give us a flurry of action that otherwise would not be experienced farther away in the bay. Not only will water movement spur temporary activity but, often times, muddy streaks will be created which serve as ambush points for trout. As a side note, one must be careful not to drift or anchor too shallow along channel spoils when employing this strategy. Some of the breakers along shallow spoils can capsize small boats. It happens every year. For this reason, I like to stay on deeper structure in say 9- to 11-feet of water.

There are many great areas along the Intracoastal with sudden depth changes, shell and shoal grass, depending upon which part of the bay you’re fishing. Most of these areas are better suited for wade fishing as opposed to drifting because of their close proximity to shorelines and shallow spoil islands.Barge traffic is the ticket here. I remember a trip several years ago while wading with two clients on a slack tide near Siever’s Cut in East Galveston Bay. Every time a tug pushing a barge rolled through it would send the trout into a mini-frenzy, waking them up enough for us to trick some really solid fish.

Normally, I would say that wind is not our friend here on the Upper Texas Coast, but sometimes wind can move enough water and stir bait when nothing else can. The Lower Texas Coast, where tide currents can be almost non-existent, some amount of wind-generated current is necessary for success and they seem to get plenty of it. Up here, we can handle a little but not a lot. Too much turns our bay into liquid mud.Prior to Hurricane Ike, we had more areas of hard substrate, mainly in the form of live oyster reefs, and we could handle stiffer winds. On days with subtle tidal current, an 8-to 12-mph breeze can make a huge difference. Not only does it contribute to the minimal tidal flow, it enables us to see slicks and cover more water when drifting. Sometimes the surface resembles a giant mirror. As awesome as this might look, it doesn’t bode well for catching.

On days when there is no wind or current, we go to reefs or structure that have been holding fish and use loud topwaters such as MirrOlure’s She Dog to entice agitation strikes. Often times we’ll get more blow-ups than hook-ups but it can spur somewhat of a feed if you’re persistent. Trout remind me so much of dogs. We have three of them. On hot days they lie on the back patio near the pool just chilling.They’ve already eaten but if I throw a Milk Bone on the patio they’ll fight over it. Trout seem to exhibit similar behavior. A She Dog may wake them up and trigger competitive activity, following which a soft plastic or waking bait like a Strike Pro Hunchback can strike pay dirt. It is possible to make the trout eat sometimes!

A very effective tactic I use often is venturing to shallow water shorelines or back lakes where depths average 1.5- to 3.5-feet. By narrowing the strike zone our odds increase for drawing strikes. Fishing a wide-open reef in 8-feet of water leaves a lot to chance but in shallow water our lures are immediately in the strike zone the instant they hit the surface. This “in your face” tactic has bailed me out many times on tough slack tide days.

This one may sound a little strange but, trust me, it works! I actually used this trick on today’s trip.There was no tide or wind and very little surface activity. I had three clients drifting in about 7-feet of water. I knew the fish were there because of recent results, not to mention I could smell slicks that I could not see (too calm). I would troll about 20-yards and stop, and we would hook up with pretty good trout. Five or ten casts later the bites would cease. I would then troll slowly back through the area and the bites would come again. The movement of the boat and the stirring from the trolling motor gave us something we could work with in what most folks would consider dead water. It really works!

For whatever reason through the years, I’ve determined that redfish don’t seem quite as smart as speckled trout. Maybe this is why they don’t seem to garner the respect I think they deserve. I’ve fished for them as far up the East Coast as South Carolina and as far south as Port Isabel. I’ve heard them called every name in the book. Spot-tailed bass (Carolinas), rubber lips (Ken Griffith), saltwater armadillos (Randall Groves), grass donkeys, channel donkeys, etc. When conditions take a turn for the worse and trout won’t cooperate, channel bass seem to bail us out. When you’ve tried everything but C-4 to catch trout and the reality of heading home with a skunk is looming, hitting a back lake armed with paddle-tailed soft plastics, spoons, waking baits and topwaters will sometimes save your day. Mud boils, slicks, wakes and hovering gulls can be the signs that lead you to the gold.

Each month usually has about 15 days of tide movement conducive to great results. The other half can be spent playing golf or, you can get out here with those of us who have to try to make things happen, even when they’re not supposed to. At the end of the day it’s just fishing. If you catch ‘em, you catch ‘em. If you don’t, you try harder next time. But, by all means, never think you’re dead in the water just because it’s a slack tide day.