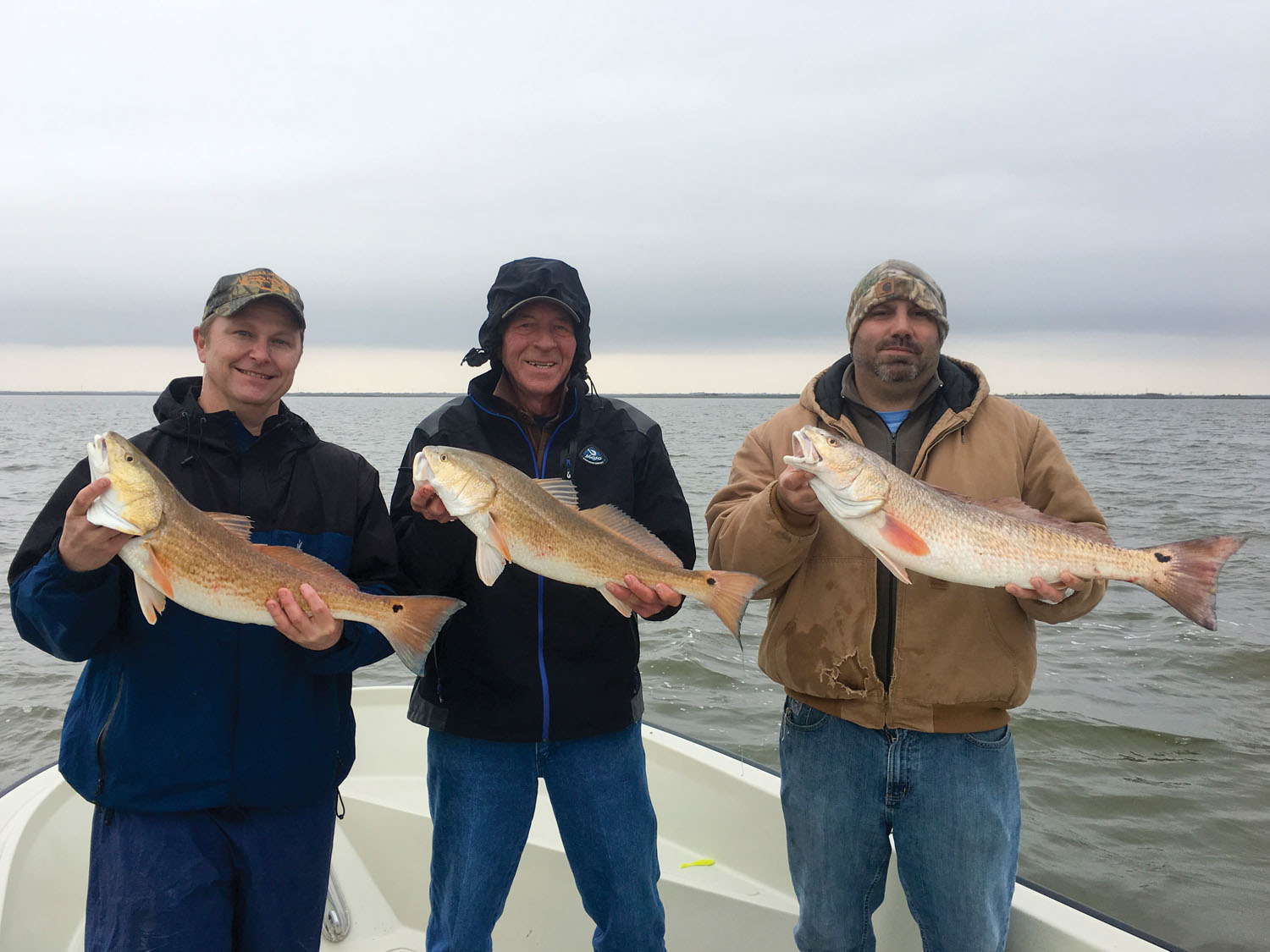 The minor feed just happened to coincide with a tide change providing us with nonstop redfish and trout action for a solid hour!

A recent trip with two very good fishermen found us grinding into early afternoon for just a few fish. The wind was very light out of the southeast and the water was “trout green” as some folks prefer to call it. Except for sometimes fishing deeper areas, I generally search for somewhat stained or streaky water this time of year. Such water coloration could be caused by wind, current or freshwater runoff, to name a few. Unfortunately, tide movement was almost nil that day, so finding streaky water was next to impossible.

As we waded from one spot to the next we witnessed very few mullet flipping and every pelican in sight was either sitting on the water or resting atop exposed reefs. The entire bay had no pulse. Our bites were infrequent and very noncommittal. We basically covered one end of the bay to the other while jumping out at almost every spot where I’d had success just a couple of days before under similar conditions.

I told Bill and Kent that if we continued to ride around searching for signs we couldn’t find, we might as well have left our rods at home. We finally arrived at what would be our final stop of the day. It was almost 4:00 PM when we eased into the knee-deep water near the mouth of a large cove. Frustrated but determined, all three of us went different directions armed with Corkys, MirrOdines and topwaters.

Roughly 30 minutes into our wade and, for the first time all day, a few mullet began jumping. A few turned into dozens, especially along the waist-deep ledge where the bottom transitioned from sand to soft mud. Bill struck first and then Kent hooked up. A large flock of white pelicans flew overhead while scattered terns and gulls picked and pecked along the surface. The bite lasted maybe 45 minutes before gradually fading away. We didn’t set the world on fire but that final stop made the trip more than worth it.

For all who scoff at the notion that solunar activity impacts feeding patterns, I would say wake up and smell the trout slicks!

The solunar table predicted a major feeding period to occur between 3:58 and 5:58 PM.Most of our fish were caught between 4:30 and 5:15 PM. And wouldn’t you know it, the handful we caught earlier came during a solunar minor between 9:17 and 10:47 AM.Hmmm...there just may be something to this solunar stuff after all.

John Alden Knight was an avid hunter and fisherman from Pennsylvania who in 1926 went bass fishing with a guide on a Florida lake. Knight was impressed with the guide’s ability to put him in the right place at the right time to produce unbelievable results. The guide explained the importance of moon and sun positioning and their effects on feeding behavior. Knight bought into what was then considered folklore and over the next ten years logged his own experiences, ultimately concluding that effects from the sun (sol) and moon (lunar) were not a fluke. The other force he noted that heavily influenced fish behavior was tide. These three elements, he said, affect the behavior of fish more than any other factors. He, of course, also noted the influence of local weather conditions. (Knight, John A., “Moon up – Moon down” 1942). Knight developed his first solunar tables in 1936, which ultimately became widely published, and the rest is history.

Nowadays, computer models can render solunar data way far into the future that are available via many media sources, including smartphone apps. Hell, you can even buy a wristwatch that tells you the best times to fish based upon the moon phase and positioning. I can just hear it now... “Honey, I’m going fishing. Oh wait. My watch says it’s gonna suck today.”

Minor feeding periods occur from 1 to 1.5 hours before the moon sets and again 1 to 1.5 hours as the moon rises. Majors occur when the moon is directly overhead or directly beneath our feet. The longer and sometimes more aggressive major feeds generally last 1 to 1.5 hours either side. The strongest activity occurs closer to a full moon or a new moon, and is weakest on quarter moons. This is because the combined gravitational force of the moon and the sun is strongest when both are directly above or directly below us. It’s important to observe the correct data for the latitude and longitude of your area. Most solunar tables provide adjustments to calculate accurate feeding times for the area in which you choose to fish. The solunar table in this magazine is very straightforward and provides tidal corrections.

I must admit I’ve become a keen follower of solunar data especially between January and April, which is when our fish here on the Upper Coast can become very stubborn. These are months when late and infrequent cold fronts constantly create instability rendering a day-to-day game plan for patterning trout almost useless. That said, there are countless other factors that affect the behavior of our fish, especially trout. Weather conditions such as extreme high wind, sudden temperature swings and barometric pressure changes would top the list.

Fishing pressure also deserves a place near the top. There are more boats than I can ever remember fishing the same areas day after day. There’s nothing we can do to change the weather but by using our knowledge of its effects, we can sometimes make proper adjustments. With regards to fishing pressure, I typically avoid it by fishing obscure areas and at odd times. This tactic also lends to paying even closer attention to solunar data than maybe I would when fishing higher percentage (but generally more crowded) areas. By fishing during the late afternoon hours and at night I can avoid boat traffic and the trout seem to be less disrupted and easier to catch. A true legend in Texas fishing, the late Rudy Grigar (aka Plugger), probably caught more trout and reds at night then any man alive or dead.

There are always going to be periods when fish just simply will not eat our offerings. I recall a trip down to our ranch last year when Dad and I finished our work early and decided to head down to the pond to catch a bass or two. This is a small pond and we know exactly how many largemouth are in it because we had it stocked about three years ago, and every one we’ve ever caught was released. After chunking everything from plastic worms to crankbaits for over an hour with no luck, we decided to head back to the ranch house before nightfall. Besides, Dad had a pot of beans on the stove and that man can cook some beans! I also had a cold beer calling my name.

We were fishing the day after a strong front. The temperature had dropped sharply and the barometric pressure was through the roof. In addition, we were fishing between the predicted major and minor, not on either. If there was ever an example of fish not feeding when you knew they were there, this was definitely it. I sometimes get annoyed when a client looks at me and says, “Well, I guess they’re just not here Captain.”I typically just stare back with a look probably resembling Bill Belichick’s face when a reporter asks him a question he doesn’t want to answer and say, “I don’t think they swam off overnight. These fish don’t feed 24/7, you know.”

All of us have had theories from time to time at some point in our lives. If we are adamant about proving our theories, we will log our experiences over time and then formulate a hypothesis. We then either form a conclusion from our hypothesis or determine that our theory requires further research. This now becomes a working hypothesis.

As astute anglers, I feel that we should conduct ongoing working hypotheses because when it comes to fishing, the theories never really end. In other words, just when we think we have it all figured out the fish can make us look like dummies. Therefore, a relentless hands-on approach is necessary to help us understand behavior patterns of the trout we endlessly pursue.

Damn, I’m starving. Must be in the middle of a major. Gotta run. See you next month!