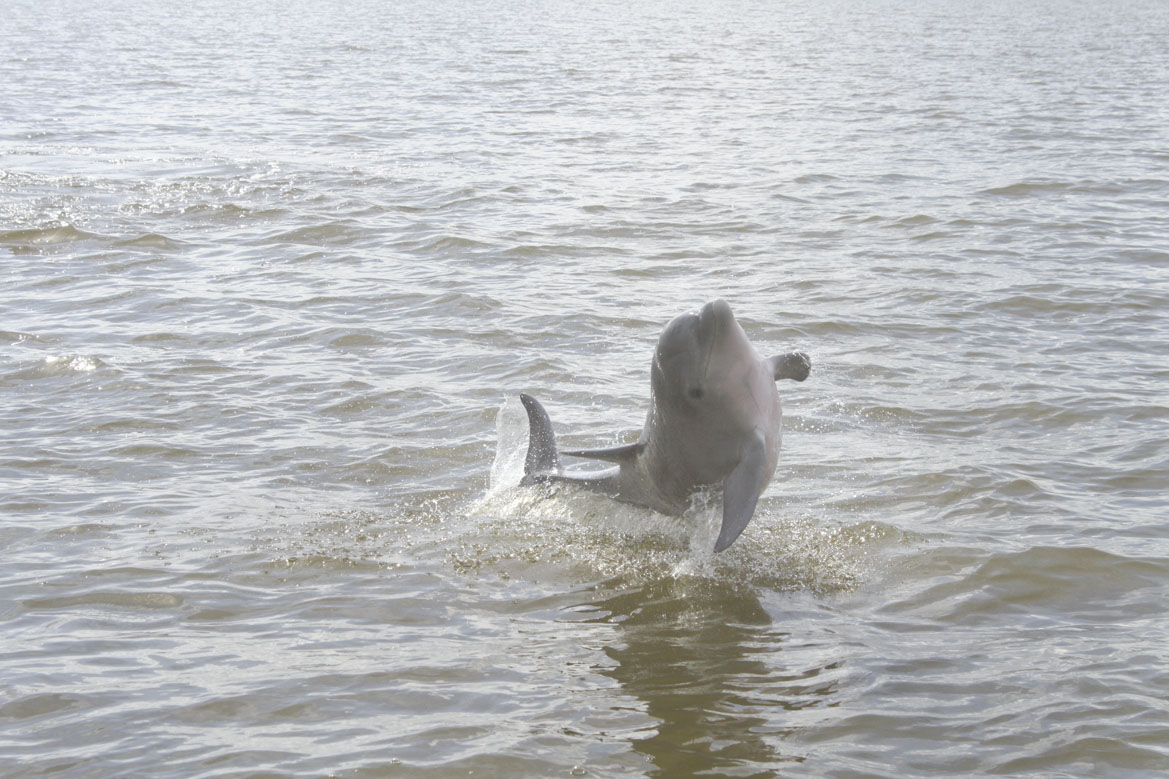 Some days trout just simply will not cooperate but we still had a blast following this school of dolphins for over 45 minutes as they put on a show reminiscent of Sea World.

There was just enough of a ripple on the surface to see trout slicks as the sun peeked over the horizon. It was a late summertime pattern that was about as predictable as the sunrise itself. I may as well of had the Jackson 5 playing on my stereo because catching was going to be as "Easy as 1-2-3." The tide was changing from a high to a low. A waxing eighty-percent moon was sinking out of sight in the west. Everything seemed staged for an epic bite but we could only manage a few dink trout. What in the heck was going on? Should we stay put and wait on the larger trout to feed or should we move on to hopefully greener pastures? Were those larger trout even still there or had they found a new home?

The question of when to stay put or when to move to another locale seems to be the million dollar question that lurks in the minds of fishermen. There are countless variables that should influence your decision to stay or leave. I will attempt to address some that I feel are relevant based upon my own experiences as well as provide a few tips along the way. All of this being said, we also need to understand that there are days when there seems to be no explanation for a trout's unwillingness to cooperate. Those are the days when we just take our lumps and pray for a better day tomorrow.

While fishing is not an exact science there are certain indicators to help decide whether to stay put or continue searching. Most importantly, you need to remain updated on all elements that affect trout feeding patterns and movements. If you understand what's going on around you then you will have the confidence to make the correct move. Hopefully, you did some homework to determine the tide movements for the area you planned to fish. Studying a solunar table also plays an important role. There are days when major and minor feeding periods have an unbelievably profound effect on the trout bite. Having some knowledge of the hydrology, forage species movements and seasonal influences for your area are also imperative. If you didn't take time to study these influences you'll just have to rely on luck. And while we can all use a little luck sometimes, there are things we can do to increase our odds.

You may consider staying put if you see slicks popping, you're in an area that has been producing, and the tide is about to start moving. This is more about the "When" than the "Where" and the fact that you enjoyed success in the area the day before.

You probably should move on if there is decent tide movement, active bait, you're in the middle of a major or minor feeding period, and you're not getting bit. If you've tried everything you know and you still can't make them eat then you're most likely not on fish.

There are exceptions, however. If you really feel like you are on fish then try a few different things before moving on to another location. Sometimes it's as simple as throwing a different color soft plastic or changing the weight of your jig head. There are times when the fish you've been catching near the bottom have repositioned higher in the water column.

We actually witnessed this on a recent trip. I cautioned one of my clients that he was working his jig too fast as we began the morning's first drift. About that time he landed a healthy speck. Needless to say everyone in the boat increased their retrieval rate and caught fish. We had caught our trout the day before near the bottom in almost 10 feet of water by employing a low and slow retrieve in that same location. My guess is that pre-dawn rain showers cooled the surface while also infusing oxygen causing the shad to elevate and subsequently the trout.

It could be that you and your buddies are casting down current instead of across or up-current. All fish face into the current so bringing your lure from behind them is the wrong approach. Next time you hit the water take a look at some of the other boats with 3 or 4 guys in them. More often than not you'll see the guys on the bow and stern catching more fish than the guys in the center of the boat. This is because they're the ones throwing cross-wind or cross-current. The proper approach is to swing the boat around to allow everyone opportunity to cast at the correct angle. This can be done by using your trolling motor and/or drift sock. Anchoring is also an option especially if you're on a good school. Just know which cleat to use based upon the wind and current to keep the boat positioned for cross-current casting. Chunking a high pitched topwater like a MirrOlure She Dog to draw an agitation strike will most often let you know if the fish are there or not. Topwaters can serve as good indicator baits when all else fails. Making the right call is not always an easy thing to do, but understanding what triggers fish to feed will result in more catching and less casting practice.

Sometimes relocating to another area has nothing to do with catching. Here in Galveston Bay we fish quite a few unmarked reefs and other submerged structure not identified on maps and charts. When a spectator slows down to take a closer look it's time to quickly relocate. You can revisit the area at a later time, but you darn sure don't want the wrong person finding out about your secret hole especially in a bay where there aren't many left.

I can't say how many times we've ended up catching fish where we started the morning. It may seem illogical to revisit a spot that didn't produce the first time, but in most cases catching is more timing related than anything else. A perfect example can be illustrated from a recent trip when we were on the back side of a full moon when tides are weak. Our first stop of the morning yielded one gafftop. After casting to slicks for about 15 minutes I knew these trout were not ready to feed yet. After hitting several other areas with no luck I decided to return to our first spot. The slicks were still there, the tide was slowly beginning to creep in and the moon was about an hour from the horizon (minor feed). Like magic, the same school that had turned up their noses at our Tidal Surge Split Tails two hours earlier wouldn't let us reel in without attacking it. We caught trout literally every cast for 30 minutes.

Spend time becoming more familiar with the areas you're fishing. Learn the bottom structure and contours of the flats, reefs, etc. you're frequenting. Figure out which tides and winds are best for those areas. Find the sweet spots "within the spots" and always be observant. Try to rely more on your senses and instincts than waypoints on your GPS. Use high sensitivity rods and reels such as Waterloo's Ultra Mag or HP Lite fitted with a lightweight long-casting reel like 13 Fishing Concept E. You have to be able to feel the bites to know you're on fish.

Know that you can't always catch them the way you want to catch them or when you want to catch them so learn which adjustments to make and when to make them. Gaining confidence through experience and having the ability to actually pull up to an area and visualize what's happening beneath the surface will result in a more advanced level of thinking and smarter choices. Once you've acquired these attributes the decision to stay or leave will process more quickly and become second nature.