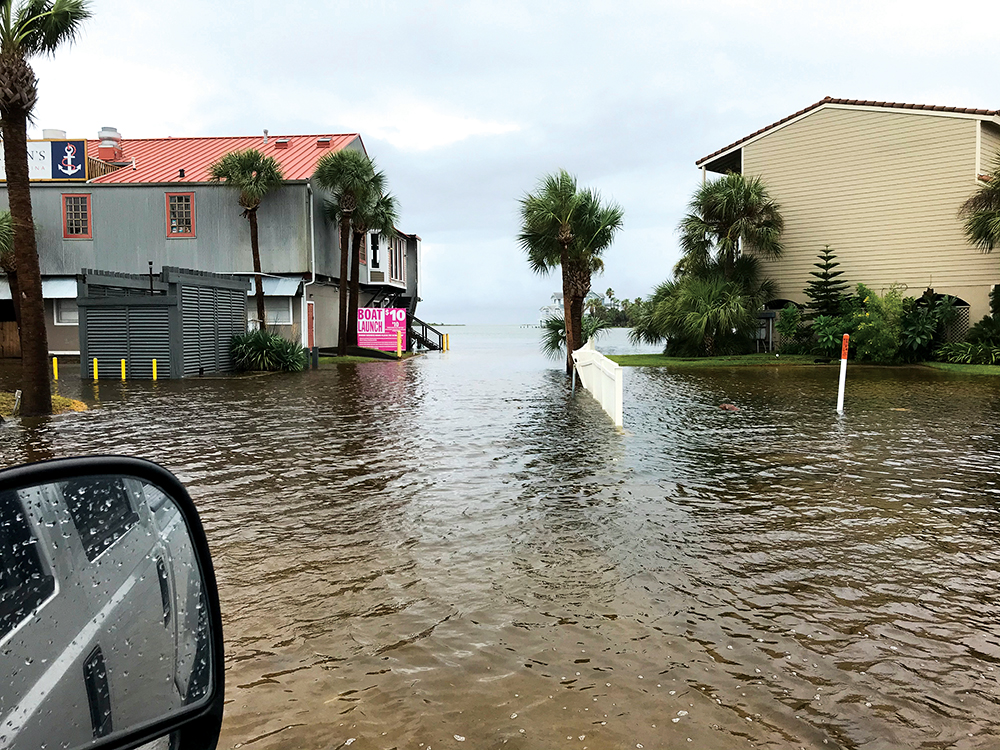 Storm surge from Tropical Storm Beta displaced some fish but also hopefully brought in new ones!

“Man, I can’t wait for Halloween. That’s when the birds really start working in East Bay every year!”  Or, “We’ll start catching trout while drifting color changes over in West Bay around Thanksgiving.”

I hear these same predictions every year. While one sometimes gets lucky and hits the jackpot with such predictions, most of the time other variables such as water temperature, salinity and forage migrations will come together to provide us with more reliable results. To me, picking some arbitrary date on a calendar falls into the same category as breaking open a fortune cookie with hope of finding the winning lottery numbers.

Last year was a prime example of why calendars are only good for holidays and birthdays because our early fall pattern more closely resembled a winter pattern. Unexpected and abnormally strong cold fronts from October 25 through November 13 caused water temperatures to drop into the mid- to high-forties, sending trout into areas we wouldn’t normally fish until December and January.

The November 13 front brought with it nighttime air temperatures of 32° that drastically dropped water temperatures causing our trout to react very quickly by retreating to more insulated areas in and near deeper water.  Once the wind subsided, two days later, we found ourselves drifting a mud-shell ledge that dropped from 4- to 13-feet. The water temperature was 46 degrees and the trout were holding along the ledge (most likely in a thermocline layer) in about 8 feet of water. The water was unusually clear for the area we were fishing due to the cold water temperatures and the sun was bright in the bluebird sky. Therefore, most of our fish were caught on brightly colored soft plastics such as limetreuse Saltwater Assassin Sea Shads and Electric Chicken MirrOlure Marsh Minnows, both rigged on 1/8 ounce jig heads.

For those who are wondering, I didn’t just randomly pick that drop-off because I was feeling lucky. For weeks prior to the harsh cold fronts those trout had been living on a shell flat not far from said ledge. The water temperatures had previously ranged anywhere from 56- to 63°.

When I first located those fish they threw every sign at us you could imagine. There were slicks, nervous mullet, and even white shrimp getting blasted out of the water. The trout and redfish were basically begging for us to come catch them. As water temperatures declined drastically and barometric pressure increased, the closest deep water was where they instinctively relocated. And, subsequently, it’s where we went too!  Interestingly enough, that three week cold period was nothing more than an outlier as the remainder of our winter actually ended up being quite mild.

Fast forward to the same period of time this year. It’s September 22 as I type this article. We’re in the midst of heavy rainfall as a result of Tropical Storm Beta. In addition to what’s occurring within our watershed we have to be concerned about excessive freshwater inflow from the Trinity and San Jacinto Rivers. The Lake Livingston Dam is currently releasing a little more than 4,000 cubic feet per second but I look for that number to increase (hopefully not too much) due to the heavy rains in East Texas. We’ll just have to see.

Fish will also become displaced because of the extreme high tides. Our storm surge during Beta was around 3.5 feet, if not more, when I drove down to Galveston Island today. I actually witnessed birds working in a pasture on the bay side of the Island. It appeared that it was a school of mainly redfish as this particular property backs up to a south shoreline back lake that typically holds quite a few reds. With these changes we’ll have to figure out where to start our search once we can get back on the water. I’m hoping and praying that we’ll get a much needed shot in the arm of new fish from the gulf.

We’ve seen some pretty good fishing in years past after these types of weather episodes. Tropical events that don’t bring catastrophic damage can sometimes rejuvenate a bay system by ushering new life into a system that had otherwise become somewhat stagnant. In the aftermath, the patterns may not initially be what we’re used to experiencing, but by paying attention to the signs and not the calendar, we can capitalize on what Mother Nature gives us.

Getting back to this “paying attention” thing; just because your boat runs 60 mph doesn’t mean you have to go that fast.  I cruise at about 30 or 35 mph most of the time when moving from spot to spot. My head is on a swivel the entire time and I feel like I might miss something by traveling at a higher speed. There are obvious exceptions, like when running from storms, trying to make tournament weigh-ins, etc. We’ve all heard the old saying, “If you blinked then you missed it.” Well, if you slow down a bit then you won’t miss it. Our eyes, ears and nose are essential trout-finding tools.

My memory takes me back to one spring morning last year. It was dead calm and the fog was so dense that we couldn’t see more than fifty yards. I could hear seagulls squawking in the distance. There was no mistaking they were feeding on something. We would catch the occasional whiff of slicks in the thick air. I trolled, stopped and listened, then trolled, stopped and listened, until finally we could see redfish crashing tiny brown shrimp out of the water. We went from a super slow morning to fast and furious catching. The fog eventually lifted as did our spirits. Our nose and our ears led us to the fish on that calm foggy morning.

We don’t have to play “Where’s Waldo” because most of the time the fish will show us where they are in the form of slicks, birds, color changes (aka muddy streaks), mud boils or surface activity. I love to hunt deer. Every year leading up to the season I look for signs such as scrapes, rubs, and heavily traveled trails, just to name a few. This usually gives me a pretty good idea where to set up. The same as visualizing where deer would travel down a certain trail or corridor, we should try to visualize which path the trout will take. This can be done by knowing where they are now and why, then by considering all of the combined forces that will cause them to relocate.

There will always be unpredictable circumstances when it comes to fishing and the timing will seldom occur when we think it’s supposed to happen. There are many questions that will be answered over the course of the next several weeks.

When will the real cold fronts start this fall? Will they come early then fade away like last year? Is this winter even going to be a real winter?  Will this be a wet fall and winter?

It’s a guessing game every year and that is precisely why we can’t simply use the same dates on a calendar year after year. Think about what we’ve learned as anglers through the years based upon water temperature, salinity and habitat, and then go from there. Fishing where fish should be, based upon historical knowledge is a fine starting point but we must apply the conditions laid out before us to pin-point their location by using every sense God gave us.