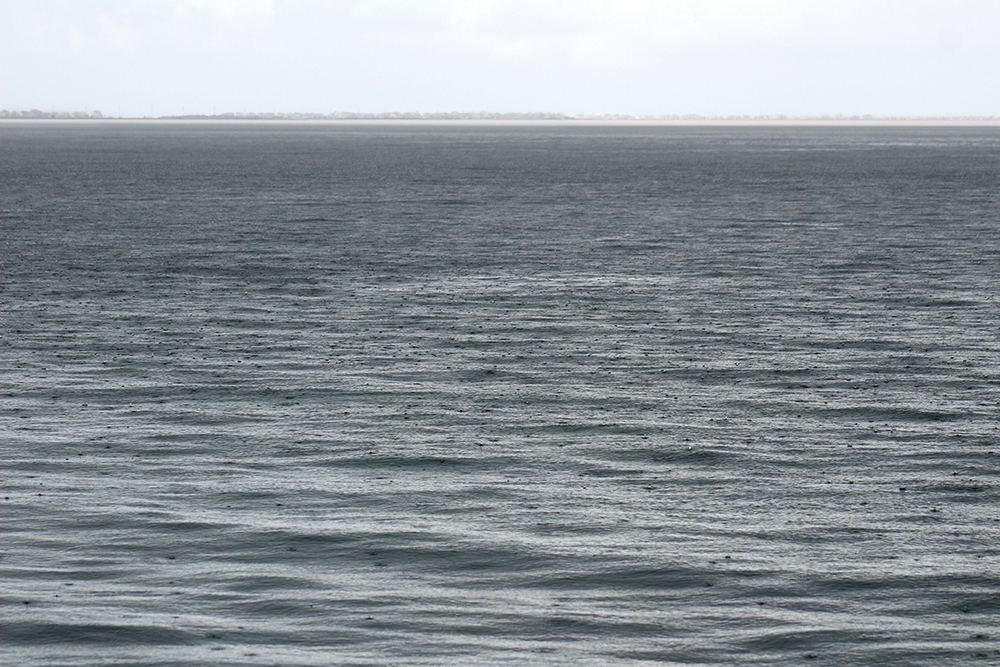 Slicks like these are a game changer if you’re paying attention. Notice the size. With the light wind and weak current on this particular morning, the trout were almost directly beneath these small slicks.

It was a brisk morning as my clients and I made our first drift. The first fall cool front had just passed through about 48 hours earlier. The water temperature on my new Garmin GPSMAP 1042XSV from Breakwater Marine showed 71.9°, a nine degree drop since the front arrived. The barometric pressure before the front was around 1012 millibars. It was now 1021 millibars on this beautiful bluebird morning. One of my customers made the comment, “God! What a gorgeous morning. We’re gonna hammer them today!”

For the record, I’m not necessarily a superstitious fellow but that’s typically a phrase I tend to avoid, especially right out of the box. I commented that his hammertime thinking could be a bit presumptuous and that a beautiful morning for beachcombing or a picnic doesn’t necessarily mean it’s a good day for fishing. Flashing a classic “you just crushed my hopes and dreams” look he asked what I meant. I explained that not only were we coming off a front that caused a sudden water temperature drop and barometric pressure rise, we were also two days on the backside of a full moon. Throw in the stiff northeast wind and the fact that we’re in the midst of our summer-to-fall transition period and we could be in for a tough day.

I went on to tell my crew not to worry because I didn’t think the trout I’d been on prior to the front had moved very far, if at all. They just may be a little harder to trick given the circumstances. We continued to drift over the crest of this narrow finger reef in the depths that had been producing. Unfortunately, everything up shallow looked like dead water. No mullet. No slicks. No wakes. Nothing.

After another four or five drifts through the area I knew we were going to have to make a move. As I mentioned, most of our fish in the days prior had been coming from the shallowest part of the reef, which was about 2.5 feet. I decided to let the boat drift out into 4-plus feet on our last pass just to see if maybe those trout had fallen out deeper. As my boat approached 5-feet I told the guys to reel in; it was time to relocate. Low and behold, as one of the guys was reeling in his rod loaded with a solid speck. That’s when I said, “Okay guys. Cast!” We began noticing several small slicks emerging and the occasional mullet flipping along the deep edge of the reef. Apparently the pressure and water temperature changes had caused the fish to move 100 yards or so off of the shallow crest and out into deeper water. We continued to work the outside edge of that drop-off and ended up having a fantastic morning.

There was another morning recently that started in a similarly slow fashion. We arrived at our initial stop to find dozens of beautiful trout slicks. The smell was so incredibly strong and the sheen on the water was so obvious, I knew in my mind we were getting ready to experience an epic bite. By the way, trout slicks are one of my favorite smells on the planet. The only other smells that even come close are gunpowder from the first few shots out of a duck blind early in the morning and exhaust from an old two-stroke outboard. I know that last one’s kind of weird but that smell brings back memories that are near and dear to my heart while growing up on the bayou.

Taking into account the wind direction and current, I got the boat lined up to drift towards the newest slicks (the smallest ones) that were popping.  Armed with an array of soft plastics ranging from MirrOlure Lil Johns to 5-inch Saltwater Assassins, we all began casting into the hot zone. Our first pass yielded one 18-inch trout and only a few other very subtle bites. We were disappointed to say the least but I knew the trout were there given the obvious signs. I trolled my Whaler back around for another drift but this time I went even further upwind and up-current, thinking that maybe I got too close to the fish on the first drift. The wind was just stiff enough to produce a moderate chop so I made sure to keep my motor turned hard right to help prevent waves slapping the transom. This coupled with the use of my trolling motor ensured that my bow stayed slightly facing into the chop. We were only in five feet of water and it was obvious that these fish were in a negative feeding pattern and paying attention to every little detail would help increase our chances of tricking a few.

After countless drifts and every type of retrieve you could imagine we were able to fool thirteen decent specks by basically dragging our baits on bottom. The wind eventually blew us off of that spot but I knew there were a lot more fish present than we had caught. It was obvious they had already fed before we got there. Stomach contents in the trout I cleaned later revealed heavily digested shad, which meant the trout had fed in the wee hours before we arrived. Looking back at the solunar chart I noticed that the major feeding period (moon overhead) was from 2:34AM to 4:34AM. The moon was again on the backside of full, illuminated at 92%. The next day I had my clients meet me an hour earlier and it greatly improved our results!

As November approaches fronts will become more frequent and trout patterns can change from week to week. Sometimes the changes can occur even in the same day.  Most folks believe that the best bite is the day before the cool front. While this can certainly be true I have personally come to know that the best bite is before, during and after fronts. The key is to realize how the changes affect the fish and then knowing what adjustments to make.

Where were the trout before the front? Were they up shallow and feeding aggressively? What were they feeding on? Will the post-front high pressure push them a little deeper, and will they be lying close to the bottom, fat and happy after gorging on shad the day before? If so, then they should be in full-blown regurgitation mode and the slicks from feeding on those oily shad should be plentiful and sufficiently defined to show us where to cast.

This month will provide plenty of signs to anglers who are willing to use them. We’ve experienced another unbelievable shad and shrimp hatch again this year. When things are clicking on all cylinders, hovering gulls and terns will be feeding on fleeing shrimp as trout and reds blast them to the surface. Ledges, finger reefs, bayou drains, peninsulas, and other ambush points will noticeably hold concentrations of mullet and shad. Slicks, color streaks, and mud boils will lead us to the fish, especially during tide change and during pre-frontal conditions.

Other times, such as after a front, during slack tides, etc., the signs will still be available but are not likely to jump right out at us. This is when we have to put our thinking caps on and understand the behavior patterns of the fish we seek to catch, especially with regard to changes in the weather. Knowing the impacts of these changes should point us in the right direction. Then we’ll use those more subtle signs such as an occasional flipping mullet or a couple of small slicks just off a deep ledge to greatly increase our odds even during the tough stretches.

Signs of Fall on Galveston Bays