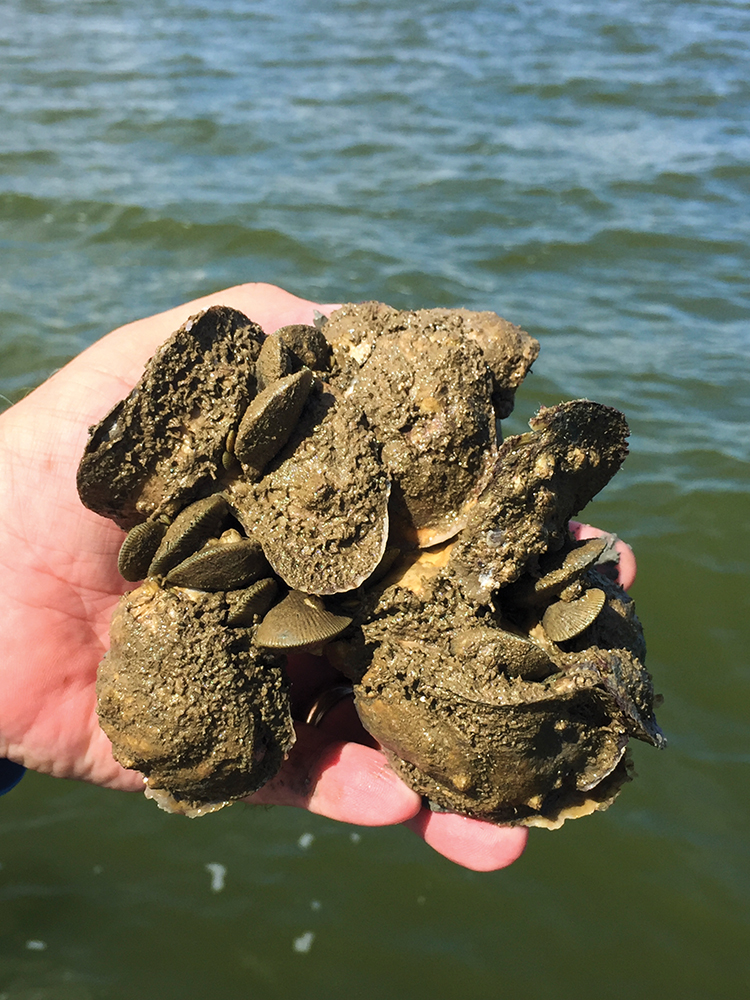 When river rock is planted and everything comes together at the right time – Success!

As I type this story the water just about everywhere in the Galveston Bay Complex is gaining a greenish tint. Upper Trinity Bay is the only exception but I’m hoping that will change soon. I don’t know how many shad hatches we normally have each year but we’re seeing billions of them all over the bay, ranging from 1-centimeter to 3-inches in length. Most areas seem to have plenty of shrimp and mullet as well.

So with all of this forage spread out all over the bay how do we narrow our search?  Areas with bottom grasses are good. Hard sandy bottoms with corn row guts especially near passes can certainly be productive as well. The surf can be phenomenal when we’re blessed with calm conditions. All of these areas will hold fish on and off throughout the summer but I’ve found that the more consistent bite tends to be near some type of hard substrate and in my profession consistency is king!

With warmer water this time of year, tons of marine life within our bays will gravitate to various types of hard bottom surfaces. I often refer to these hard surfaces as substrate.  The most appropriate definition I’ve found for substrate is – an underlying substance or layer. Or, the surface or material on or from which an organism lives, grows or obtains its nourishment. (Oxford Dictionaries)

This one is a bit interesting because even though live oysters grow on substrate they are also substrate themselves because oysters grow on top of oysters. Most days here along the Upper Texas Coast we’ll be concentrating on live oyster reefs in 6 to 10 feet of water. There are several reasons trout will go deep this time of year. At times there is fresh water in the upper part of the water column so, out of necessity, trout will stay in the salty water near the bottom. In addition, the water is typically cooler down deep and the dissolved oxygen level is higher. Sometimes the lower portion of the water column is simply where the food is.

Live reefs breathe more life into our bays than any other type of substrate we have and as a result tend to hold more trout more consistently. Spending lots of time drifting over reefs we’ll eventually find the sweet spots. These sweet spots are usually shallower humps on the reef.  We also catch plenty of fish near the edges where the reef transitions to mud. I believe the trout frequently slip out over the cooler mud bottom as water temperatures continue to rise throughout the summer. It’s common for us to set the anchor where we can make long casts to reach the school. I’ve noticed that our bites will often come in waves as the school tends to continuously circle out then back onto the reef’s edge. Making long casts up-current, then letting our lures fall near the bottom while being carried by the current puts our baits right in the face of willing specks. Soft plastics such as MirrOlure Lil Johns rigged on an eighth ounce jighead are perfect for this application as they sink faster and cast further than any other soft plastic in my leaning post.

We don’t always necessarily target the deeper reefs. Shallow reefs along shorelines and in back lakes can also be very productive, especially early in the morning or after rain showers have temporarily cooled the water. These areas may not always give up the numbers that deeper reefs will but the quality is often better and we have the added opportunity of tricking a few redfish and flounder. I typically like to work more topwaters and twitchbaits in the shallow reefs for two reasons. Soft plastics rigged on jig heads tend to get hung up too much and vibrations created by most suspending and floating hard baits travel quickly through the shallows calling in willing predators. I’ve never been a big believer in the whole “match the hatch” thing when it comes to speckled trout. I truly believe that they feed more based upon vibration, sudden movements, and color contrasts.

These three types of substrates are not only key to rebuilding oyster reefs but they provide some excellent fishing opportunities during the process. River rock has proven to be the very best base to use when attempting to grow new live reefs. Unfortunately, the main quarry from which this type of rock is obtained is in short supply. It’s my understanding that there are some quarries much further from the coast but the expense is often too much to bear. As a result we are seeing more limestone used in recent years.

Limestone is a form of calcium carbonate. Calcium carbonate begins to slowly break down when there is a drop in the pH level. Acidification in coastal waters is an extensively studied phenomenon that has apparently been going on for years. The culprits of acidification range anywhere from carbon dioxide emissions to run-off (both point source and non-point source) to algal blooms. Most of the contributing factors are intertwined in some form or fashion. For example; excess nutrients such as nitrogen and phosphorous from lawn fertilizers can eventually find their way to the bay and then rapidly stimulate the growth of algae. Under the right conditions algal blooms occur causing hypoxia (oxygen depletion), foul odors and toxins. As the algae dies decomposition occurs and carbon dioxide is released into the water causing acidification. (“Understanding the Science of Ocean and Coastal Acidification,” www.epa.gov)

Empty oyster shell from area oyster dealers has been used as cultch material for years to replenish reefs. Oyster dealers harvest and shuck a percentage of their oysters.  Much of the empty shell is loaded onto Louisiana lugger style boats stacked all the way to the tops of the pen boards. The shell is then transported to oyster leases and strategically placed in areas to create more surface area for new oyster growth. Since oyster shells are predominately composed of calcium carbonate they can be susceptible to the same fate as limestone. However, what we hope for when using these types of substrates is that the timing is such to allow for a natural organic layer to form quickly.  This provides a surface upon which oyster spat growth can take place fast enough to help prevent the deterioration of an otherwise exposed substrate. This initial slim layer and subsequent oyster growth usually occurs within the first year after planting. Under the right conditions (optimum salinity, water temperature, and sufficient nutrients) oysters can reach three inches in length (lip to hinge) within two years.

I have found that fishing is best on all three of the aforementioned substrates in the second and third year after initial construction. My theory is that the new oyster growth and subsequent filtering of phytoplankton becomes a magnet for dozens of tiny marine organisms followed by countless other marine species such as crabs, shrimp, mullet and shad.  When it all comes together the buffet line for trout, reds and flounder is open for business!

Much effort has been put into erosion control (and rightfully so) in recent years. While these projects aren’t necessarily intended as substrate per say, the material used to build them technically meets the definition of substrate. Common materials used for revetment construction around the Galveston Bay Complex are limestone and concrete chunks. They are typically placed along shorelines and around islands.  Organic growth on the hard surfaces support all sorts of marine life.

Granite rocks along jetties and dikes similarly promote the growth of algae, barnacles, oysters and mussels providing habitat and rich food sources for everything up the chain.  The same can be said for bulkheads and pier pilings. I like to troll along such areas while looking for rafts of mullet, pods of shad and/or slicks. Keeping the boat at a distance to enable reaching the rock edges at the end of your cast is optimum. Getting too close will spook the fish. MirrOlure Top Dogs and Rapala Skitter Walks are great topwater choices when trolling the rocks. Of course you can never go wrong with soft plastics like Saltwater Assassins or MirrOlure Provokers.

The various types of substrates throughout our bay system, and even along our beaches, will offer some of the best opportunities over the next few months for catching quality trout and redfish from a boat or from land. Now let’s get out there and take advantage of the opportunity. Good luck and stay safe!