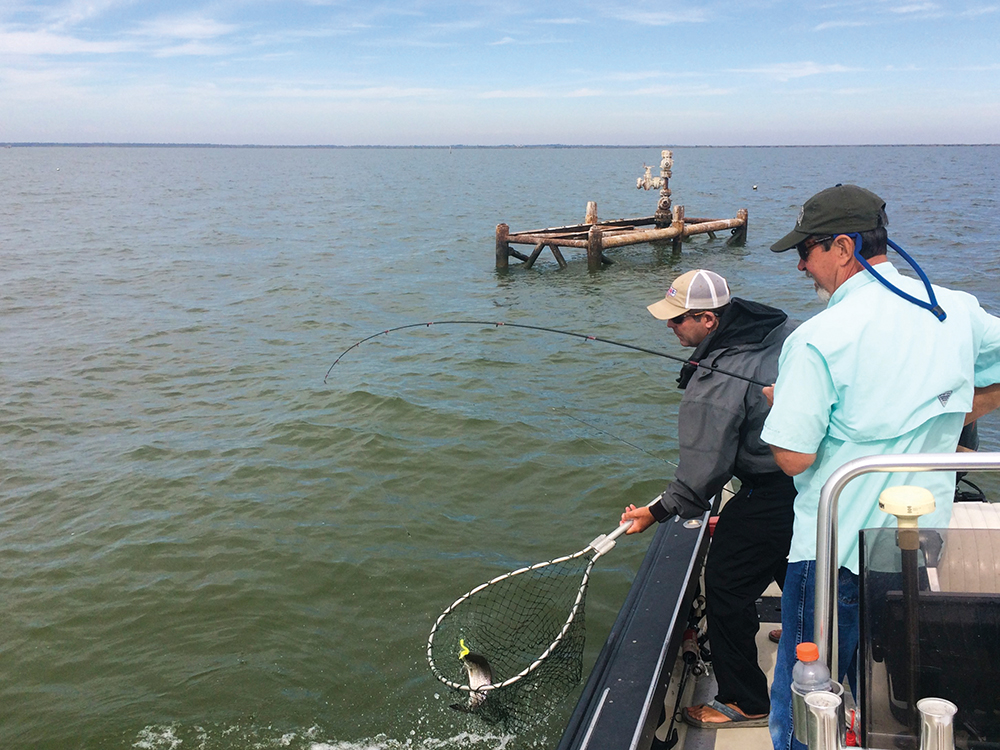 June kickstarts a several month stretch during which fishing becomes about as consistent as it ever gets. Not only is June one of the easiest months for me to put my clients on fish that are willing to eat, but it’s a great month to get the kiddos bit too, not to mention those who are somewhat apprehensive about using artificial lures.

Water temperatures will stay in the upper 70s to low 80s. Forage species will take up seasonal residence over shell reefs and other structure. Trout and redfish will follow; trout will pretty much stay put for the next few months. More calm days will allow access to previously blown out areas. There will be less guesswork by folks like yours truly and game plans will come together more frequently. Of course, patterns can be altered by things like excessive rainfall, but let’s pray we don’t have to go through that again, anytime soon. To a lesser extent, fishing pressure and boat traffic can also push trout around a bit, but they usually don’t go far. In most cases they will temporarily swim out to nearby satellite reefs. I see this happen often, especially on weekends. Speaking of game plans, let’s discuss some of the best focal points and strategies for success.

Shrimp (mainly brown shrimp) will continue their exodus from the marshes, through the bays, and out to the gulf during early summer. There will be some hoppers (pink shrimp) mixed in with them as well. Remember white shrimp don’t make their main push until fall. Seagulls and terns will make finding schools easy as trout, reds and the less-desirable species such as gafftop push shrimp to the surface as they feed on them. The best bet for catching keeper-sized trout and redfish under birds is to find them working over oyster shell or in shallow water areas. Most groups working over deep mud are small trout, sand trout, gafftop and lady fish. If you have kids or less experienced lure anglers on board, casting to these deep water schools can still provide plenty of excitement. However, I highly recommend using a pair of needle nose pliers to crimp down the barbs on the jighead hooks. This will not only help reduce the mortality of smaller specks but it makes releasing all species quick and easy.

It’s important to approach the school properly. The front (leading edge) of the schools typically have the larger fish while the trailing edge can be made up of smaller fish and unwanted scavengers such as gafftop (aka snot sharks). However, there are times when focusing on the back end of a school can be beneficial. In recent years we have more and more open-water schools of over-sized redfish in our bays. Sometimes, our only hope of catching slot reds out of such schools is to cast to the trailing edge. Just like with speckled trout, it seems to be a pecking order thing. While just about any lure will get the job done while working birds, various soft plastics and swimbaits work great.  Furthermore, I would much rather have 3 or 4 clients chunking plastic tails as opposed to them wielding topwaters with treble hooks. Bad things can happen during the heat of the moment. I’ve not only seen that movie before, I have unfortunately also starred in it.

By far, my favorite way to target trout is by focusing on slicks. There are several types of slicks. Some are caused by regurgitation. Some are the result of feeding (especially when feeding upon high lipid content forage such as shad). Last, but not least, we refer to some slicks as poop slicks.

Regurgitation slicks tend to be the most well-defined. These thick-sheened, hard-edged slicks are the easiest to identify. Feeding slicks tend to be a bit more faded or bled-out compared to regurgitation slicks. However, what they lack in definition they make up in quantity. It’s not uncommon to see 10 or 12 feeding slicks pop up all at once in a small area. While poop slicks are still a good indicator of fish in the area, they are the most difficult of the three to see. They are generally faint and easily stretched out by wind and current.

While we don’t typically see the huge rafts of mullet in the bays that we used to see years ago, there are still enough concentrations of various types of bait to point us in the right direction. This is especially true when bait is concentrated over preferred structure such as oyster reefs. Mullet and shad are the predominant forage species observed throughout summer. I like to throw medium to large topwaters along edges of pods of mullet that are often seen congregated just below the surface over reef edges.

I frequently refer to oyster reefs as structure and they most certainly are, but also high on my list are several other prime targets which fall into the structure category. Wells and well pads rank right up there with reefs at certain times of the year. We typically troll-motor around a well until we start getting bites and then slip the anchor over the side. More often than not the fish are found on the down-current side.

It’s quite common to see slicks and shad pods near wells, too. While I generally use an 1/8-ounce jighead most of the time, fishing wells and well pads sometimes warrants the use of 1/4 and even 3/8-ounce to get the lure down to the fish when the currents are strong. This is only a general rule as there are always exceptions. We won a large tournament one day throwing topwaters and wake baits near wells in 9 feet of water.  On that particular day shad were getting showered out of the water by chunky specks.  The best advice I can give is to let your eyes tell you what to throw.

With the excessive wave action from an increase in commercial vessel traffic along with natural currents, the placement of revetment rocks has become rather commonplace throughout our bay system in recent years. The idea (and a good one at that) is to absorb energy from waves and currents to help prevent erosion. Guess what else these rocks can do? Yes sir! You guessed it! They can hold some really nice trout and reds. I like to troll along rock edges looking for bait and slicks. Corners, bends and openings tend to produce the best. You can pretty much pick your poison as far as baits are concerned. Last year, twitchbaits such as the Barboleta LeLe and Double D were responsible for a lot of our fish, especially the larger trout.

When it gets right the surf can be some of the most exciting trout fishing you’ve ever experienced. Calm summer mornings will bring clear water to the beach. Rafting mullet and the occasional jumbo white shrimp getting blasted out of the water is an exhilarating sight to see. Topwaters, swimbaits, 51M MirrOlures and, of course, soft plastics are all in play.

While June in our area kind of marks the beginning of meathaul season for many, I urge everyone to just keep the fish you need and let the larger ones swim free when possible. We can all have a blast but let’s keep sustainability of the resource on the front burner. I hope everyone has a great beginning to the summer season.