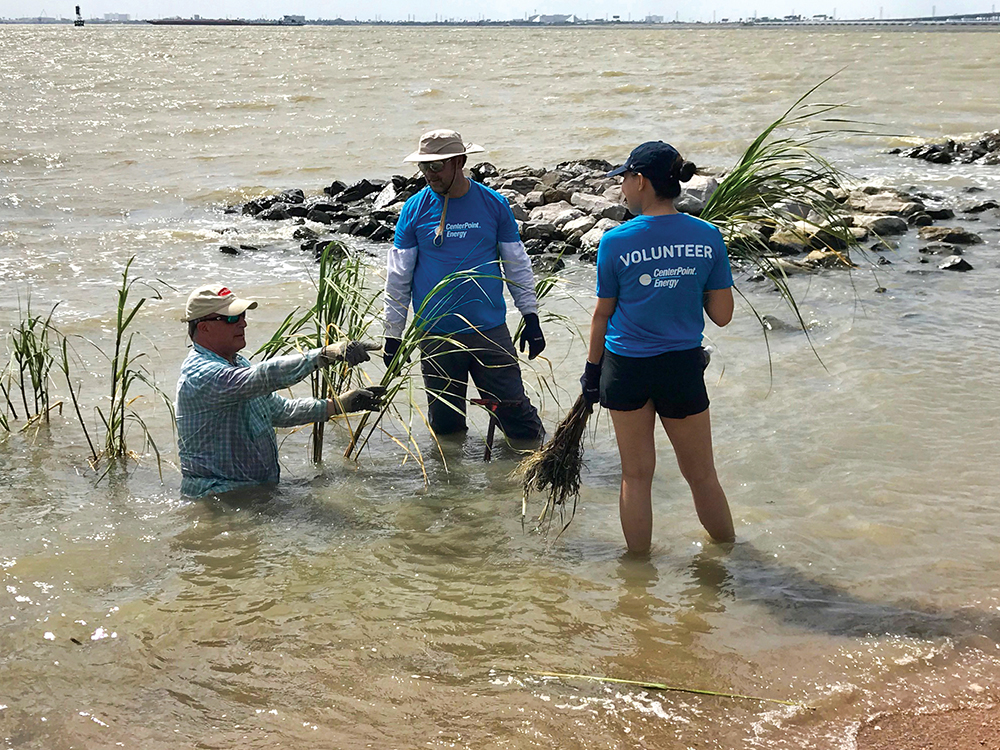 “We’ll get behind this finger reef. It’ll get us out of the wind and we’ll be able to find some better water to fish.” That used to be a common dialogue between me and my clients on windier days. Not so much nowadays. That particular reef was basically an extension of a point that jutted out from the shoreline and it has all but eroded away the past few years. The clear, fishable water that used to lie behind it is now liquid mud on breezy days. The sediment deposited there has pretty much taken away the wade fishing opportunities, unless you enjoy trudging through knee-deep silt. There used to be quite a few areas such as the one described, that is until the giant wakes of tanker vessels coupled with natural erosion and subsidence exacted their inevitable toll on this and many similar places through the years.  Our bays are continually changing. In order to better understand the changes we don’t necessarily have to go back to the Ice Age, going back to the beginning of the Industrial Age will be more than adequate.

According to the United States Census of 1850, Galveston was the largest city in Texas with a population of 4,177 people. The island’s maritime industry was prospering, thus requiring many changes between 1850 and 1900. Following the Civil War, an increase in commercial trade and transportation required deepening and widening of the Houston Ship Channel to handle increased traffic to and from the ports of Houston and Galveston. In addition to the U. S. Army Corps of Engineers (USACE) extensive channel dredging projects, they saw the need for a pair of granite jetty walls to provide protection for the Houston-Galveston ship channel. Originally constructed in 1874 and completed in 1898, Galveston’s north and south jetty walls were designed to reduce sediment transport and siltation in the ship channel. The South Jetty is 35,899.9 feet (6.8 miles) long and the North Jetty is 25,907.2 feet (4.91 miles). (Citation: Galveston County Erosion Response Plan, Agenda Item No. 23a, August 7, 2012.)

Galveston would continue to prosper leading into the late 1800s with its population growing to more than 22,000. In 1880, Galveston’s population was 22,248 and Houston’s was 16, 513. (Galveston Bay: A Brief History of One of America’s Great Waters, Courtney Smith). The 1900 Storm changed everything.  More than 6,000 islanders were killed. Many businesses and families moved inland causing a population and economic shift from Galveston to Houston. This required further deepening of the Houston Ship Channel. Not many years later (1915), the Corp of Engineers built the first version of the Texas City Dike to help reduce silting of the Texas City Channel, the main conduit for tanker and barge traffic serving the petrochemical industry that was booming there. The initial crude attempt was just that despite a hefty price tag of $1.4 million. The piles of timber topped with channel dredge material used for the original dike eventually washed back out into the bay. It wasn’t until 1931 when the Corps added granite rocks and boulders to help reduce wash-outs. After years of political battles between the City of Texas City and the Corps, land acquisitions and make-shift patches to combat erosion that included scrap automobile bodies, rock, broken brick, and waste from the city dump, an application to build a new retaining wall was submitted in September 1945. There have been many improvements since then to what a lot of folks refer to as the longest manmade fishing pier in the world (5.4 miles).  (Texas City History, Moore Memorial Public Library).

Chemical companies and oil refineries were increasingly attracted to the area, all the way up to Baytown. Demand for more and larger barge access continued from the 1920s and beyond. This resulted in the “deepening (and widening) of the Houston Ship Channel to 34 feet in the 1930s, to 36 feet in the 1940s, and to 40 feet in the 1950s. Presently, the Houston Ship Channel is a 52-mile long channel dredged to 45 feet deep.” (Galveston Bay: A Brief History of One of America’s Great Waters, Courtney Smith).

In 1955, the Texas Fish and Game Commission (now Texas Parks and Wildlife Department) created a man-made cut through a narrow stretch of Bolivar Peninsula connecting the Gulf of Mexico and East Galveston Bay in an effort to improve recreational fishing. Rollover Pass has been a very popular fishing spot especially for big trout through the years. Unfortunately, natural sediment flows from the eastern beach of Bolivar have not only contributed to beach erosion but also excessive siltation in Rollover Bay and the Intra-Coastal Waterway (ICW).  (Galveston County Erosion Response Plan, Agenda Item No. 23a, August 7, 2012). I can personally attest to the siltation of Rollover Bay as I have spent many hours wading and drifting that area through the years. Many areas there are too mucky to wade and many of the oysters have been covered with silt. This being said, my opinion is that tugboat-barge traffic in the adjacent ICW could possibly also contribute to the accumulation of sediment there as well.

There are many other changes that have taken place through the years in addition to the ones I’ve already mentioned. These include drought, hurricanes, and floods. Most all of these have changed the dynamics of the Galveston Bay Complex forever. So what are we doing to mitigate and prevent the negative impacts caused by man and nature?

Not only does erosion cause loss of shorelines and wetlands, but the resulting habitat loss also has a negative effect on marine life. Up until a few years ago geotextile tubes were used to help reduce shoreline erosion. To learn more about modern methods used to control erosion I spoke with Lee Anne Wilde who is Living Shorelines Program Manager for the Galveston Bay Foundation. According to Lee Anne the geotubes don’t hold up in really high energy environments. Limestone and concrete chunks are the better options these days. I’ve personally witnessed the degradation of the tubes in front of several West Galveston Bay coves. As confirmed by Lee Anne, geotube material breaks down due to UV light, boat anchoring, bird activity and just general wear and tear.

Droughts, floods, hurricanes, and dredging projects have all taken their toll on live oyster reefs in the Galveston Bay Complex to the tune of more than 12,000 acres of lost reef. Through various sources of funding the Texas Parks and Wildlife has been planting river rock and also limestone for more than 10 years. TPWD continues to discover better ways to plant substrate to help reduce silting over of newly planted rock materials.

Planting of river rock in mounds rather than large flat areas - “When we first started planting cultch for oyster restoration we applied approximately 400 cubic yards of cultch per acre. This resulted in a relatively thin veneer (3-4 inches) of cultch spread over the area. More recently, we’ve started using a methodology of creating a field of small mounds of cultch material spread over the restoration area. Each mound consists of approximately 4 cubic yards of cultch, resulting in a mound that’s about 2-feet tall in the center and has a radius of about 10 feet. These mounds are typically placed in parallel rows to each other at a density of about 100 mounds per acre. The use of these two cultch application processes is dependent on the conditions at the site (e.g. water depth, substrate, etc.).”  (Lance Robinson, Deputy Director/Management Resources Manager TPWD Coastal Fisheries Division).

Progress and population growth have dictated what changes to make in order to not only be able to handle growth but for the estuarine environment to continue to prosper. Subsidence and erosion have caused islands and reefs to disappear. Deepening and widening of channels have not only caused natural reefs to become buried in silt but have also changed the hydrology and salinity balances of our bays. Hurricanes, tropical storms and ship traffic have accelerated shoreline erosion as well as habitat destruction. Damming of rivers has changed the freshwater inflow into our estuaries, further upsetting the natural salinity balance. Whether it’s widening or deepening our channels or building rock groins that are miles long, all changes come with consequences.

Some changes are man-induced while others are caused by Mother Nature herself. Regardless of the culprit, we as stakeholders are charged with attempting to find solutions in an effort to protect and improve our estuaries for the future. We can’t stop progress and we can’t control Mother Nature, but everything we do is magnified because of them. In the meantime, fishing is good along the rock breakwaters.