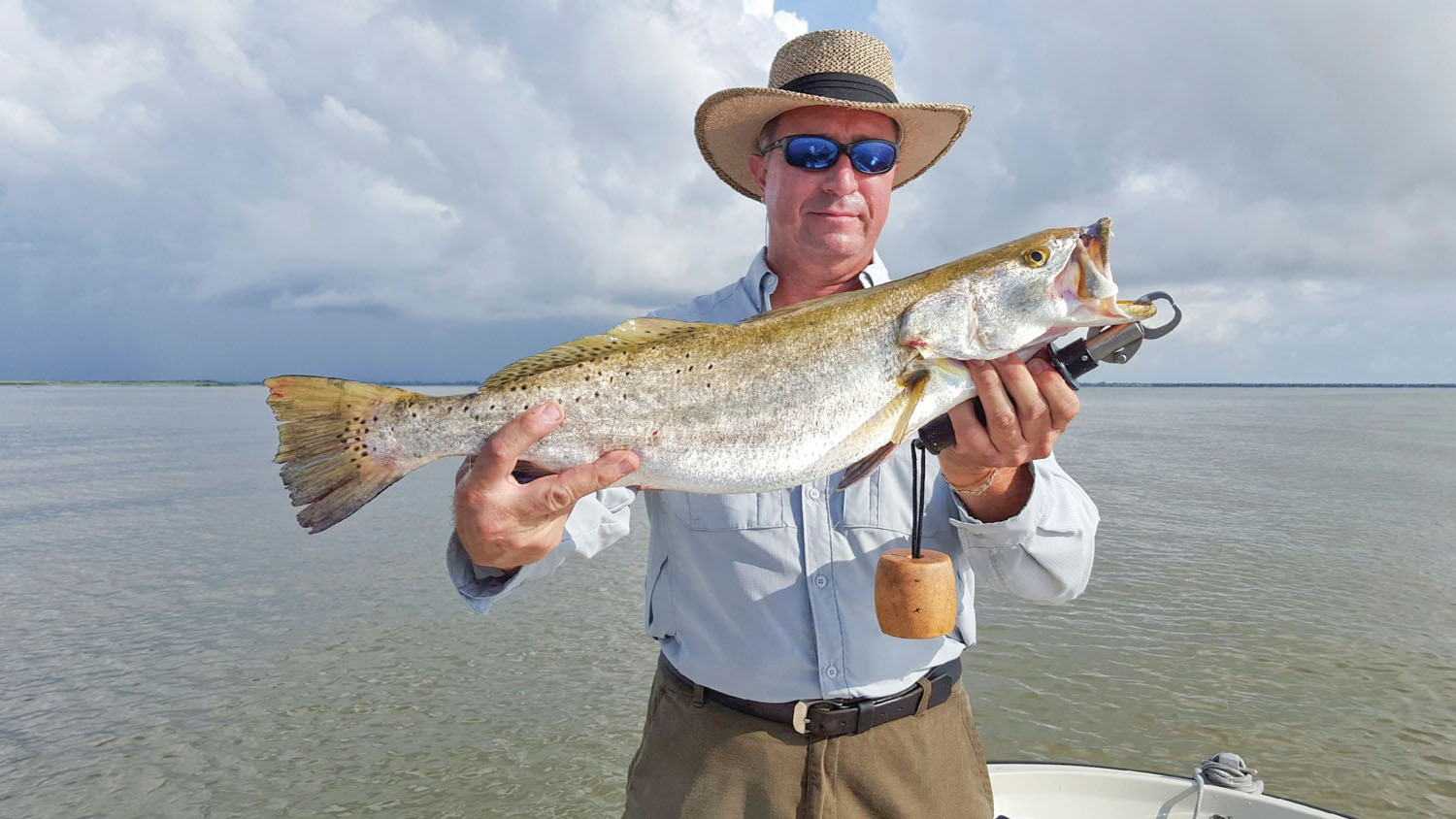 Mike Silva with his personal best 7.25 pounder (CPR) caught while drifting a secluded stretch of shoreline with scattered shell.

He left in the dark by himself most of the time. A buddy would join him on rare occasions, but was sworn to secrecy about the locations they fished. It was just fishing, but to him it was more, much more. He'd been fishing these waters since he was a youngster and he knew every nook and cranny between every reef and every sweet spot along all the shorelines. With each cast he clung to the hope that no one would see him doing what he loved to do in his small sanctuary areas. He didn't have many close friends in the fishing circles. He had discovered something he loved to do at a very early age but learned within a few years that others craved his knowledge. As he became older his awareness of overzealous fishermen lurking in the distance increased. He learned when to relocate once they started noticing his pattern. His own mother didn't even know where he was fishing, so certainly others behind center consoles were not worthy.

He once caught a 31-inch trout and a smile of satisfaction found its way across his face as he admired her majestic beauty before allowing her swim free so someone else might enjoy the thrill of landing a giant. No photos. The image was burned into his brain and that was good enough. The internet did not exist but he wouldn't have shared it anyway. These were his fish that he located on his own through years of experience and countless hours of hard work and sacrifice. His proficiency for studying the movements of trout based upon the influences of Mother Nature was exceptional. His ability to catch them would have placed him in the trout hall of fame if such existed. He had a gift and I'm certain he knew it, yet he would just say he was lucky. A humble man he was, spoke with few words, but always wise words.

He savored every experience that came with fishing. Beating his chest over a box of fish was not in his DNA. What others brought to the cleaning table was irrelevant. All that mattered to him was that he could catch 'em his way and if he didn't, that was fine too. The few fishermen he exchanged dialogue with at local marinas were not yet born when he was catching fish where they are now. It's somewhat amusing to him that they gloat about the fish they've caught in areas that he has fished all of his life, but he can no longer fish there because of them. He hears of big trout being caught by these new fellows in areas that he cut his teeth on, and then becomes a little disheartened that he may never be able to fish those areas again. Seeing one or two fishermen is understandable, but he knows when the wrong ones find out, the news spreads like wildfire. It always does, and his heart sinks a little more each time. He wonders what is left for him to explore. A few days pass and he finds other fish that no one else knows about, but wonders how long it will take before they find him again.

Over the years, his hands along with his soul became callused. You could strike a match off his face because of too many hours in the sun but his deep blue eyes had taken thousands of photos that others can only dream about. So, to him, it was worth the sacrifice. His dream was to catch that one for the wall even if he died trying. Someone once asked him where he was fishing. He never spoke to them again about fishing because they broke the cardinal rule which was to never ask a man where he was fishing.

As the man grew older and wiser he realized that he really couldn't trust many fishermen. He would leave the dock well before sunrise and park his boat in the marsh where few would notice. Over time, others eventually found him but by then he had discovered other areas. Staying 3 to 4 weeks ahead of the crowds was his specialty. It was almost like a game to him until one day his window had shortened to 2 or 3 days. As time passed his passion for fishing faded, ultimately resulting in him vowing to never fish Galveston Bay again. He purchased a cabin in Baffin Bay in effort to avoid aggressive crowds. He enjoyed almost two decades of catching big trout down there until others began to take notice. News of monster trout spread quickly and trophy trout chasers flocked in from hundreds of miles away. He initially resorted to nocturnal strategies to escape the crowds but it eventually became too much trouble and his old body just couldn't handle it any longer. In 2004 he sold his cabin, his boat, and all of his fishing gear, and devoted more time to his grandkids. In his 50-plus years of fishing only a handful of people knew maybe one or two spots he fished because he was dedicated to remaining silent.

I've known a few quiet men in my lifetime. Some are no longer with us and some still fish among us. Of the handful who are still around I have the utmost respect. It would be very easy for them to share their information with a few keystrokes. But they hold true to their secrets. Being comfortable in your own skin and not requiring praise or glory is impressive to me, especially in this day and age.

Quiet men are modest. A funny story comes to mind, the year one of my old tournament partners won Angler of the Year in the Spectacular Series. Each weigh-in was filled with more than a few guys who had the luxury of owning very fast and well-decorated boats with dozens of sponsor stickers and all the latest and greatest accessories. At the weigh-ins, anglers wearing jerseys printed with various sponsor logos waited with anticipation as they held sacks of fish that would hopefully give them a shot at becoming champions for the day and eventually for the series. (By no means am I poking fun as I know the importance of taking care of sponsors.) My buddy was always one of the last in line, often arriving to weigh-in with only a few minutes before cut-off, just enough time to fish his three trout out of the makeshift livewell (96 quart Igloo with oxygen bottle) of his old Montauk Whaler. As he stood on the stage in his white Fruit of the Loom V-neck and blue jeans still dripping from the day's wading, he was asked to provide a few details. He would offer a few short comments but the one he always closed with was, "I give all of the glory to God." That, my friends, is pure class.

This story is not meant to be gloom and doom. I'm simply trying to shed light on the way things used to be and the way I wish they still were. I was fortunate to spend the early part of my fishing days being exposed to good people, good etiquette and the quiet men who did things their way; the right way. That was a different time and place and we may never be there again. I still have hope, however, that we will try to be more like the legendary quiet men.