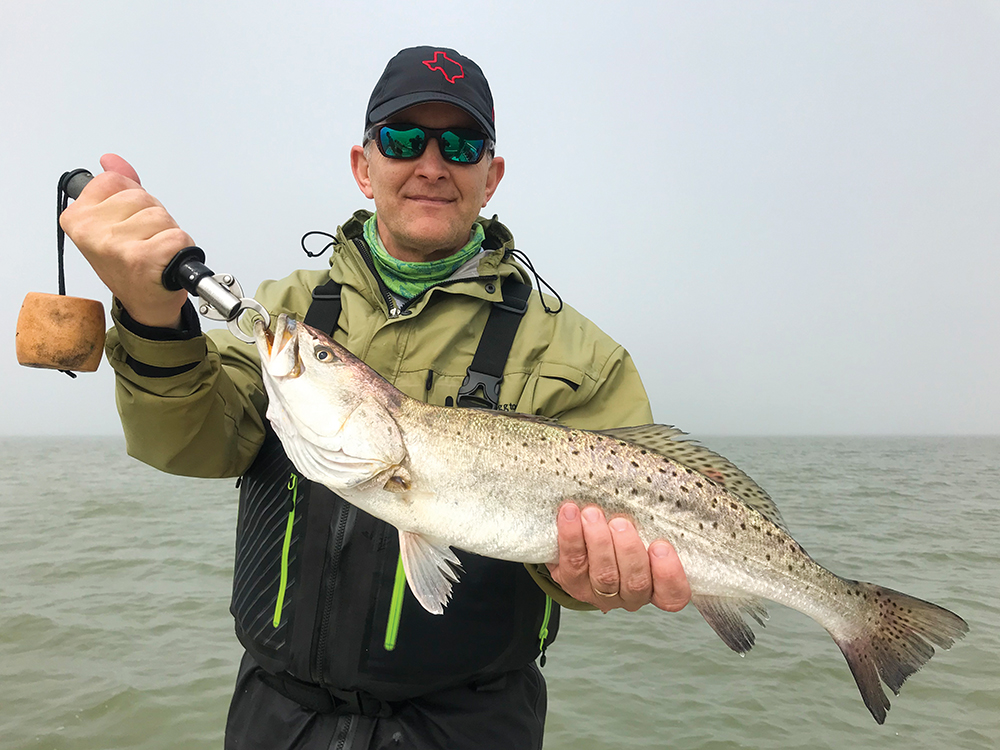 Todd Aiken always seems to trick a good one or two. This one was caught while drifting over hard shell then released after photo.

When I was a teenager and on into my early twenties, I believed the best way to catch trout was to wade fish. One of my fondest memories was standing on a small J-shaped reef not far from where I grew up casting a chrome and blue Jumpin’ Minnow along the edges of rafting mullet. The sights and smells of my experiences on that little reef are forever etched into my mind. Once I started guiding I had to learn how to fish from a boat because most of my clients either were not willing or simply didn’t have the proper gear to jump out of the fiberglass. As the years have gone by I’ve realized that drift fishing, at least here on the Upper Texas Coast, has often become more productive than wading.  My true love is and will always be wading, but I also love to get bit.

So why has drifting become a higher-percentage play over wading in parts of Galveston Bay?  The bottom landscape of shorelines, especially in Trinity, East and Lower Galveston, has drastically changed over time. Erosion, subsidence and habitat loss are the main culprits.  Some changes are naturally occurring while others are man-induced. For years, there were stretches of shoreline laden with live oysters and clams. There were ridges and sandbars that almost stuck out of the water on low tides but are now two- to 3-feet below the surface. Silting and erosion from storms and ship traffic have taken their toll.  Quite a few small reefs near the mouths of bayou drains have either shrunk in size or have been completely covered in silt. Small islands across the bay are now reefs, many of which can only be noticed when waves break over them during very low tides. Moguls, troughs and potholes along shorelines bordered by spartina (cordgrass) have become flats absent of the bottom undulations in which prey and predator fish alike took center stage on Mother Nature’s playground years ago.

Most of the primary habitat in the form of live oysters tends to be away from shorelines and out in four- to 10-feet of water in the areas I’ve mentioned. As a result, the heavier bait concentrations are found more in open bay waters compared to years past. It is well documented that live reefs serve as the main habitat for many marine organisms that make up the base of the food chain in our bay system and many other coastal estuaries. For the record, seagrasses rank number two behind live oyster reefs with regards to marine life support and West Galveston Bay has seen a very positive comeback in that category.

There are many other reasons we choose to drift rather than wade. I’ve had some days in the past month or so where we experienced post-front bluebird sky conditions. The high barometric pressure, clear water and low tides were not conducive to wade fishing the shorelines. Calm clear water creates a special kind of challenge when it comes to tricking trout with lures, especially big ones. Other than wading during late afternoon or early evening hours, drifting over deeper structure such as oyster reefs on days like this is usually a much better plan. The deeper water will provide a comfort level for the trout, thus making them more cooperative. Finding a patch of off-colored water out deep, created by high winds the day before, will further enhance our ability to apply such trickery using silly little plastic things with hooks in them. Throw in a few flipping mullet and we’re in business for sure.

Sometimes excessive boat traffic along shorelines will push fish out deeper. I witnessed this recently in Matagorda as there were countless boats pre-fishing for a tournament and burning shorelines while looking for fish. All of the conditions were right for wading that day but we caught the majority of our fish drifting just outside of ridgelines in water barely too deep to wade. Live oysters and color streaks aided in our ability to capitalize on the shoreline shenanigans.

In my opinion, there is an art to drifting, it involves positioning your boat in a way to give everyone onboard the best possible shot at capitalizing on a school. Setting up properly on a dirty streak, slick, or group of birds requires accurate observations of wind and current. Successful maneuvers most likely involve stealth-like use of your trolling motor. Sometimes it pays to momentarily keep your distance in effort to key in on all of the moving parts before making your move.

Of course, I’m certainly not saying that wading is a fruitless effort. Lord knows we continue to enjoy many days catching countless numbers of trout, reds and flounder along our shorelines. I’m just saying that those days seem to be fewer than they were say, 15 or 20 years ago. By the way, April is one of the better months for wading as shorelines will be flooded with higher tides and millions of juvenile forage species such as glass minnows and shad. High winds will also necessitate jumping overboard on many spring days as well.

Looking beyond spring we’ll be getting into the time of year where fish can hold tight to the shoreline early and then ease out deeper as the sun gets higher in the sky. We will see this pattern even more as we get deeper into the summer months when water temperatures rise late in the morning and on into midday. Slicks and bait concentrations will point the way to our success.

What lies beneath the surface of the waters we fish is ever changing. Decades of scientific research tells us that our average water temperatures are higher, sea levels are rising, and that we’re losing hundreds of acres of coastal shorelines every year. We can debate and discuss the many possible reasons but everything I’ve researched and personally witnessed throughout the years tells me that there’s some validity to most of these claims.

Trout follow a seasonal pattern every year but is that pattern the same as it was a decade ago? How about 40 years ago? The short answer is no. Why are there so many schools of oversized redfish that reside in our bays year-round compared to years past? Where are the giant rafts of mullet we used to see? Things are different these days. Does “different” mean that things are bad or worse? Not at all.  But, I believe it’s a healthy exercise to observe the changes that have taken place whether or not we can agree about the causes.

There are efforts being made to help reduce shoreline erosion as well as enhance habitat. The Galveston Bay Foundation and several other organizations continue to work diligently on this front. Within the past year, Texas Parks and Wildlife Department regulatory changes have taken place with regards to limits on spotted seatrout and other recreationally and commercially harvested species. Grant money continues to come into the state to help fund oyster reef restoration. I certainly wish things could move a bit faster with regards to the reef restoration but it’s my understanding that there are some shortages of prime substrate material such as river rock. Overall, things are moving in a positive direction and there are many changes that will ultimately improve our estuaries. In the meantime, you can find me drifting slicks along a drop-off somewhere because I felt like there was a reason for it on that particular day.