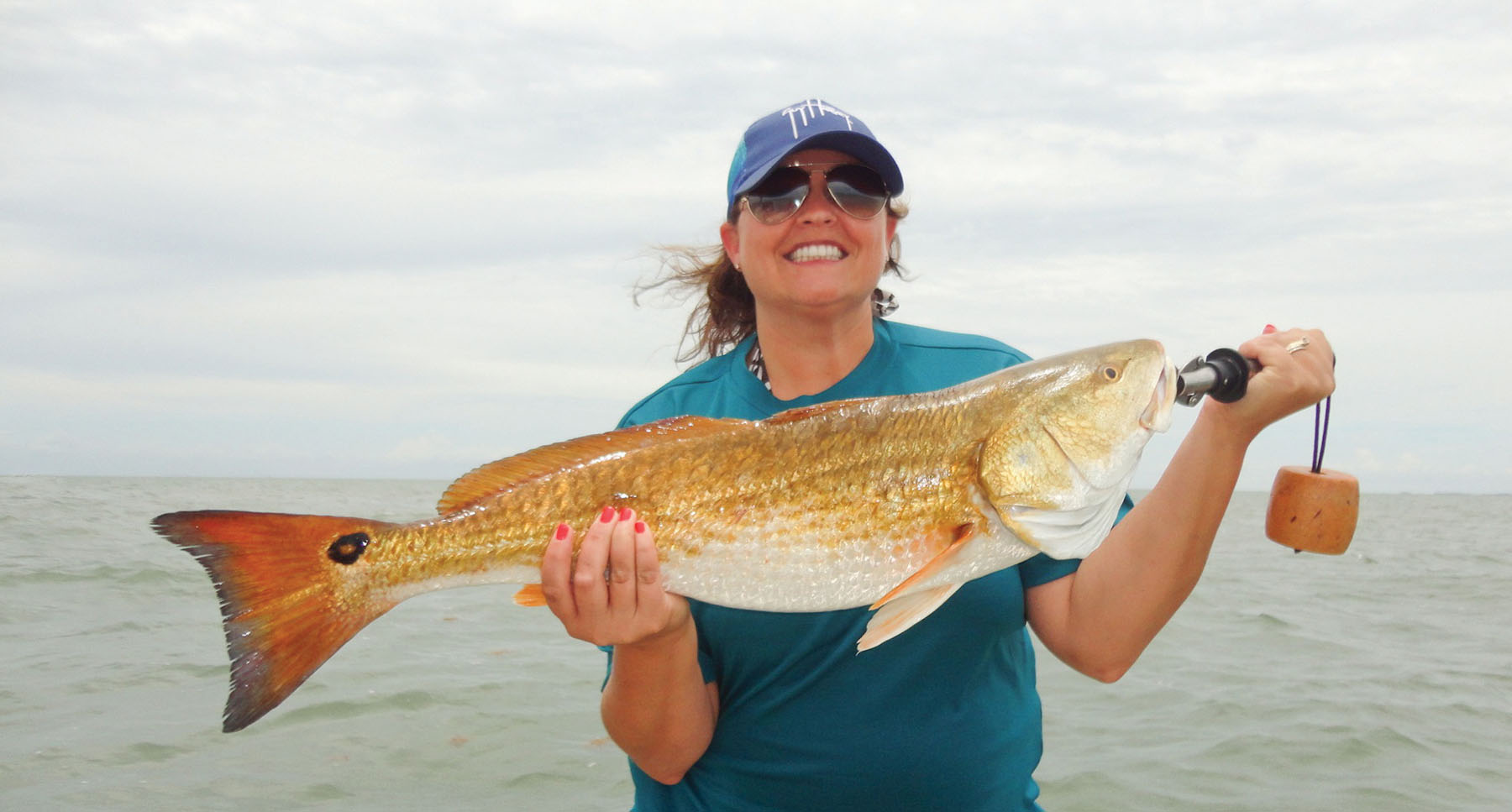 Ashley was elated with this big red!
On our way in, crossing the open bay, I noticed some large terns and seagulls hovering, spinning and diving over boiling water. It seemed a little early in the year to see jackfish, but it would also be uncommon to witness open-water schooling reds in March, especially schools of this size. I shut down the big motor after idling within about 120 yards of the school. While trolling closer we could see ribbon fish and shrimp getting terrorized. Seeing literally hundreds of these bronze-armored specimens on the surface provided more of a rush than the Monster energy drink I had downed an hour earlier. Catching and releasing dozens of 27 to 40 inch reds was a great cap-off to a spectacular day of trout fishing.

I know many who tend to turn their nose up at redfish as trout apparently have more glamour in their eyes. While trout fishing is fun, it's nice to do something different once in a while. Call them what you wish; Rubber Lips, Bottom Feeders or Carp, but targeting reds offers a new element and the thrill of the chase can be exhilarating. A fair number of anglers think redfish only live in marshes, back lakes or along grassy shorelines. Without a doubt there are good numbers of reds in those areas, but for much of the year there are large schools out in the middle of our bays. Many open-water schools go unnoticed because they're not being pursued. Knowing what to look for and devising a good plan of attack can turn an ordinary day on the water into a day to remember.

Prime Months
I've seen open-water schools as early as January here in the Galveston Bay Complex, but the most consistent time frame is May through early November. Other bay systems can vary as to when and where giant schools show themselves. I believe salinity, water temperature and available forage controls the timing. The large school mentioned above was the direct result of excessive rainfall pushing shrimp, shad and other forage species out of the rivers and marshes over a very short period of time. Aside from such anomalies, the best opportunities begin during early summer when most forage species become more abundant and reach a large enough size to induce redfish schooling activity.

What to Look For
As mentioned, schools can drive bait to the surface causing terns and gulls to hover fairly high above the surface before spiraling down to nab their prey. Birds over open-bay redfish schools have a different formation than those feeding above trout. The ones working over trout tend to stay closer to the surface in more of a low, hovering fashion. Mud boils that have the appearance of underwater plumes of smoke can be a tell-tale sign of feeding schools. Keep your distance while trolling and find the most well-defined clouds of mud. This is most likely the front of the school.

Other days you'll see extensive trails of small slicks often merging together to make larger slicks. Observe the wind and current then hone in on the smallest (new) slicks. Now you're on to something!

You may observe just one of these signs or you could see all of them occurring at once. Always keep your eyes peeled for signs as your cruising across the bay. It's not uncommon at all to stumble across an open water school while you're heading to your next trout spot. Keeping a pair of binoculars on hand is a good idea.

Location
Herds of reds can be found in 3 feet or 13 feet of water here in the Galveston Bay Complex. While redfish do like structure, they tend to be more partial to large concentrations of food. Remember, we're talking about large schools here, not one or two redfish cruising a grassy shoreline. The very reason they are "schooling" is because of the food. Forage species generally travel in tight schools and move along certain corridors with the currents. Current can be wind-driven or tidal depending on the area. Common areas here in Galveston Bay to find such forage include near deep channels such as the Houston Ship Channel. Mud and shell flats will hold schools that have converged upon prey as well. Redfish are very territorial and will frequent the same areas during the same time of year nearly every year. Once you have them patterned it becomes fairly predictable.

The Right Approach
Now that you've found them, it's time to get into stealth mode. How you make your approach is probably the most important part of this entire process. It takes patience and a good trolling motor and batteries is a must. I use a 36 volt lithium ion battery which charges through an on-board Stealth One charging system while running my outboard (www.breakwatermarine.com). Sometimes it takes 30 or 45 minutes to finally catch up to them before making the first cast. I've witnessed some boat operators plowing into schools under the power of their outboard. The "Rambo" method is not the answer and usually only results in one or two bites before the school vanishes forever. The only legitimate excuse for using this method is if you ate paint chips as a child or grew up under low-hanging power lines.

Whether the schools are slicking, mudding or feeding under birds, the first thing is to determine which direction they are moving. Then, take notice of the tide and wind direction and begin your approach. It's rather obvious with birds, but when observing slicks or mud boils - focus on the small ones. Large mud boils or slicks are generally old meaning fish could be hundreds of yards away. Whether you approach them from the leading or trailing edge depends on how fast they are moving. In my opinion, it's more effective to intercept the fast-moving schools. Setting up 100 to 150 yards ahead and letting them swim towards you is often the best option, especially schools that are on the run. The slower moving schools are usually more occupied with feeding rather than running. These are the ones that should be approached from the trailing edge and at an angle. The angle of the boat should allow everyone the opportunity for a hook-up. Another thing worth mentioning is making sure your reel is properly tuned, cleaned and has plenty of line. There's nothing more frustrating than finally catching up to a school and not being able to cast far enough. Keeping your eyes on the rest of the school while you're fighting the one on your line is also important. Otherwise, by the time you land your fish, you may look up and have no idea which direction they went or how far. It's also not uncommon to catch sand trout, specks and gafftop on the trailing edge of a school. This is usually a good sign that you're getting close.

What to Throw
There are times when I think just about anything would work, but there are a handful of baits that have proven to be very effective. The majority of the reds we catch are on Salt Water Assassin Sea Shads (four and five-inch) rigged on 1/4 to 3/8 ounce jig heads. The 3/8 ounce jigs are especially effective for making long casts because there are times when it's difficult to get very close to the school without spooking them. The 3/4 ounce Johnson Sprite gold spoons and KastMaster spoons work well especially when the sun is high in the sky. Sometimes reds will hit a gold spoon when they won't eat anything else and I can't think of very many other baits that will cast further than a KastMaster spoon. The vibration created by swim baits such as Berkley's PowerBait Rib Shad and YUM's Money Minnow have also proven to be irresistible to big reds. And, much like Assassin's Sea Shad, depth of presentation in the water column is easy to control with these cast-n-reel baits by simply changing the speed of your retrieve.

Whether you stumble upon a school or are actively in pursuit, the open-water game is a fun one to play. Please be aware that chasing giant herds of reds in the open bay can be habit forming and may result in missing those precious moments you would have otherwise spent pursuing the supposedly more glamorous speckled trout. Considered yourself warned!