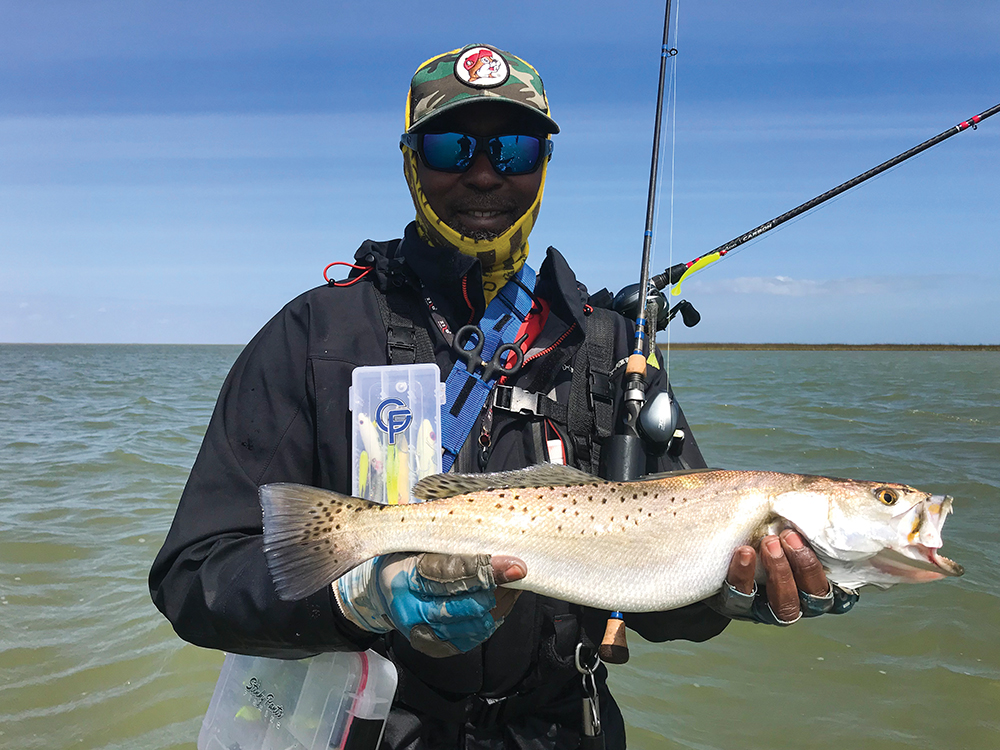 Creighton Larkin with a pretty speck he tricked while casting to slicks along a dirty streak.

My crew and I got a very early start this morning in an effort to try to capitalize on a tide change that was supposed to take place around daybreak. We’d been enjoying a pretty strong late afternoon feed for a few days leading up to the full moon but that successful streak faded with each passing day on the back side of the full moon. This forced my hand to adjust the timing of my next outing.

I thought surely the trout must be feeding really early since they no longer appeared to be feeding mid-day or even at dusk.  Two hours of wading before sunrise for only four trout pretty much blew that theory out of the water. What on earth was I doing wrong?  When were these fish eating?  I knew we were on fish because they were popping slicks all around us. In a last ditch effort I met my clients the next day at 2:00 PM with plans of fishing on into the darkness. We caught a grand total of two trout during the daylight hours. As the sun dropped below the horizon and darkness fell upon us mullet became more and more active. We could smell the unmistakable aroma of trout slicks in the air. Trout could be heard popping the surface in what seemed like every direction. A hot pink Rapala Skitter Walk seemed to be the bait that the trout hated the most that night. Despite the smorgasbord of food in the area the high-pitched rattle drew plenty of angry strikes. The feeding frenzy only lasted about thirty minutes then we were once again standing in dead water. Crazy!

Timing is always important but sometimes there are miniscule details that can make a huge difference when the fishing gets tough. I can offer a perfect example of this from one of my recent trips. I was doing quite well hooking up with trout and an occasional red about every fifth or sixth cast. I had only one client with me that day and he happens to be a heck of a fisherman. He was throwing a different style of soft plastic than me and having zero luck. Our colors were very similar. His was a plum paddletail bait rigged on an eighth ounce leadhead and I was chunking a Purple Demon MirrOlure Lil John on an original Saltwater Assassin eighth ounce jig. He was determined to catch fish on his lure but he finally succumbed to the pressure and switched over to a Lil John.  Unfortunately for him, it didn’t help. Upon closer examination I noticed that his eighth ounce jig head was a different brand and appeared to weigh substantially less than mine. I ended up rigging him up exactly the same as me and he immediately started catching. I honestly can’t ever remember something so minor making such a major difference.

I’m convinced that the sink rate of the Lil John had a lot to do with our success especially after noticing dark green algae coming out of the specks and reds we were catching. For those who are not aware, the Lil John sinks more quickly than most paddletail style soft plastics due to its shape and density. We were drifting in about five feet of water over live oyster reef. This thick and gooey algae was growing on top of the shell. I’m not sure what, but the trout were obviously feeding on something down in that slimy muck. If we weren’t getting hung on shell occasionally then we weren’t getting bit.  When I look back on that day it seemed like a lot of information to digest at once but when it’s unfolding before your eyes the clues provide you with the answers.

Determining where the fish are in the water column is a key ingredient to having success, especially when chunking lures. We are in the time of year on the Upper Coast where there are billions of juvenile shad and glass minnows throughout our estuaries.  These tiny forage species tend to suspend in the water column. Trout and redfish are going to hang just beneath and then rise when it’s feeding time. We can always tell when this happens because shad tend to rise near the surface and “ball up.” They will get showered out of the water and we’ll see the silver flash of aggressive trout just below. I have a few favorite baits that I like to use while this is happening. If the trout are suspended, I want a lure that will hover right there in that same level of the water column. Twitchbaits such as Borboleta Lele’s and Hot Rods are fantastic choices, as are Texas Custom Double Ds and Rapala X-Rap SubWalks.

One important element that is not often discussed is the mental aspect of fishing. This is especially true when we’re talking about trying to fool trout using something other than natural bait. How many times have we witnessed one guy in the group who just can’t seem to get bit when everyone around him is lighting them up? It starts playing games with our minds. Once it gets in your head you start pressing, similar to a hitter who’s in a slump. We’ve all been there. The one glaring difference I’ve noticed in these situations is that the struggling angler tends to start working his lure too fast while trying to force a different outcome. When this happens one tends to lose their bearings, thus becoming blind to important details such as maybe a few flipping mullet, slicks, or nervous water that would greatly increase their odds of getting back into a groove. This is when it’s time to just slow down, take a deep breath and refocus. Also, maybe ask others in the group what they’re doing to get more bites. It’s like rebooting a computer.

We’re getting into the time of year where there will be quite a few easy catching days as water temperatures climb and fish begin to form tighter schools. They will feed more frequently and provide more visible signs. However, we will continue to have those challenging days when fish just won’t seem to cooperate regardless of what time of year it is. These are the times when being there at the right time during those narrow feeding windows and making the little adjustments can bail us out. The right time could be just before daybreak, during a high tide switching to a low or at the beginning of a major feeding period. Or, it could be in the middle of the day during a minor on a bottomed out tide getting ready to switch to incoming. The water may be off-color and dark colors may work better, or vice versa. Are the fish close to the bottom or near the surface? Where are you noticing the bait in the water column? Remember that jighead sizes and weights make a difference. You want your lure to look as natural as possible. Always try to cast a little cross-current and crosswind. Little things can make a huge difference sometimes.

Best of luck on the water and God Bless!