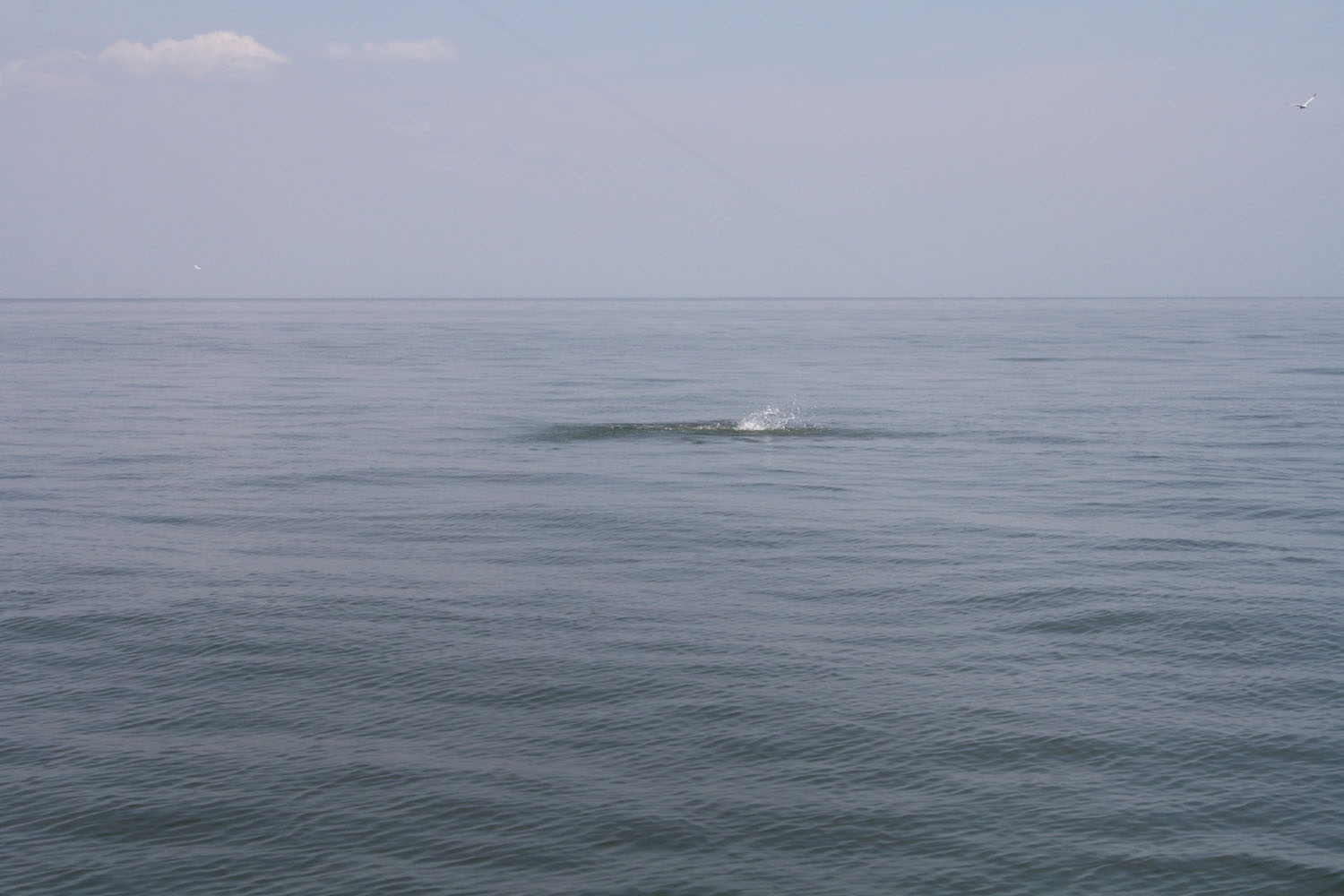 A late spring cold front blew through the area the night before our trip bringing gale force wind and high barometric pressure. It was still gusting to almost 30 knots when I rolled out of bed. Scott, Buzzy and I decided to wait until early afternoon to meet at the ramp. I knew there would be plenty of birds working with the outpouring of brown shrimp and the hourly forecast indicated the wind would be backing off around 1:00 PM.

It was still a bit breezy when we got started but it wouldn’t matter much working birds. As predicted, the wind continued to taper over the next couple of hours. After weeding through countless small trout and catching an adequate number of keepers we decided to pursue more mature specimens. It’s really difficult for me to get too excited these days about catching a bunch of pencil trout but, let’s face it, most folks enjoy a lot of bites. Sometimes, however, my clients are willing to follow my lead, especially if it means having a shot at a big trout. Such was the case with Scott and Buzzy.

By around 4:00 PM the wind had died completely. We found ourselves in a very rare situation where we were the only boat on the bay. Paradise in its most epic form. Entering an area where I’d had recent success for trout up to six pounds, the tide was slack and there wasn’t much activity. The sun and the moon were both headed toward the horizon and the incoming tide was due any minute. It wasn’t long before mullet and shad began appearing on the surface and several small slicks popped.

The three of us made cast after cast along the shell ledge with soft plastics but the only hook-ups came from jagged oyster clusters. By now the entire bay was a sheet of glass. We could no longer see the slicks but the smell of trout filled the early evening air. I decided to tie on a bone Spook Jr. to see if the subtle vibration and surface disturbance would draw a strike.

My fourth cast was met by the gentle slurp of a chunky three-pound trout. A few blow-ups later Scott had seen enough and switched to a MirrOlure She Pup. His first cast connected with a monster trout that would unfortunately find her way into thick shell. Rigging a new plug, he went on to land several solid specks. Buzzy, meanwhile, continued casting practice with his soft plastic. I asked him if he wanted to switch. “Well duh,” he replied.

Several casts later Buzzy’s pink Skitter Walk disappeared and his Waterloo Ultra Mag was loaded up with a near-eight-pound speck. After a few quick photos we watched her swim away, hopeful that she’d get tricked by another lucky fisherman when she’s 9- or 10-pounds.

Male trout drumming to call in females during spawning is a perfect example of the effectiveness of vibration. Sound travels very quickly through water. To put it in perspective – the speed of sound through water is approximately 3,315 mph – and only about 767 mph through the atmosphere. Temperature and pressure will cause speeds to vary but, you get the picture.

I’ve always believed that vibration is near the top of the list in a trout’s sensory pecking order. We’ve had many trips where surface plugs have drawn strikes when nothing else would. Even when blow-ups do not produce hook-ups we at least know they’re there, and then it’s up to us to figure out how to catch them.

I’ve had clients cast directly behind another’s blow-up and find success with plastics, waking baits and slow-sinkers. I’ve also seen guys attach “trailer jigs” to the rear eyelet of their topwater with a piece of fluoro leader. Topwaters sometimes provide the smoke – which leads us to the fire.

When it’s calm or there’s a slight surface ripple I like to throw small soft-pitch topwaters such as MirrOlure’s Top Dog Jr., Heddon’s Super Spook Jr., or even Strike Pro’s Hunchback. The Hunchback is technically a subsurface lure but floats to the surface when it’s not being retrieved. The erratic wiggle and rattle just beneath the surface is sometimes just enough to trick a stubborn trout when they won’t quite rise to a topwater.

It’s not always necessary to go small when it’s calm. The full-size Super Spook is anything but small, measuring 5-inches, but its rattle is softer than most other plugs of its size. Weighing a full ounce, the big Spook can be chunked a mile, handy when targeting skittish, shallow water trout. When casting, always feather the spool with your thumb as the lure is about to touch down. This creates a more subtle and natural “splash” as opposed to a bomb-like explosion that may spook your intended target.

My favorite medium-pitch topwaters are MirrOlure’s Top Dog and She Pup, Rapala’s Skitter Walk, and Heddon’s Super Spook One Knocker. While all of these seem to work well in just about any condition other than extreme chop, they really come into their own in moderate chop. I find myself chunking one of these four probably more than any other topwater plug. I suppose their frequent employment directly correlates with my high confidence.

The raucous clatter of MirrOlure’s She Dog places it in a category of its own and an excellent producer in choppy conditions and deep water. As with all topwaters, casting at about 45⁰ across the angle of the wind and waves is a better plan than straight downwind. Achieving a steady side-to-side cadence with occasional pauses is the textbook retrieve but any occasional erratic action combined with long pauses can be deadly. Allowing your plug to rest and rock atop the waves for several seconds can be as productive as any – the wave action does the work for you.

No different than any other lure, sticking with a retrieve that hasn’t been producing is a recipe for more of the same. Vary your speed and cadence until you find one that works. By the way, I always use a loop knot because I believe it allows for a more fluid and natural action compared to other knots.

There are thousands of colors but my top picks include bone, black, pink-chrome, blue-chrome and chartreuse-pearl. Black is my favorite in very low light conditions, off-colored water and at night, while all the other colors mentioned get plenty of playing time under the sun. Again, the confidence factor likely plays a role in my color decisions. Regardless, I firmly believe that pitch of the rattles and size take precedence over color.

Not Just for Breakfast Anymore –

Many believe that surface plugs are only effective during early morning and late evening. Some of the best topwater bites I’ve ever witnessed have been in the middle of the day, especially over deep shell.There’s no denying their effectiveness in low-light conditions but, other variables such as moon positioning (major and minor feeding periods) and tide movement influence the bite more than anything else in my opinion. There are also times when clarity has deteriorated to the point where soft plastics or other non-noisy baits will go unnoticed, but the clacking of a topwater will call them to the surface.

Soft plastics and other baits obviously catch plenty of fish but topwaters undeniably register higher on the adrenalin meter. Whether it’s a Houdini-like disappearing act, the summersault of a five-pound trout, or an explosion of Biblical proportions, nothing compares to seeing, hearing and feeling a trout’s reaction to a topwater.