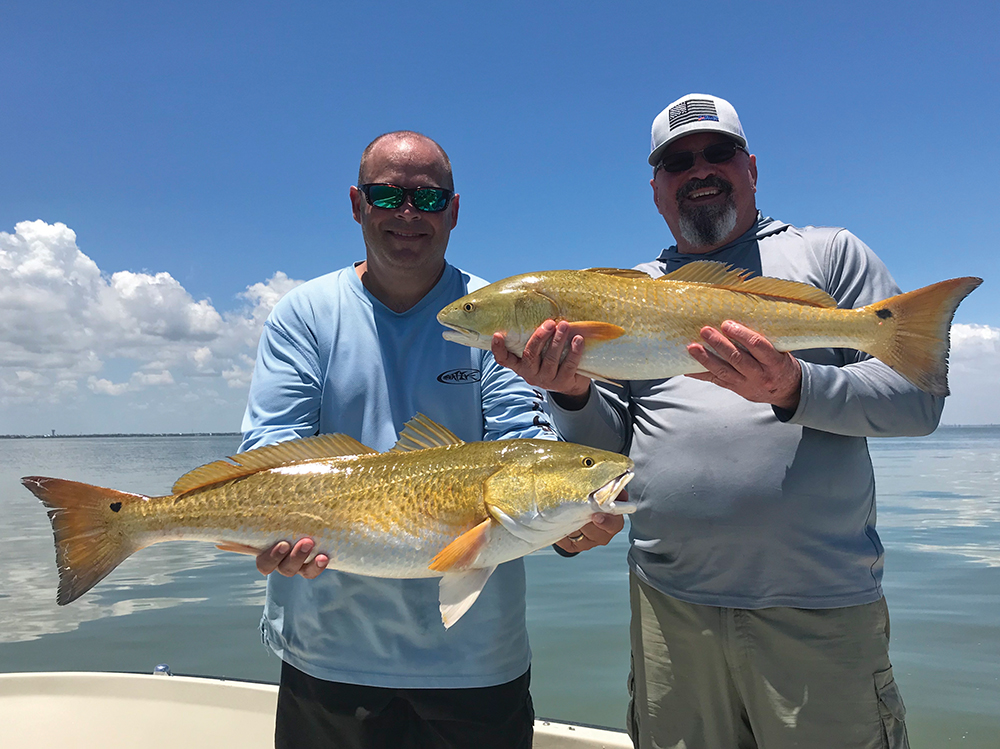 In all of my years fishing the Galveston Bay Complex, I would have to say that the summer months have historically been the easiest and most predictable. A typical late summer pattern on any given day would include finding a patch of good trout slicks, putting out the anchor and going to town on 17- to 22-inch fish with an occasional 24-plus incher. After a few hours of doing that we would go find open water schools of redfish and play with them for a while. If the wind was blowing too hard for the open bay schools then the back lake schools were just as plentiful. Fish (trout) would typically take up residence in their favorite locales (deep shell) and basically live there through September and even into early October. The onset of fall usually doesn’t really occur here until the first or second week of October and that is when the pattern would begin to change. It was fun. It was easy. We got spoiled.

This summer has been quite a different story. I’ve mentioned some of the reasons in previous articles (excessive freshwater, loss of oyster reefs, more fishing pressure, etc.). I’m not going to continue to beat that horse. Instead, I’d like to share some of the positive aspects of this summer’s experiences and talk a little about what I think the future holds.

Easy fishing often leads to complacency. Conversely, when things get tough we tend to put our thinking caps on and become super focused. This is when true learning takes place. If we know what signs to look for and we put it all together, our efforts are usually rewarded with not only a few fish but a broader understanding of what makes everything tick. As our knowledge base grows we not only become more confident but we understand what is within our control and what is not. At this point another element enters the equation – acceptance. We learn to accept what we cannot change and try to control what’s within our ability.

The margin for error during this “learning” stretch was microscopic on some days. If you weren’t where fish were during their brief feeding window throwing what they were willing to eat, you could come as close to a skunk as you ever have. There are many factors that had to be considered in the equation in order to avoid a skunk.

Spending almost every day on the water was necessary to not only find the fish (because they weren’t in their typical locations) but learn the timing of feeding periods.  Trout seemed to never be in the same place for more than a few days so you had to stay in superhero x-ray vision mode every minute on the water. Not having a heightened awareness level could mean you headed home with your tail tucked between your legs wondering if you still knew how to catch fish. Trust me. I’m speaking from experience.

Uncharacteristic of summer trout, often times this summer they simply would not produce slicks and this caused us to focus more on structure. As a result, I became a better structure fisherman. I found myself fishing more rocks, guts and shallow reefs than I probably ever have. The funny thing is that it worked – that is once I learned the bottom landscape and the techniques involved. It’s certainly not my favorite way to fish, but it got the job done.

There are two baits that seemed to work better than anything else. One was the MirrOlure Lil’ John and the other was Saltwater Assassin’s 4” Sea Shad. Color selection varied depending on water clarity but pink, purple, limetreuse and watermelon red glitter were definitely at the top of the list. I should also admit that I probably have more confidence in these two lures than any other, especially during the warmer months.  Just like with anything, there’s something to be said for confidence.

If we were drifting along rocks, the best method was to cast up against the rocks and let the bait free-fall down the ledges and then lift and drop like fishing for black bass with a plastic worm. Another effective retrieve was simply flat-lining (straight retrieving) at a medium to fast pace. This technique worked very well with both baits, not only while drifting parallel to rocks, but also while drifting over shell reefs. My belief is that the accelerated speed of the retrieve triggered a sense of urgency that caused reaction strikes. Furthermore, the vibration from the paddletail-style Sea Shad throws off sound waves that the trout can home in on.

I mentioned that there weren’t many slicks to lead us to the trout (until later into the summer). However, what we did witness were rafts of mullet. These rafts were encountered in only a few places in the bay, but in most cases they led us to the fish.  The rafts were almost always found blanketing shallow (2 to 4 feet) oyster reefs, sand bars, and drop-offs. The fact that we caught so many trout in shallower than usual water that late into the summer is another point of interest. The water temperatures remained below normal mainly because of excessive freshwater entering the bay. Otherwise, our fish would’ve been found in much deeper areas along the ship channel. As usual, tide changes provided the best bites. Knowing the effects and making adjustments saved days for us.

Salinities and water clarity have improved dramatically. The Lake Livingston dam is currently down to 4,000 cubic feet per second which is the lowest I’ve seen it in a year.  Many tide-runner trout as well as millions of small trout are holding in certain areas of our bay. When I say “small” trout I’m talking about 10- to 14-inchers. I had a trip the other day with just one client and the two of us caught nearly 100 specks before noon.  Only 16 were keepers but it was fun and lots of our bites came on topwaters. If these fish can stay within the system I would say the future looks bright. Effective September 1, 2019 spotted seatrout limits will drop to 5 per person from FM 457 in Sargent to the Texas/Louisiana border. This should certainly help improve the quality of our fishery for years to come.

My personal observations over the last several months lead me to believe that we’re going to experience a September that will more closely resemble a typical August.  Things just seem to be shaping up that way. The tough stretches have helped us become better fishermen and as conditions improve catching will become that much easier. Good times are ahead of us if everything falls into place. Either way, I will accept it for what it is, even if it means fishing structure.