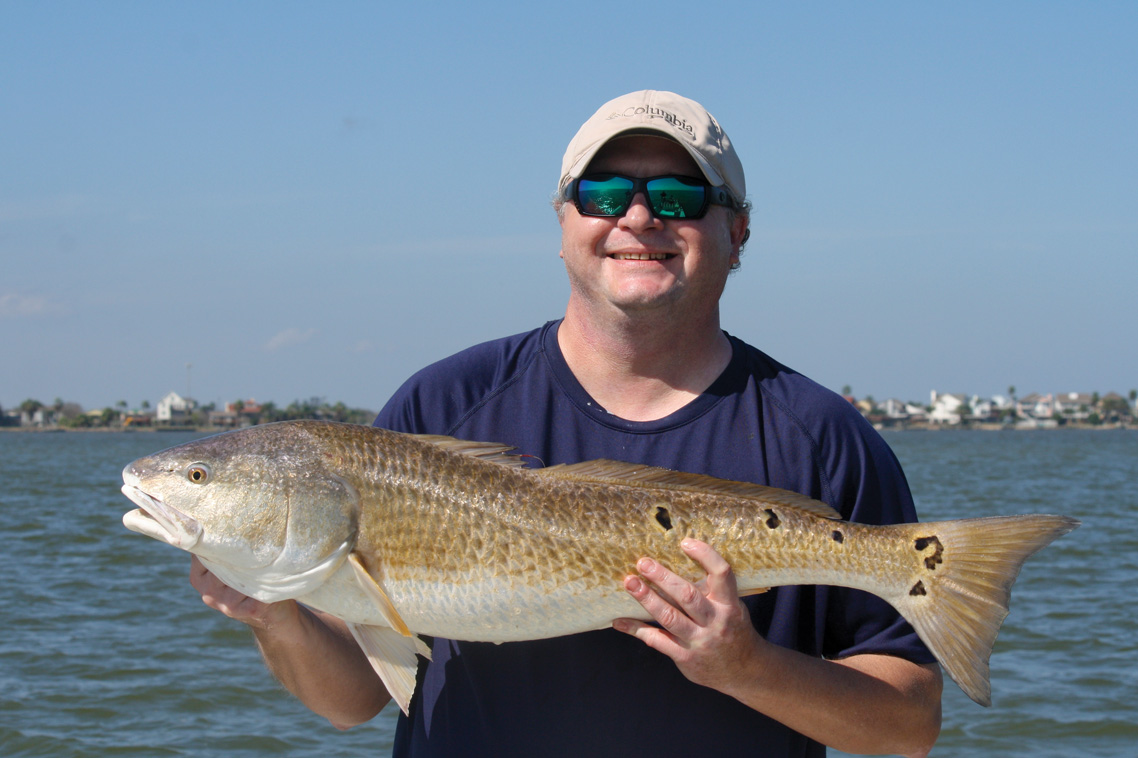 Mike Sheehan capped off an epic day of trout fishing with this beautiful red - CPR!

As my wife and I were driving to my daughter’s volleyball game the other day, traffic bottle-necked on Interstate 45 because of the road construction. The highway department was adding more lanes to accommodate higher volumes of traffic. It seems that construction can never catch up to human population growth. Eventually, a section of highway is completed and traffic flows better for a few years, until the process repeats itself.

Wouldn’t it be nice if we could increase the size of our bays to accommodate more fishermen?Unfortunately, managing the resources within our bays is not as simple as adding more lanes to make room for new generations of drivers. And, last time I checked there are no moratoriums, limited-entry or buy-back programs for recreational fishing licenses here in Texas. In other words, if you want to fish, you purchase a license and go fishing. If you decide you want to be a fishing guide, you register for the required courses, pass your tests, and buy a license. As participation increases so does the amount of pressure placed on the resource. Just like we can’t reduce the numbers of cars on our roads, we cannot tell someone they can’t buy a boat. No one in their right mind would ever want to deprive someone from going fishing. But, sooner or later, something has to give.

Many believe that we no longer have a healthy speckled trout population here in Galveston Bay because so many of them were harvested during the freshwater “stack ups” during summer 2015 and again in 2016. Others will say that it’s transition time (this article was written in March) and they’re just spread out and more difficult to catch right now. While both beliefs are no doubt true in part, there are many other variables to consider that are seldom discussed.

In 2008 Hurricane Ike blanketed about 50% of the live oyster reefs in the Galveston Bay Complex with a thick layer of silt as evidenced by side-scan sonar mapping conducted by the Texas Parks and Wildlife Department. Prolonged drought from 2010 to 2014 resulted in higher salinities bay-wide, sending large populations of trout and forage species searching for lower salinity near river mouths and other areas. Trout concentrated in such areas because that’s where their main food supplies had taken up residence.

As is usually the case, it didn’t take long for word of easy limits to circulate. Subsequently, the trout took a beating during this high-salinity induced “stack up” period that lasted the better part of five years. Not only were legal-sized trout caught and retained at a very high rate but, larval and other juvenile populations were negatively affected as they require lower salinity habitat for survival. Exceptionally high salinity levels also had a devastating effect on Galveston Bay’s remaining live oyster reefs, which are this bay system’s primary bottom-of-the-pyramid habitat. Predators such as Dermo (Perkinsus marinus), oyster drills (Stramonita haemastoma) and sponges also took their toll on the remaining reefs spared by Ike. Everyone talks about the freshwater induced “stack ups” which occurred during 2015 and 2016, but the high-salinity ones seem to have become a distant memory.

In my opinion, May is the first month when anglers can make accurate observations of the health of our Galveston Bay trout fishery. By then, what we refer to as the spring transition will have ended. As brown shrimp and other forage species continue to grow they’ll exit the brackish waters of marshes, bayous and rivers and migrate through the bay toward the Gulf. Trout and reds will begin forming actual schools in pursuit of them. With water temperatures holding in the upper-70s and low-80s fish will feed more frequently. Their increased activity will require increased food intake to sustain energy levels. This cycle will result in some of the most welcomed signs of the year to this point. Slicks caused by regurgitation and continued feeding will appear with regularity. Flocks of seagulls and terns will help lead the way to success as well. May is an excellent month to teach young anglers how to catch fish using lures for these reasons.

As trout take up residence over their favorite reefs and other structures, anglers will gravitate to such areas catching trout with success for a period of time determined by the number of anglers, the size of the structure and, of course, the size of the school. Some patches of live reef are relatively small and it may only take a few weeks before there are not enough trout remaining on that particular reef to justify the effort. Other trout will filter in but it’s typically not the same as it was initially. Obviously, conditions can also move the fish but it typically doesn’t take long for groups of fishermen to follow. You may be thinking, “Well, heck! Isn’t that how fishing is supposed to work?” My answer is yes, but when a bay system has almost twice as many anglers as it did a decade ago and roughly half as much habitat, the catching will diminish sooner. We witnessed this scenario last year.

Other areas further south have experienced periods of habitat loss and increased fishing pressure in the past. When Mother Nature causes negative impacts on a fishery then there must be an equal man-induced change to ensure sustainability. She doesn’t always make corrections for recovery as fast as we’d like. Shoal grass and other bottom grasses (more bottom-of-the-pyramid habitat) typically recover more quickly than oyster reefs. Without adequate substrate some areas will never experience oyster growth without man-made reef-restoration projects. And even then, assuming that TPWD receives grants every year to plant river rock and/or crushed limestone, we likely will not see Galveston Bay’s oyster reefs restored to pre-Ike levels in our lifetime.

More fishermen, roughly half the habitat, state-of-the-art technology in tackle and marine electronics, and let’s not forget social media, all contribute to the need for reducing the speckled trout limit to five fish. In addition, allowing an angler to retain one trout per day longer than 25-inches should be replaced with a tagging system similar to what we have for redfish. These would be steps in the right direction in the effort to present more opportunities for anglers to catch legitimate trophy-sized trout (28-inches and up). Saltwater guides should not be allowed to run multiple trips per day. A slot limit on spotted seatrout should also be considered. We have to find a way to manage our trout fishery for not only quantity of biomass but quality as well.

I spent about half of the past several months fishing a bay system that has a five-trout limit. For those of my clients who wanted to keep some fish they were more than happy only retaining only five. We released every trout over 23-inches. There were mornings when my groups had early limits. We would then search for big trout or redfish. Other times we would just catch and release a few more average-sized trout. Regardless, every client enjoyed the experience, as did I.

I’ve discussed this with guides from Matagorda to the Lower Laguna Madre who’ve indicated that their business hasn’t declined since trout limits were cut in half. As a matter of fact, some say their phones are ringing more.

I’ve also solicited opinions from some local guides here on Galveston Bay. The majority are solidly onboard with a limit reduction while a few are opposed. Those not receptive tend to be guiding only during the summer months when the availability of certain live baits greatly increase their chances of “filling the box.” Unless you fish more than 200 days, year around, it is my opinion that you cannot offer an honest assessment of how many trout we truly have in our bay system.

Another question I was asked recently, “What if TPWD never goes back to 10 trout?”To this I say, “So what?” It’s time for some changes to be made.