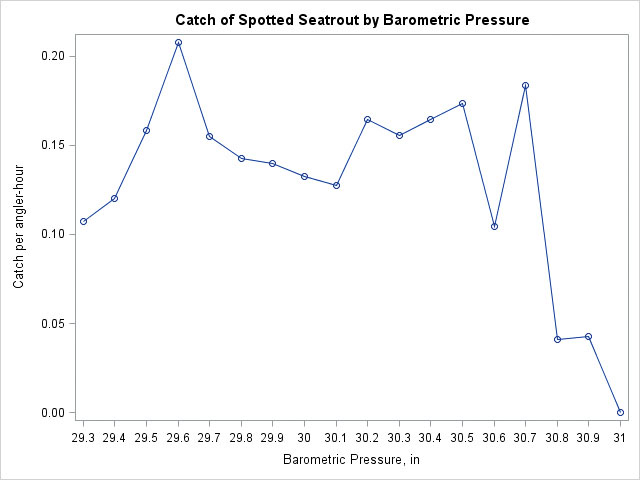 Source: Texas Parks & Wildlife Department creel surveys from May 1983 – May 1992

New clients arrived at the ramp ahead of me, eager to experience their first-ever guided fishing trip. Referred by another customer, they'd heard plenty about catching lots of fish, so the bar was set high. As we were pulling away from the dock one of them asked how long it would take to catch their limits (not one of my favorite questions, by the way). One of the other guys commented how it was a perfect day and we should just flat-out hammer them.

The pressure of putting clients on fish doesn't really faze me. Finding fish usually isn't all that challenging. Getting them to bite can be a different story some days, especially when we're dealing with a different kind of pressure. The pressure I'm referring to isn't measured by stress level or numbers of bites, but in inches of mercury (inHg) and millibars.

Barometric pressure is the pressure exerted by the weight of air in the atmosphere on the earth. In general, normal barometric pressure (also referred to as atmospheric pressure) in our region is around 30 inHg or 1016 mb (1 inch equals 33.864 millibars). The passage of weather systems directly influences pressure changes. Warm fronts, tropical systems and rain are normally associated with a drop in barometric pressure. The days following the passage of cold fronts typically result in increased pressure. An extreme low pressure would be around 950 mb (28.05 inHg). Such low readings would be associated with tropical storms or hurricanes. A very high pressure such as 1037 mb (30.62 inHg) could be experienced after the passage of cold front. We really like anything in the "normal" range or lower, but the luxury of picking those days doesn't exist so we have to make adjustments to increase our chances of success. Most experienced anglers in the speckled trout world have experienced a tough bite one time or another on a post-front day under clear blue skies. Those who haven't, I would venture to say, are not being truthful.

Intuitive fishermen want to know the reasons they're catching when they're catching and the reasons they're not when they're not. It's pretty easy to figure out when the catching is good, but the tough days sometimes leave us searching for answers. High pressure is frequently blamed this time of year, but do we really know why? Is high pressure really the spoiler or do other variables associated with cold fronts throw a wrench in our plans? I've heard many theories regarding high pressure. I've even read opinions saying that fish go shallow and feed better during high pressure situations. I strongly disagree as I believe that trout spend more time near the surface during low pressure events because their air bladder expands making them more buoyant. I spoke with Dr. Mark Fisher (Science Director of the Texas Parks and Wildlife Marine Lab in Rockport, Texas) and he offered his thoughts. "The pressure change associated with the passage of a front is equivalent to the pressure change a fish would experience by changing its water depth by just a few inches (i.e., 1 inch of barometric pressure = 1 foot of water). I suspect the change in temperature and wind speed and direction associated with the front have a greater effect than the change in pressure."

When winter fronts pass through they bring with them other factors that have an influence on the feeding habits of speckled trout. One would think that such variables would indeed have an impact. A prime example would be the tide not coming in like it was supposed to on a recent trip when post-front northwest winds kept it from doing so. Surface water temperature also dropped six degrees overnight. Water clarity was marginal at best because of the sudden wind shift. All of these factors definitely play a role in the feeding habits of trout and our ability to catch them. I've always believed that trout aren't as willing to feed when they're out of their comfort zone.

Another theory is that a rising barometer increases pressure on the air bladders of trout keeping them somewhat docile. This theory was dispelled by my many trips to Cape Cod while fishing for striper on high pressure blue bird days. Or was it? Could it be that striper have smaller air bladders than trout and are living in deeper water (50 80 feet)? If so, then it's not a fair comparison. Speckled trout have larger (in proportion to body density) air bladders than striper, king mackerel, Spanish mackerel and dolphin just to name a few and frequent shallower depths. Could it be that fish with smaller air bladders don't sense the pressure changes as dramatically and therefor their comfort/feeding level doesn't drastically change? The bottom line is that something changes that temporarily negatively affects the feeding patterns of trout during high pressure situations. Just take a look at this line graph back when the Texas Parks and Wildlife Coastal Fisheries Department was recording barometric pressure during their creel surveys.

"We recorded barometric pressure during every creel survey from May 1983-May 1992. Trout catch per angler-hour is reasonably constant when the barometric pressure is between 29.5 and 30.5, but it severely declines when the pressure is above 30.5. This is for private boat anglers, not guides. Keep In mind that, during this time period, there were two major freeze events and some regulation changes that also affected angler catch, but I believe this trend is pretty clear." Dr. Mark Fisher.

There's no doubt that high atmospheric pressure and/or the changes with which it is associated tend to suppress a trout's feeding habits. The data shows it and my own personal experience has proven it many times. So how can we still trick trout in high pressure situations? Regardless of the real reasons for lockjaw here are a few things that I've learned to do in such circumstances:

Fish a winter structure area (mud and shell) where there's deep water nearby and grind on it. The sudden change in pressure (and probably water temperature) often sends trout deep or at least near the edge of deep areas. Theories aside, this approach has worked for me many times.

No Surface Activity No Worries

Slicks and bait activity are often not visible the day after a cold front. This doesn't mean that the fish are not there. My clients and I observed swirling mullet (not jumping) on a recent trip when there was zero surface activity. There was plenty of bait in the area, but you would never have known it by surveying the surface from a distance. The mullet pretty much let us know the kind of docile mode the trout were in as well. Soft plastics on 1/16 ounce jig heads, Corkys and MirrOdine XL's were a perfect fit for the conditions as these baits were able to keep us in the strike zone long enough to entice more than a few solid trout. I asked Paul Brown a simple question years ago while standing in his garage where God only knows how many good fishing stories were told. "Mr. Brown, why will trout eat a Corky when often times they won't even touch another bait?" He smiled and said, "Well Steve, I guess it's kind of like someone who's on a diet but sees that Snickers bar on their desk that they've been looking at all day. Sooner or later, they're gonna eat that candy bar." That was the perfect answer.

Consider All Other Factors

While tide movement, solunar feeding periods, wind and water temperature are always important they become even more so after cold fronts pass through the area. Timing your wade or drift during what are sometimes small windows of opportunity can make all the difference. Refer to the solunar table in this magazine. Visit web sites like www.co-ops.nos.noaa.gov which provide real-time wind, air temperature and barometric pressure information for your area. A great site for detailed marine forecasts is www.wunderground.com.

Winter fishing with regards to frontal passages can be broken down into three simple phases Pre-front, during, and post-front. I would rank pre-frontal fishing as the best opportunity to enjoy a good and sometimes phenomenal bite, especially immediately leading up to when the frontal boundary arrives. This is the time in which trout seem to sense a change in pressure and other conditions thereby triggering a sense of urgency to feed. The second phase is during the front. Unfortunately, this is also when wind and weather can be the most treacherous. One of my best days ever was in East Matagorda Bay when we kept wading as the front pushed through. We caught and released more than a dozen trout heavier than six pounds and a couple just north of seven before getting beat into oblivion on the boat ride back to the harbor. The third and final one is post-front. This is when the action can really slow down, especially the day immediately following the cold front. I tend to think the gorging that took place the day before has quite a bit to do with the tough bite. Combine that with a sudden drop in water temperature which results in slower metabolism and catching can be like pulling teeth. This is when I will typically run afternoon trips to allow conditions (and trout) to stabilize. The third phase of the process may dominate for two or three days but the cycle will eventually repeat itself. Knowing the dynamics of each phase of the cycle and how to prepare will enable a higher success rate as opposed to using a blanket strategy as if we were fishing in a vacuum. Good luck out there and try not to let the pressure get to you!