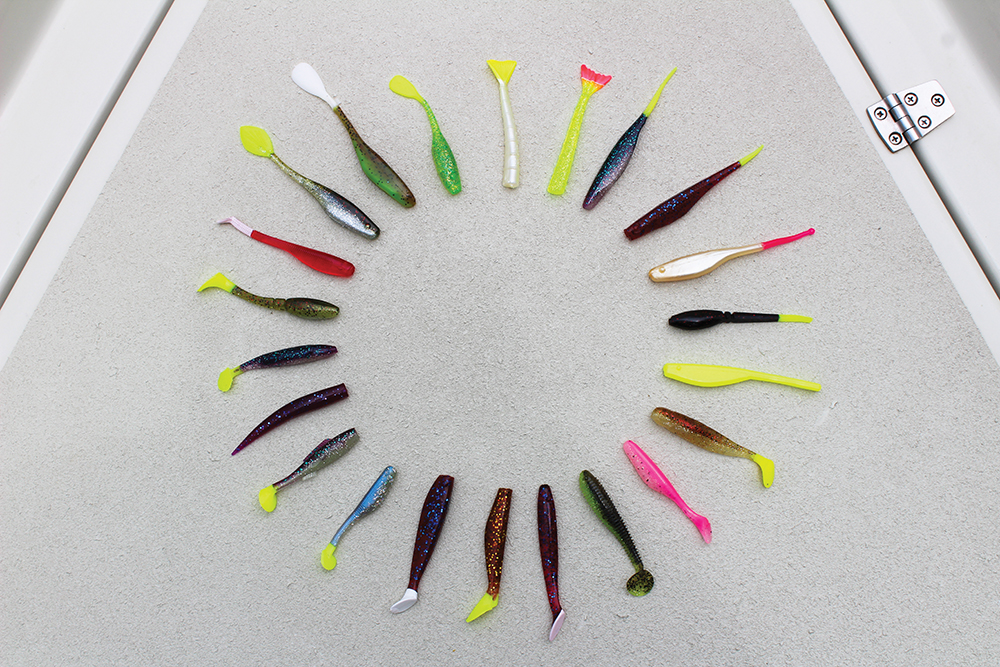 Years ago we called them touts. Nowadays we mostly call them worms and tails, some refer to them simply as jigs. Some of the freshwater guys call them flukes, a generic reference to the Zoom brand. Regardless the names we choose they have proven to be the time-tested bait for catching most of our fish year ‘round, year in and year out. There are many styles from which to choose and while everyone has their favorites, certain styles are better suited for certain situations.

For years we used shrimptails. The two I remember using the most were made by Kelley Wigglers and Paul Brown. A couple of other manufacturers of plastic shrimp imitators were Boone and Hogie. Kelley Wigglers was acquired by Wayne and Tina Davis in 2009 and in 2014 they re-branded as KWigglers. KWigglers, Boone Bait Company, Hogie Lures and others, continue to manufacture “touts” to this day. Each brand has their own subtle differences.

You don’t see as many anglers chunking shrimptails these days but they certainly still work. I had a customer catching as many as we were on Bass Assassins the other day. Back in the day we caught lots of trout and redfish on them while fishing tidelines, slicks, and gas well pads along the Ship Channel in fairly deep water. We usually rigged them on 3/8 gumball jigs as we were normally anchored and casting cross-current. Those heavy jigheads were necessary to get them to sink in the current. My three favorite colors were glow with chartreuse tail, strawberry with white tail, and root beer. We also caught many trout with them rigged beneath a Mansfield Mauler while drifting flats and spoils down at Port Mansfield. Shrimptails were also responsible for some of my best flounder trips here on Galveston Bay.

A straight-tail or rattail soft plastic is what we all threw for years once the shrimptail baits faded in popularity. Working this style of lure sometimes requires a bit of finesse. During spring I like to rig them on a very light jighead (1/16 ounce) where the hook shank comes out through the split or slot of the belly. Rigging in this fashion pretty much guarantees the bait will swim straight and not spin when retrieved. The lightweight jighead aids in keeping the lure in the strike zone longer. This can be very effective when trout are suspended and feeding on smaller juvenile forage such as shad and glass minnows. I like to point the tip of my rod toward the lure while I employ a moderate to fast up-and-down whipping action before letting the lure settle a bit. I will get into a steady cadence while occasionally lifting my rod tip. All of this is done with a medium-speed retrieve. The best rod I have found for this method is the soft-tipped Waterloo HP Lite.

While rattail style plastics don’t offer the vibration of some other baits, their wormy wiggling action can prove irresistible in certain situations. In contrast to using them for shallow water springtime applications, rattails also work very well for probing deep structure due to their rate of sinking through the water column being faster than other lure shapes. Anywhere from an 1/8 to 3/8-ounce jigheads may be used for this application.

I figured out a very long time ago that the paddletail soft plastics can be deadly when other styles tend to draw fewer bites. Often referred to as shad-body baits, they are basically swimbaits that simply require rigging on a jighead. A cast and reel technique is sometimes all that is required because the paddle-shaped tail alone can create enough vibration to entice a strike. These are great baits for kids and beginners because of this attribute. In my opinion, the more of a trout’s senses we can appeal to the better chance for success we’ll have. Besides, I’ve always ranked vibration above sight and smell when it comes to fooling most predator fish. In addition to their ease of operation, small paddletail baits are especially effective when we have to downsize to get strikes. There are days when the fish may be full because they fed the night before and they have zero interest in a big meal. But, they may chomp at the tiny morsel of a small paddletail.

I have to put this one in a category by itself because it’s different than any soft plastic I’ve ever seen.  When Mike Haring of Mainstream Marketing first sent me these odd-looking plastics from MirrOlure I was thinking, “What in the heck am I going to catch on something that looks like this?” It was a short, bullet-shaped soft plastic that seemed from its appearance that it wouldn’t have any action. Let me tell you guys something! This soft plastic twitchbait has revolutionized our industry. It casts farther than any soft plastic bait I’ve ever thrown and its erratic darting action is irresistible to just about everything that swims. The fact that it’s infused with a scientifically developed scent formula doesn’t hurt. The MirrOlure Lil’ John works great in shallow water, especially when rigged on a Bass Assassin Pro Elite Jighead – credit to Mickey Eastman and James Plaag – but it also works phenomenally well while working slicks and structure in deep water because of its rapid sink rate. One more attribute of this bait is that we can often catch 20 or 30 fish on one before it finally wears out.

There are several lure styles I would categorize as hybrids. Gambler’s Flapp’n Shad and Down South Lures are two that come to mind. Both manufacturers combine the vibration of a paddletail with the wiggle of a rattail.  Academy also has a bait called the H2O Xpress Thumpin’ Mullet which resembles the Gambler. The difference is that the Academy version has a glass rattle inside and the soft plastic it’s made of is a bit tougher than the Gambler. All three of these worms are very effective. It’s almost just a matter of preference at this point because these baits will suit just about every application.

Using soft plastics gives us greater versatility than almost any other type of lure. We can insert rattles into the bodies which can greatly increase our odds for tricking finicky trout, especially in off-colored water or low-light conditions. We can rig them weedless when dealing with heavy grass on the surface or bottom. Using an H&H Flutter Hook jighead or a Gamakatsu Superline weighted-shank wormhook allows the bait to hover horizontally in the strike zone, as opposed to the up-and-down action created when using a traditional lead head. Soft plastics can also be rigged beneath a variety of rattling corks.  The rattling and slurping noises created by reeling, jerking, and pausing, can sometimes entice trout when just about nothing else will. Unfortunately, I was able to witness this in East Matagorda Bay this past spring. We caught a measly handful of trout that day, but the folks employing the rattle cork method smoked them. The wind was uncharacteristically calm for March and there was little to no current.

As with anything we discuss in the fishing world there seems to be a million variables and this is certainly true when we talk about chunking worms. We have to pay attention to things like salinity, current, and wind to decide which style and weight of jighead to use. The higher the salinity the slower the sink rate.  Add strong current and/or wind to the equation and we’ll need to use an even heavier head. Are you using braided line? If so, your worm will sink slower than the guy fishing next to you who’s using monofilament. Certain colors work better in certain water conditions. What mood are the fish in? Do we need the erratic wiggle of a rattail or the pulsing vibration of a paddletail?

There have been some brilliant soft plastic lure makers through the years; the best of them are still here today and they’re providing us with the very best baits possible. Now all we have to do is figure out which one to throw.  Best of luck my friends!