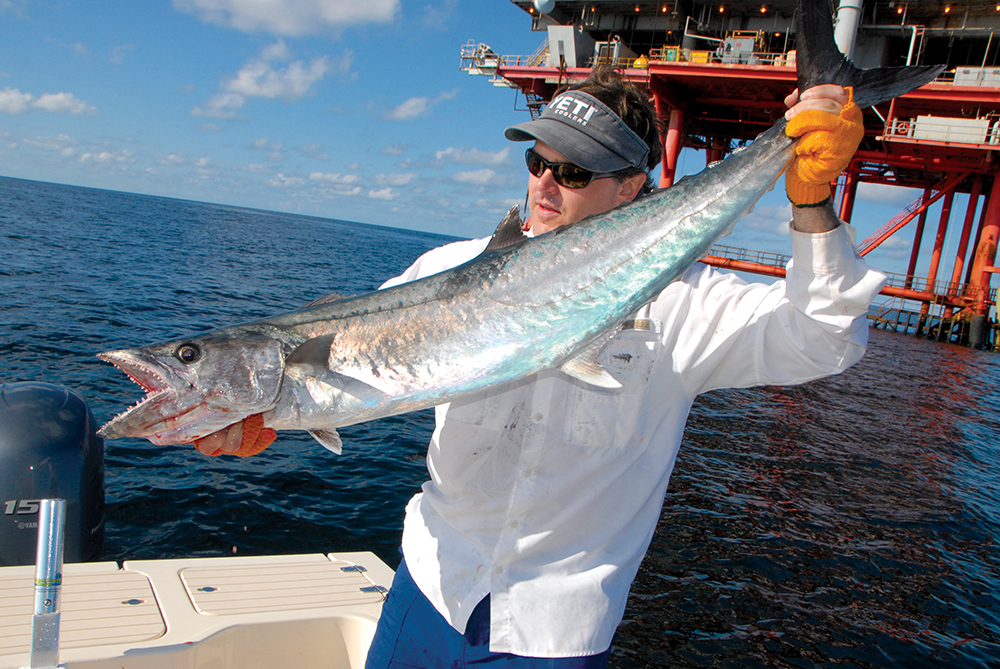 David Bullock with a feisty kingfish off Port Aransas.

Hooking kingfish on lighter tackle is serious business, because an angler must show real finesse and footwork in order to win. Once hooked up, you can’t freeze up with these fish; the ticket to success is keeping calm and collected. A frantic thumb on a reel’s spool will only get you burned, literally. That thin line must be kept clear of the boat’s hull, rub rails and propellers. If you’re almost out of line on a runaway fish, the boat must be cranked up and goosed in the right direction without knocking people down. The fish must be followed slowly enough, where the angler can put line back on the reel.

After years of grinding away on heavy tackle, we now enjoy great action on lighter tackle.

Two summers ago we ventured offshore of Port O’Connor when the Gulf finally grew calm and the mid-day sun stopped any inshore action. We scooted out to the platforms, even though we only carried 12-pound spin tackle. That gear is what we call trout tackle, used for bay, jetty and surf trips when throwing artificials.

The first platform we stopped at was fairly thick with kingfish up to 25 pounds. We had no wire leader, because we were supposed to be inshore where kingfish can be rare. We did have a spool of tough 40-pound fluorocarbon leader, but that was getting chomped. We’d toss out spoons on long casts, count to 10 or more, let them flutter deep before starting the retrieve. Boom! Our 7-foot, medium/heavy spin rods were soon bent like bananas.  In all, eight spoons were lost that afternoon, but it was worth it.

The day qualified for “ice cream conditions” and there were kingfish everywhere. There was no current so the boat just sat there, hardly moving, a handy 25 yards from structure. Each king was a serious battle, taking us four or five times around the boat. Fortunately, we were in a center console boat, so following these fish wasn’t difficult if you wore decent footwear. (Forget the cowboy boots, flip-flops or going barefoot.) Some battles felt like 20 minutes or so, pressuring each fish to the limit of 12-pound line. For some reason, none of these kings ran for the horizon, but instead stayed deep, shaking their heads, like they couldn’t believe a 3/4 ounce gold spoon caused so much trouble. Each tired fish was tailed into the boat, unhooked and released. It was quite a day.

It was a textbook example of some of the fun you can have while using lighter tackle offshore, marking 40 years of pitching jigs and spoons out there, while producing great memories. One of the highlights being a 38-pound king that Amy caught with a baitcaster reel on 20-pound line, during a small Port Arthur tournament in 1981. It was a fish powerful enough to take the 4-foot gaff away from me, though it remained in his side and was finally retrieved.

On other trips, we’ve slugged it out all day with kings using those great Ambassadeur 6500 reels and 20-pound line. One day we fished behind anchored shrimpboats with the late Capt. Howard Horton, and lost count of the kingfish dragged aboard, a real slugfest. Joe Doggett and Amy were on board and the three of us scrambled around the deck, fighting schoolie kings of 14-18 pounds, the typical size found behind summer’s shrimpboats. It was more action and line ripping off the reels than an entire summer back in the bays.

Back to our recent adventures with spin tackle: There are some fine, expensive reels these days built with numerous ball bearings, impervious to saltwater, that make for silky-smooth drags when fighting kingfish. But there are inexpensive models, as well. That day two summers ago, we were both using modest Shimano Sienna 4000 FE reels that cost only $35 or so. They’re great for inshore fishing and will last a few years, if you take care of them. It turns out they will also handle kingfish, if mistakes are avoided. Problem is, new reels are hard to find this year. A friend who owns a tackle store related from a Shimano salesman recently, who told him all their reels are pre-sold for the remainder of this year. And apparently the 4000FE model we used are now several years old, recently replaced by the 4000FG model). Regardless, it is the 4000-size spin reels made by different companies that are so multi-purpose, handling everything from bay trout to speedy kingfish.

When experimenting with lighter tackle, don’t forget that kings will also blast topwater plugs. When striking they will jump repeatedly, trying to catch that noisy plug. There is one caveat: hooking and fighting kings with a plug’s treble hooks is hard work, and removing such hooks from these fish is impractical, if you’re trying to release them quickly and safely. So, we removed the plug’s trebles out there, content to watch the surface boils and jumps. When a king latched on, he’d pull 20-30 yards of drag off the reel before turning the plug loose, whereby another king would grab on and repeat the process. I think our record was four kingfish on one cast. Those hard plastic plugs got thoroughly chewed up, completely fuzzy with hundreds of bite marks in an hour. Each time this happened, we were anchored in calm weather at an offshore “snapper rock” off Galveston in about 90 feet of water. Tossing chum overboard helped get those kings worked up. (If we’d been better prepared, we might have earlier switched the treble hooks to single, barbless hooks.)

It occurs that the same noisy topwater plugs should be tried at the ends of the Port Aransas and South Padre jetties in summer, when the water is blue/green. With stouter spin gear: Longer rods with 25-pound line on the reels. That would require serious footwork in the rocks, while wearing protective pants and gloves.

For many years, most offshore captains simply used the durable Penn Senator 4/0 reel with 40- or 50-pound line, a heavy outfit that will cover a range of mistakes while fighting these fish. I’ve used lots of that same gear on my own charters, taking strangers out in the Gulf, where we caught plenty of fish. But truth be told, most of those kingfish were outmatched by the tackle, and it wasn’t all that sporty. Most people were impressed by how hard these kingfish hit and run and it was all they could do to hang on. For some, just turning the reel’s handle was a challenge. It was something many of them were unfamiliar with.

It takes a few trips offshore and experience, to build enough confidence to switch to lighter tackle on the open Gulf.