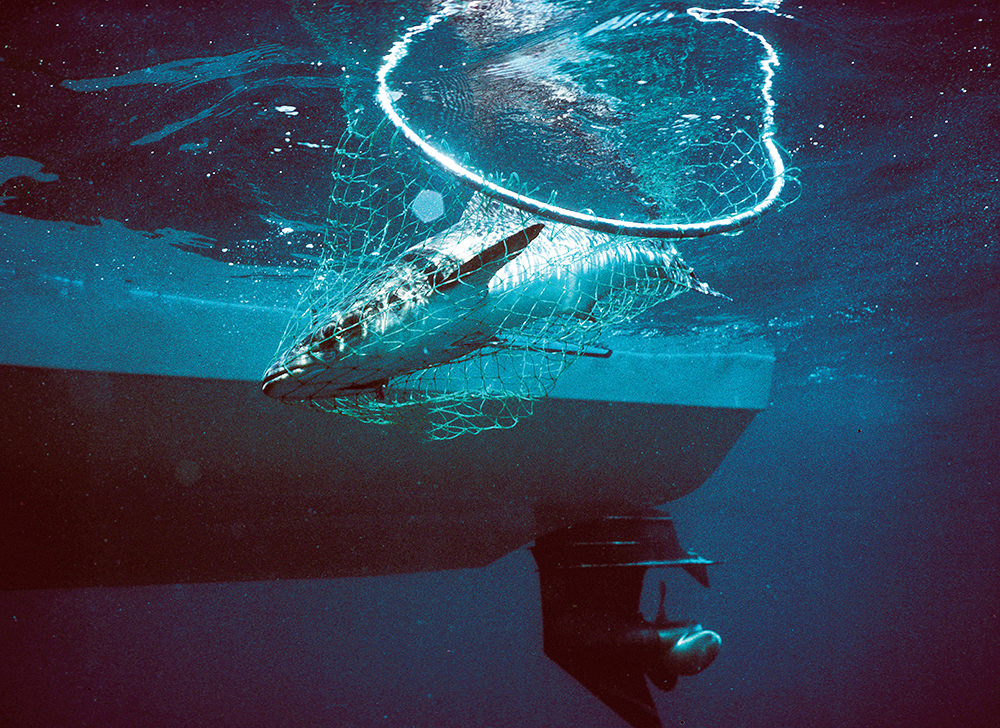 Cobia less than 34 inches scooped up with a net, before releasing.

Someone asked me about choosing a landing net, and I told them “it’s complicated.” Factors would include what you fish for, do you mind waving it in front of other boats, are you a guide or fish tournaments? What sort of fish are you after? Are you worried about landing every keeper fish, or just catch-and-release? Do you really need a net, or will your tackle swing fish into the boat or slide them onto a handy rock jetty? Are you wading, or way up high on a seawall or pier? More on that later.

I’m a guide and use a smaller, telescoping Frabill net and have for years. Sometimes the mesh will hang up on the little button arm extender, but that's okay. I want my net hidden from other boats, only extending the arm when we have a good fish on. It’s net the fish and skim it over the gunnel real quick, then fold and hide the net. I don't wave a huge net in the air and then do high-fives afterwards; that’s a sure way to attract attention that can stop the action. Other boats don't notice we're catching fish, and that's a good thing. We may forego the net entirely.

Last week we landed a double-header of upper-slot redfish during a slow day. Midway through the battle, we were startled to see another boat only 50 yards behind us. So, working those reds around our boat to the other side, we grabbed the 30-pound leaders and just eased them over the gunnel. I thought we’d been made, but to our amazement the other boat cranked up and idled away, disappearing. Someone pointed out later, that maybe the other boat returned next day. Or they're camped on my honeyhole right now...Which might be true, but that day at least they didn't potlick us, which means anchor close by and pummel my spot.

Some days you really do need a landing net, like when trout just keep falling off the hook. My wife Amy almost lost her cool, after I left the net at home and she had three, consecutive 20-inch trout dropped off the spoon when I grabbed the leader and tried to lift them aboard. Some days, the fish just nip at the lures, hit short and are barely hooked.

And there are the charter days, when you don’t want to lose a customer’s fish. Like the time I lifted a guy’s prized, good-sized pompano up by the leader and it fell off, bounced off the gunnel and was gone. Another day, this time ready with the net, a nice flounder dropped the hook at boatside but I dug elbow-deep underwater with the net, and somehow came up with the prize.

We never carried landing nets during our 15 years of walking the jetties; instead we became skilled at sliding hooked fish onto flat, wet rocks, often with the help of a timely wave. We were mobile and a long-handled net would have slowed us down. If we lost a few fish, there were always more. The same with catching bull redfish from the boat, no landing net required. Back then I used 200-pound Ande line for a leader, and we’d just take a wrap and yank those 40-inch beauties into the boat. Using 16/0 circle hooks, I don’t remember a single bull red ever getting loose at boatside, and we landed hundreds. Lip-hooked and easily released.

Offshore is generally gaff country, but I’ve seen a few landing nets out there. During one trip a friend had a big, rubberized landing net that came in handy when we ran into two schools of just-undersized ling. That rubber mesh didn’t tangle hooks much at all and each released ling swam away. While occasional boats still practice gaff and release, we also managed to land a lot of kingfish without a gaff. One needs quick reflexes to do so, and serious hand strength. Most kings could shake me loose on the first grab as we tried to bring ‘em aboard and unhook while they were still somewhat lively. In contrast, I’ve had several guys on the boat who could hand-grab a 30-pounder on the first try.

Landing nets that float are best, of course. Last year I spotted something shiny on the horizon, we were idling back in the boat 600 feet for another trout drift. It turned out to be a landing net, and I grabbed it, thinking wow, these nets are popular; there was only one other boat out here an hour ago. Same brand, looks like I now have two. Then I glanced around the boat and wondered, “Where’s my net?” It was my own, it had slipped off the low stern at some point. You have to watch equipment on those low-sided boats.

Not three days ago, a big landing net slid off the stern, of a big, rented pontoon boat for a family reunion. That boat was clumsy at making a quick U-turn and scooting back to save the net now upright and several inches underwater, it was sinking. Another lucky break, it was the marina’s loaner net and we’d barely saved it. Not sure what brand it was, but it was big and had green mesh. You would think they would all float. A cork or float attached to the handle would have helped.

There are a few offshore fish deserving of landing nets, but not many. Undersized ling, as mentioned. They grow up to 135 pounds and deserve special care. Tripletail are another candidate; they have a tough hide that can deflect a gaff. How else are you supposed to boat a prime 10- or 20-pound tripletail? If they’re a little short, it’s net and release. Big sheepshead are another spiky species that require a landing net. And you never know when and where a big flounder will show up.

There are two situations where I always bring a net: in bay tournaments, or with charter clients. With the latter, you don’t want to lose a prime fish at boatside, perhaps the biggest your client has ever caught; with paying customers, it’s best to avoid anger and despair. In tournaments, when the chips are down, you don’t want to derrick fish over the gunnel when a pulled hook might cost you a roll of Benjamins. Or even a few, for that matter.

There have been countless, comic stories about misadventures while landing fish. My favorite happened when Port Arthur friends on another boat brought a big tripletail alongside. However, they netted it tail-first and it wouldn’t quite fit in the landing net. Angler put down his rod, bent over and tried to pick up the net’s rim and scoop the fish, which appeared to weight about 15 pounds. With a pair of hands near its head, the tripletail bolted out of the net, soon taking the rod with it. Angler dove after the rod to no avail. Surfacing and sputtering without his favorite rod, there was screeching and harsh language, shocked silence from the crew that soon turned to laughter. Imagine doing that during a tournament, which would be worse. That at least is something I haven’t witnessed, because we were always very focused when a winning fish was brought alongside.

>If you don’t want to be noticed landing fish, go with a more-stealthy, telescoping net and use it sparingly.
>Most guides and tournament guys use a big landing net for good reason, they don’t want to lose a quality fish.
>Rubberized nets are best for releasing fish; the mesh doesn’t cut the tail or rub off fish slime.
>For jetties, seawalls, and piers, you will need a long handled net. I’ve seen them up to 15 feet long after being extended; they’re built for high seawalls and piers. Good for the jetties, too.
>For wading, a short-handled floating net works well. Without one, good luck grabbing that next big flounder.
>If you dip up a 30- or 40-pound black drum, don’t try to lever it into the boat, the aluminum arm will break every time. Point the handle straight up and lift gently.