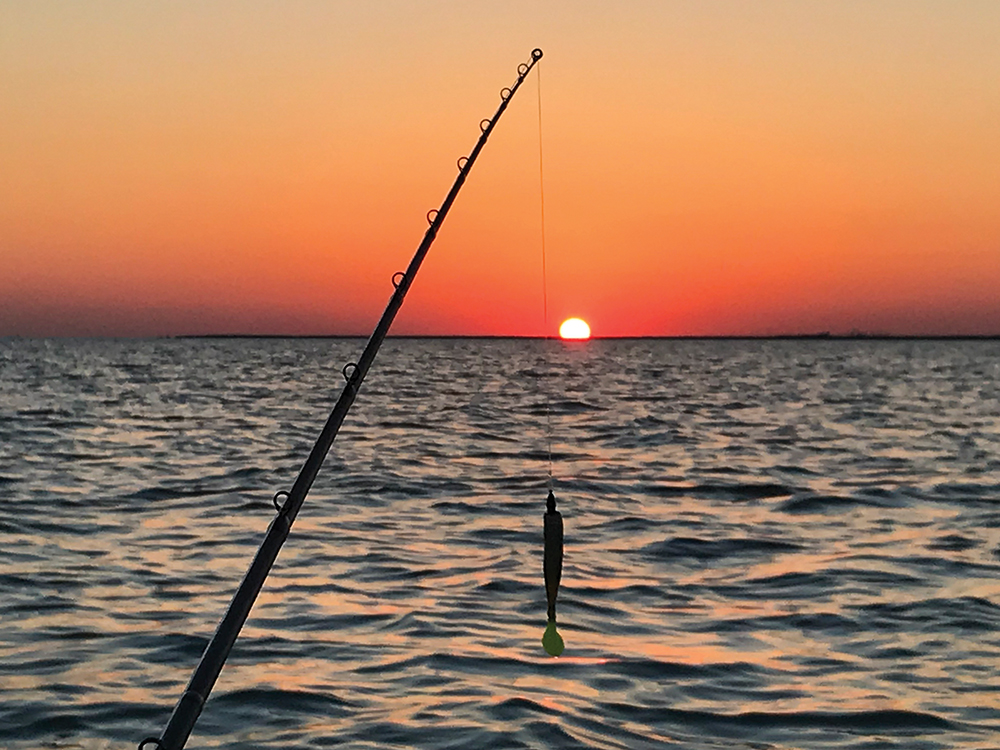 A sunrise start is a big part of getting on the right track.

Wow! I didn’t think the spring cold fronts were ever going to end but it’s beginning to look as though we’re finally in the clear. For weeks our trout have been bouncing back and forth with the passage of each late-season front. One day they’re on mud and the next day they’re on sand. The only pattern for a while was that there was no pattern. Everything seemed in limbo. It was difficult to string multiple days of good fishing together because of sudden water temperature changes, extreme tide swings, and wind from every point on the compass.

Finally, we’re entering one of the more consistent times of the year to catch fish here on the Upper Texas Coast. The trout won’t necessarily be putting up neon signs everyday but they’ll at least be giving us a few indicators even if they’re sometimes not so obvious. A small slick here or a surface-hopping shrimp there can give us the signs necessary to make our trip worth it if we pay attention.  Other days we’ll find groups of hula hoop sized slicks where trout will be jumping out of the water and catching will be a cakewalk. Either way, I’ll take it!

Good things are happening and we’re getting into that summer pattern that we all love. So, where do we start so we can get headed in the right direction for success? Well, we can never predict where the fish will be with 100% accuracy but stabilized water temperatures, established forage locations, and locally warmer water habitat will surely help us get on the right track.

The early part of June will most likely find us wading sandbars that taper off into troughs. These troughs (or guts) typically have slightly softer bottom than the sandbars themselves. On the calmer days we’ll catch most of our fish in the deepest parts of the guts, especially during low tide periods. On the windier days, and often when tides are above normal, shad and mullet will traverse along the edges where the sandbars and guts converge. Trout, reds and flounder will work those same edges for an easy meal. It’s not uncommon for us to catch fish on top of the bars during these conditions, especially if the wind and current cause mud streaks on top of the bars.

The areas mentioned can be especially productive when they’re located near passes, bayou mouths, and marsh drains. These seem to be areas where there are steady in-and-out flows of bait and subsequently, our target species. If I’m near a pass I prefer setting up on a low tide where I’m fishing as the tide changes and begins to flow in. My timing for bayou and marsh drains is a bit different in that I prefer starting at a peaked out high tide that’s switching to go out. It’s important to set up shop in these areas well before the tides are scheduled to flip.  This allows the waters around you to settle back to normal following your arrival and it puts you in a position to be locked and loaded when everything develops in front of you.

As water temperatures continue to climb throughout the month shoreline wading will give way to drifting open water oyster reefs. I’m certainly not suggesting that we won’t continue to catch fish wading shorelines. However, these may become more early morning target areas versus all day wades.

More and more shad will continue to fill our waters. We’ll see increases in shrimp and mullet populations and all of these aforementioned forage species will become larger in size. At the same time trout will become more active than they have been in months because of warmer water and increased metabolism. This will result in more frequent and more aggressive feeding periods. This is when reef fishing will begin to kick into gear!

Large concentrations of shad and mullet will be found over some of these open bay oyster reefs. Some of the reefs here in the Galveston Bay Complex are public and many are leased from the Texas General Land Office (GLO) by commercial oyster dealers. Since massive siltation of many public oyster reefs dating back to September 13, 2008 (Hurricane Ike) I’ve had more consistent success catching trout while drifting private oyster leases versus public ones.  The reason for this is because leaseholders routinely harvest and transplant oysters onto their leases. Live oysters attract more marine life than areas consisting of mostly dead shell (many of the public reefs). In addition, leaseholders are continuously planting cultch material onto their leases which promote new oyster growth. Substrate and live reef are two undeniable foundations contributing to the health of our fishery.

Just like every stretch of shoreline has its sweet spots, every reef has theirs.  High spots in reefs and areas of live oysters will attract more fish than flat areas.  A lot of times the slicks and bait concentrations will show us the high spots and the live oyster areas. Not unlike sandbars, certain characteristics of oyster reefs tend to change over time. Swift back-and-forth currents can change reef edges and high points over time. In addition to natural changes, swells from ship traffic will cause contour changes and even shave down humps. The continuous harvesting and transplanting of oysters by oyster boats cause reef bottom landscapes to change as well.

I pay close attention to areas of the reefs in which oyster boats are working and what they’re doing. When I see them dumping live oysters onto an area of their lease I mark it on my GPS. Often times we’ll start catching fish there within a week. If they’re dumping shell or rock for reef restoration purposes I’ll also punch in the numbers but with the understanding that those areas may not produce fish for months down the road.

We’ll also find trout, redfish and flounder along rock groins throughout the bays and along the jetties as we get into mid to late June. Similar to reefs, these structures provide habitat for smaller marine organisms which in turn attract the fish we’re targeting. Rafts of mullet travel tight to the rocks pointing us in the right direction as do pods of shad.

With regards to preferred lures, MirrOlure Lil Johns and Saltwater Assassin Sea Shads provide probably more bites than any other baits this time of year. There are added advantages to chunking these soft plastics in that we can cover more water and change jighead weights to adjust for different water depths. As a general rule, we’ll use 1/16 ounce lead heads when wading and 1/8 ounce when drifting. When anchoring in deeper water (8 feet and deeper) or when there’s a lot of current we will rig soft plastics on 1/4 ounce heads.

Topwaters such as MirrOlure Top Dogs, Rapala Skitter Walks and Heddon Super Spook One Knockers are among my favorites when the conditions are right. The right conditions would be seeing active bait on the surface, slicks or birds hovering over fleeing shrimp, just to name a few. There are also times when we’ll use topwaters as indicator baits or fish finders. If I’m in an area where we’ve been catching but we’re not getting bites I may throw a surface plug just to see if I can draw an agitation strike or two. This may tell me to stay in the area and wait for them to feed.

We will find success over the course of this month by following the progressions of the fish triggered mainly by water temperature changes and bait migrations.  This is an excellent time of year to use the senses God gave us. There’s nothing like seeing and hearing a group of seagulls squawking and fighting over shrimp getting blown into the air by feeding trout and reds. And one of my favorite smells on the planet is the smell of fresh trout slicks! Paying attention to tides, solunar feeding times and all of the signs that cooperative summer trout provide will get us on the right track. Best of luck to everyone!