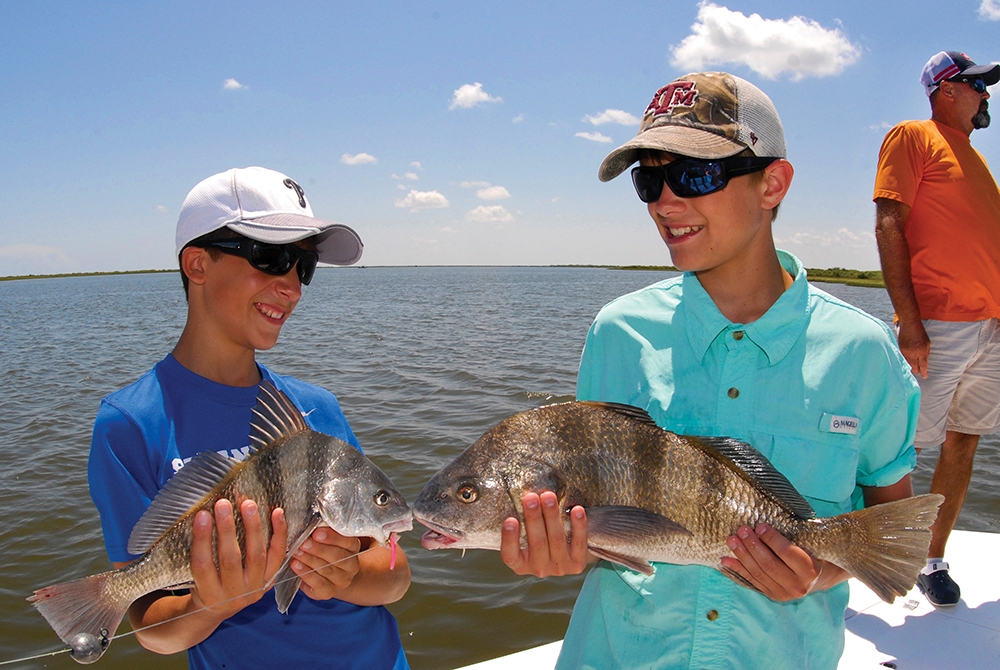 Happy anglers with scrappy black drum. Behind them is the multi-species guide Capt. Curtiss Cash of POC, who’s watching a shallow school of drum.

Our trout population took a hit during the freeze back in February, and at this writing the damage survey wasn’t complete. Many trout hadn’t begun to float, where they could be counted, but it certainly looks like the middle and lower coast took a major hit and many of them trout. Tons of baitfish, too. On the upper coast, fish have more access to deep, protective ship channels with warmer water, though what impact a lumbering ship might have on fish hiding in these 50-foot channels is hard to measure. Galveston, Matagorda and Corpus Christi Bays also have their ship channels leading to the warm Gulf, which saved a lot of fish.

Our saltwater hatcheries apparently did okay and were posting video of feeding their flounder on the last day of the freeze, so I assume they never lost power—which happened in the 1989 freeze in Flower Bluff.

Shallow East Matagorda Bay and bays south of Port O’Connor down to Port Isabel had no protection from the cold, save for the Colorado River and the ship channel in Corpus Christi. The 12-foot ICW offered scant protection from the cruel weather, and eyewitnesses said barge traffic wasn’t really shut down, because it was only voluntary. Tugboats have big propellers that really churn that canal from top to bottom, which is fatal to cold-stunned fish.

Anyway, I’m offering up some alternatives for this year’s coastal fishing. This is a good year to give the trout a rest, or release those caught while using barbless hooks. The big trout tournaments can be skipped as well, since an 8-pound trout can lay almost a million eggs annually. (They’re batch spawners that lay continuously over a few months time). I don’t have stats on the number of saltwater anglers back in 1989 when we had our last big freeze, but today’s numbers are certainly higher. Rebuilding our trout population should now take priority.

Here are some other alternate bay species to pursue, most of which taste better than trout. The public and a number of coastal guides have concentrated on trout for many years, hardly learning how to fish for other species. Some are completely dependent on using live croakers for bait. They cater to what the public wants, and the name “trout” has universal appeal; everyone knows seatrout are good to eat (if a little bland), and easy to clean. But Texas has many species of fish, and it’s time to learn more about catching them. If enough people learn, it could help ease fishing pressure on trout for the years ahead.  If you book a guide this summer, you might inquire about targeting other species. Those fishing the jetties certainly encounter a wider variety of fish than in the back bays. Here are some favorite fish:

Spanish mackerel arrive in April, are plentiful in May, lasting into November. They’re my favorite coastal fish without having to venture offshore.  They were not impacted by the freeze, because they were wintering in Mexico and South Florida. Buy a handful of ¾ ounce gold spoons, find green water near the beach, and start slinging. Use 40-pound mono of fluro leader tied directly to your line. Any of the jetties are reliable spots, if the water is green. Near-shore platforms off the beach are even better, and we’ve even accessed them with jonboats launched in fairly calm surf. The daily bag limit of 15 mackerel is quite generous. Fillet a 3- or 4-pounder, drizzle melted butter on the meat side, sprinkle with Tony’s spice, bake but don’t overcook, and that’s a meal that beats any coastal trout.

Sheepshead only eat crustaceans like crabs, shrimp, small oysters and barnacles, but that really helps their flavor. These fish are picky in summer after spawning in February/March. Use fiddler crabs or live shrimp with a small J-hook. That, or jump in the water with a pole spear and poke a few of these striped bandits; all it requires is a mask, snorkel and fins at the jetties. They’re easy targets and not very smart. Or, they’re startled to see someone aiming a spear at them. Either way, I used to fill Igloos at the Galveston jetties during summer, before there were limits. Today’s limit is a tight 5-fish per angler, but that’s enough for several fine meals, if you aim for the bigger fish. I’ve only eaten them fried, but they were better than trout. As for bigger sheepshead, I heard of one family who targeted them at night at oil rigs within sight of the beach. Which is a little extreme, because every Texas jetty has sheepshead. That family was tournament fishing for a 10-pounder.

Redfish are tougher than trout and it’s highly doubtful they suffered losses like trout did. Reds have a varied diet and are tougher to clean than trout, but they’re bigger and fight harder. And the state’s hatcheries have been pumping red fingerlings into the bays for decades. I do remember POC redfish were hard to find after the twin 1989 freezes, except lots of them around oil rigs off the beach that following summer, where many escaped to and just wouldn’t leave. That’s an easy way to catch slot reds, dropping circle hooks to the bottom with cut bait. And here’s a tip before cleaning them: Lately, we’ve been bleeding our redfish while they’re alive. On a stringer or in a 5-gallon bucket of water, cut just one red gill raker, and leave them in the water. After 10 minutes, the redfish is asleep forever, and the bucket water has turned completely red. It seems to improve their flavor, as it certainly does with chicken or beef.

Golden Croaker. Not the most glamorous fish, but two generations of Texas anglers have forgotten about the autumn “croaker runs” of yesteryear and how tasty was the croaker. It didn’t help that the croaker population was crippled by Gulf shrimpboat bycatch, with a billion of these fish landed on deck and wasted every year, dumped overboard. Keeper croaker are caught on bottom in depths of 20 feet or so. The biggest lurk offshore in autumn and winter at artificial reefs. A 6-pounder caught at the snapper banks of South Padre is the state record. Nobody will argue that fried croaker aren’t great!

Black Drum. Forget eating big drum, they’re inedible, but they can be sporty on 20-pound tackle. However, smaller “puppy drum” taste pretty close to redfish. The only people I’ve seen consistently hauling out limits of puppies are at the POC jetties, where guides anchor right where the rocks meet the sand in depths of about 30 feet. They use egg weights and mono leaders only 4 inches long, which keeps that shrimp bait right on the bottom. Schools of puppy drum are also found in the back bays, around oyster reefs. Baffin Bay carries a large population of drum, though I hear they suffered losses in the freeze.

Flounder. These fish should have had a great spawn this past winter, because they favor colder water just offshore. (In short supply in recent years). To target them, slow-dragging the bottom with live finger mullet or marsh minnows around structure is the ticket. Or slow-bouncing Gulp! jigs. In recent years I’ve been filleting these fish into four strips of white meat, instead of baking them whole, and it was better than fried crappie from the lakes.

There are also bonus fish, real prizes on the table. Tripletail arrive in June, are often visible on the surface while sunning themselves, and they can be quietly stalked with an electric motor. Pitch them a small, live bait or a twister-tail worm jig. Bag limit is three. The state record is 36-pound brute from Matagorda Bay.

Pompano roam the Padre Island surf, but also cluster inside oil rigs offshore in 30 to 50 feet of water, especially in May and October. You need small but strong jigs, tipped with shrimp, and pitch them around the structure when the current is almost still. In a current, they stay inside the structure, making them difficult to reach unless you’re above them on the catwalk, first spotting and then doodle-socking the jig. (A technique I gave up on, when I turned 50 or so). In the Padre Island surf the long rod is king, up to 15 feet long, capable of making long casts. Pompano disdain muddy water, so look for a green, incoming tide.