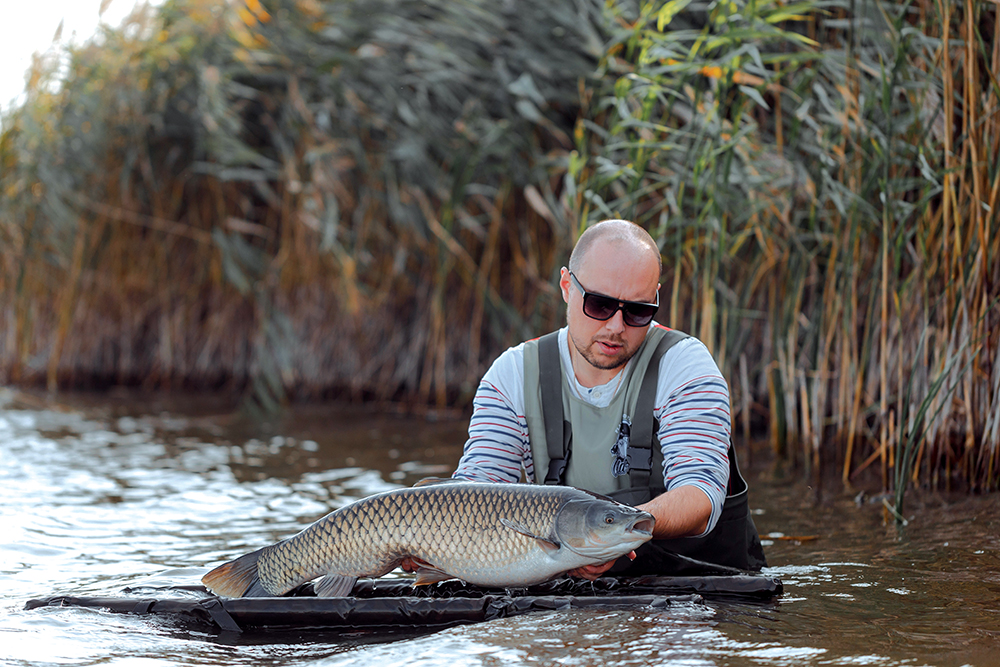 Photo by Eugene Angoluk (aka Thirdman) from Pexels.

The grass carp, Ctenopharyngodon idella, is one of the largest members of the minnow family, regularly reaching between 65 to 80 pounds and 4 feet in length. The rod-and-reel record in Texas stands at 53.5 pounds, 49 inches (2006). The current IGFA All Tackle Record is just over 87 pounds. Their coloration is olivaceous to silvery with white bellies, lacking the golden hue of the common carp, and they have a round, torpedo-shaped body. The mullet-shaped head, terminal mouth without barbels, and coarse dark edged scales are distinctive identifying features of the grass carp. They also sport a scaleless head, short dorsal fin, large, dark tail, and are one of only two minnow species with spines in their fins (the other is the common carp). The genus and species names describe, quite literally, the grassy’s distinct comblike pharyngeal teeth.

Also known as white amur, grass carp are native to the Amur River system in China and Eastern Siberia, but have been cultured nearly worldwide, both for food and as a measure for aquatic weed control. Though they primarily inhabit fresh water, the species shows a high tolerance for salinity and has been known to survive for several days in water up to three times as salty as sea water. Grassies are found widely scattered in the Canadian, Red, Sabine, Trinity, and Rio Grande basins, and they are known to reproduce in the Trinity River-Galveston Bay area. They are capable of extensive migrations in open systems, but generally only travel during spawning season.

Newly hatched grass carp feed on benthic invertebrates and zooplankton but switch almost entirely to an herbivorous diet by the time they’re three inches in length. In the absence of aquatic vegetation, grass carp have been reported to consume organic detritus, insects, small fish, earthworms, and other invertebrates. They use their pharyngeal teeth to grind vegetation, preferring a diet of submerged plants with soft leaves. Their feeding habits have made them highly desirable as vegetation control agents, as they are capable of consuming three times their body weight per day in plant material.

Spawning typically occurs in the spring when water temperatures reach above 59°F. Once an appropriate water temperature is reached, spawning seems to be initiated after a sudden rise in water level, usually after heavy rains. Spawning areas usually have high water velocity and turbid water, such as at the confluence of rivers or below dams, as the eggs are semi-pelagic and must remain suspended during the 20- to 30-hour incubation period. Thus, successful reproduction requires long stretches of warm, flowing water and suitable backwater habitats for larval development. In the Trinity River, spawning occurs from April to July. Females produce, on average, 1 million eggs per year, which they release by the hundreds of thousands in broadcast spawning events. During these events, males generally outnumber females by about 2 to 1. Grassies typically swim into the strongest current, where courting/chasing occurs. Males butt their heads against the belly of a female, stimulating the simultaneous release of eggs and milt. Young grass carp grow rapidly, reaching over 2 pounds in the first year, and growing 4.5-6.5 pounds per year in temperate climates (10 pounds/year in tropical climates). Age at sexual maturity ranges widely, from 2-10 years (19-34 inches), and is largely a function of water temperature and diet, with males generally maturing a bit earlier than females. Their lifespan is about 5-11 years in the wild, though one specimen found in North Dakota was over 33 years.

Grass carp culture began in the southern part of China, along the Yangtze and Pearl Rivers. Common carp was actually the preferred species for culture, but during the Tang Dynasty (618-904 A.D.), the family name of the emperor happened to be pronounced the same (in Chinese) as “common carp,” so the killing and sale of common carp was outlawed. Grass carp were one of the chosen substitutes – along with silver carp, bighead, and black carp – as their fertilized eggs were easily harvested from the rivers. Since then, the fish has been introduced to more than 40 other countries. Global production of farmed grass carp topped 3 million tons in 1999.

In 1963, through a joint action between the United Nations Food & Agriculture Organization, the US Fish & Wildlife Service, and Auburn University, grass carp were brought into the US to evaluate their use as a biological control for aquatic vegetation. The original fish were housed at two facilities: the USFWS Fish Farming Experiment Station in Stuttgart, Arkansas, and Auburn University, Alabama. Both stocks reached sexual maturity, and spawned, in 1966. Some of the offspring from the Stuttgart station escaped, possibly by passing through screens on rearing troughs.

The Arkansas Game & Fish Commission (AGFC) first stocked Lake Greenlee, a topographically isolated lake, in 1969. Feral grass carp were collected in the White River (Arkansas) in 1970, and in the Illinois portion of the Mississippi River in 1971. Age determination indicated the fish were from the 1966 year class, escapees from the USFWS facility in Stuttgart. Also in 1971, the AGFC stocked Lake Conway, the first reservoir open to a stream system. By 1972, grass carp had been introduced into 40 states. By 1974, grass carp began to appear more frequently in the Mississippi River, along with the rivers of Alabama, Florida, Georgia, and Mississippi.

By the late 1970s, there was growing concern over the grass carp’s potential to reproduce in river systems in the US, and many states banned the importation of diploid (fertile) grass carp. Private hatcheries began developing hybrid, sterile, and mono-sex stocks in an attempt to create environmentally safe grass carp. One experiment produced a hybridization with the common carp (Cyprinus carpio), but the resulting hybrids were still fertile. In 1983, a private fish hatchery in Arkansas produced the first triploid (sterile) grass carp on a commercially viable scale. Fertilized eggs are shocked with hot or cold water, or with pressure, causing them to retain an extra set of chromosomes – hence the term “triploid” carp, because they have three sets of chromosomes instead of the normal set of two. The aquatic weed control capabilities of the non-reproductive triploid grass carp appeared to be essentially the same as the naturally reproducing diploid carp. Triploid grass carp are functionally sterile. Females have greatly reduced ovaries. Triploid males still produce sperm, but they produce very low viable numbers – only about 60 viable spermatids for every billion cells. Even artificial insemination into normal eggs from diploid females produced no viable larvae. The odds of triploid grass carp successfully reproducing is only even possible in populations where triploid males can spawn with diploid females, and it’s still very low. Though some might argue that “life, uh, finds a way…”

In 1985, the USFWS established a triploid grass carp ploidy inspection program. Because creation of triploidy stock is less than 100% effective, all the fish in each batch need to be individually tested for ploidy determination, and the diploid fish removed. The effectiveness of triploidy is, therefore, dependent upon the quality and integrity of the inspection and certification processes that screen the fish.

Grass carp are stocked to alter “undesirable” habitats by consuming nuisance aquatic vegetation, but in some ecosystems, they can negatively impact aquatic plants and invertebrate foods that provide beneficial habitat for desired species. For example, in Lake Conroe (Texas), stocking of this species and the resultant loss of vegetation altered the invertebrate and fish communities. Grassies are explosive breeders and insatiable feeders, often out-competing indigenous species. In addition, they only digest about half of the plant material they consume each day. The rest is expelled into the water as waste, which can lead to an increase in nutrients with subsequent algal blooms, which in turn can lower the water clarity and dissolved oxygen content. Currently, only triploid grass carp are legal for use in Texas, and a permit is required to obtain them. An angler who retains a grass carp caught in public water must immediately remove the intestines, except in waters where a valid Triploid Grass Carp Permit is in effect. In those waters, any grass carp caught must be immediately returned to the water unharmed.

The herbivorous feeding habits of this species make it challenging to catch, but they do tend to cruise high in the water column, making them easy targets with a bow. While grassies might be reluctant to bite, once hooked, they’re reported to be a strong fish that puts up a tenacious fight and are known to jump. Once landed, they’re supposedly easy to clean, yield a large amount of usable flesh, and are excellent table fare – steamed, pan-fried, broiled, or baked.

Where I learned about grass carp, and you can too!