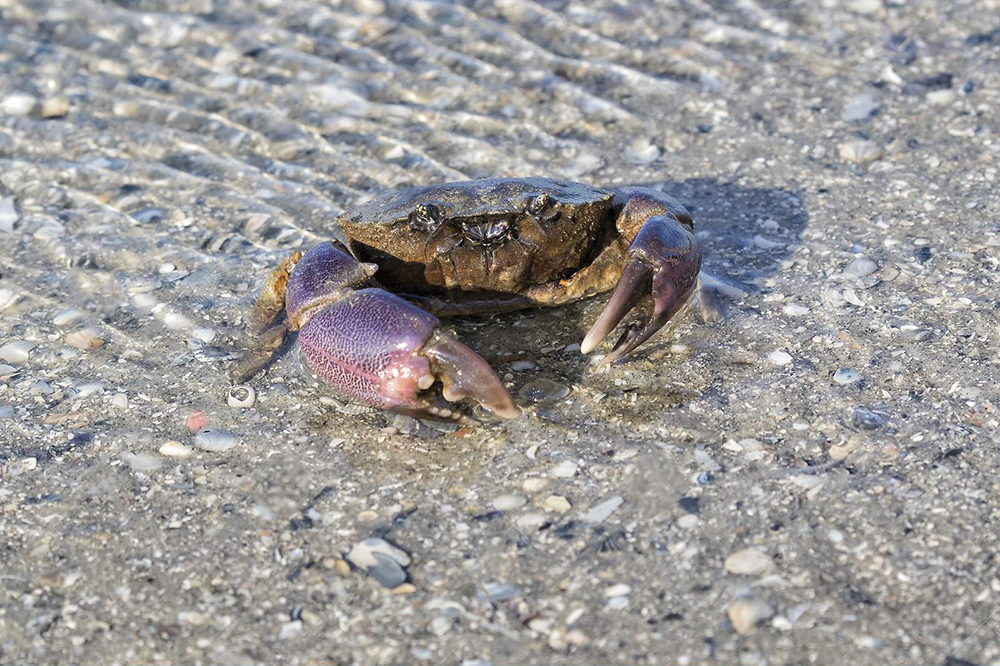 The species of stone crab local to the Texas coast is the Gulf stone crab, Menippe adina. It is very closely related to the Florida stone crab, Menippe mercenaria, but smaller, and with some color differences. The Gulf stone crab has a dark brownish red carapace, compared to the tan or gray color of the Florida stone crab, and it doesn’t have bands or stripes around its legs like the Florida stone crab. Hybridization occurs where the ranges of the two species overlap off the northwest coast of Florida. The Gulf stone’s carapace is 3 to 3.5 inches long and about 4 inches wide. A large crab claw can weigh up to half a pound. They have large, asymmetrical pincers with black tips. Females have a larger carapace, but males usually have larger claws. The larger of the two claws is called the crusher claw. The smaller claw is the pincer claw. If the crusher claw is on the right side of the crab's body, the crab is considered "right-handed.” On the left side, it’s "left-handed.” A fully-developed crusher claw is strong enough to crush shellfish such as oysters and clams. So, they'll leave a human finger badly bruised, if not broken, and once they've got a hold of your finger, it’s hard to convince them to let go.

The geographic range of the Gulf stone extends from the panhandle of Florida around the Gulf of Mexico and south past the southern tip of Texas. These crabs live in a variety of habitats from the bottom of bays, rock jetties, and oyster reefs to sandy/muddy bottoms and seagrass beds where they burrow in the mud for shelter, cold weather refuge, and molting. They range from shallow shorelines to offshore depths up to 200 feet, seeming to prefer slightly higher salinities than blue crabs, from full strength sea water at 35 parts per thousand (ppt) down to 10 ppt. During cold months, they move into deeper channels and passes. Females tend to outnumber males, particularly in deeper waters.

Stone crabs are opportunistic carnivores, but specialize in oysters, scallops, conch, clams, and a variety of crustaceans. They will also occasionally eat carrion. It has been estimated that they consume an average of 219 oysters per year, outpacing even the oyster drill, a species of small predatory sea snail. There are actually few predators the crab has to worry about. The size and power of their claws, as well as their hardened exoskeleton, are very dissuading factors. Plus, they’re also known to use their claws to gash and pinch a predator’s gastrointestinal lining. But some still take the risk, including grouper, sea turtles, cobia, octopi, and of course, humans (not that it’s much of a risk for us).

Mating takes place in the fall while the female is in the soft-shell stage, just after molting. A male will begin “guarding” a female before she molts and will continue to do so until her shell hardens. Males can often be found cradling the female during her vulnerable, soft state. It is only during this time that the male can deposit his sperm in the female’s seminal receptacles (sacs that store the sperm for future use). The female will use the sperm during the following spring and summer spawning season to fertilize her eggs. Females may spawn several times between March and September, with peak spawning occurring from May through July. A female deposits her fertilized eggs on the “hairs” under her belly apron in a large mass called a sponge. Sponges range in color from bright orange to rusty, red-brown and brown-grey based on developmental stage of the larvae. The number of eggs a female produces is relative to body size. Small females produce tens of thousands of eggs per sponge. Very large females can produce hundreds of thousands of eggs per sponge. A single female can produce four to six egg sponges per spawning season. Hatching occurs in 7-18 days, depending on water temperature. After hatching, the larvae go through several stages in a little over a month before they resemble adults. During most of this time, they are planktonic, or free-floating, and feed on zooplankton. Growth is fairly slow. Some females are mature enough to spawn by one year old, but many take a little longer. Males live about seven years; females about eight.

Stone crabs began to attract attention in the 1980s, when more of them began appearing in blue crab traps in coastal lakes and bays. Their large, meaty claws and lobster-like flavor quickly grew in popularity. While stone crabs are harvested in other states, the Florida stone crab fishery provides the majority of stone crab landings in the United States. Because their claws can be regenerated, most states require that only one claw be removed and the crab be returned to the water. This makes the stone crab fishery more sustainable in that the whole animal is not harvested. If claws are separated properly, the crabs are more likely to survive and regrow the claw over several molts. Juvenile crabs molt two or more times per year, and are able to regenerate a lost appendage in just a few months. Adult crabs, however, typically only molt once a year – females in the fall and males in the winter – so it takes a full year for an adult crab to regenerate a lost appendage and approximately three years for a regenerated claw to grow to 95% of its original size. Large crabs of both sexes most likely never fully regenerate claws due to their relatively old age. The regrowth is also greatly influenced by how responsibly fishermen remove the claws.

A stone crab can only regenerate a claw if the diaphragm at the body/claw joint is left intact. The diaphragm functions as a seal to close the wound and stop the bleeding. If the claw is separated incorrectly and muscle tissue is pulled from the body (indicating a forced break), the crab will bleed to death. A study to estimate stone crab mortality after de-clawing in Florida during the 2011-2012 fishing season noted that an average of 31% of the claws observed by FWC samplers in commercial fish houses statewide showed evidence of these forced breaks. Additionally, the researchers found that 12.8% of crabs died when no claws were removed, 23-59% died when one claw was removed properly, and 46-82% died when two claws were removed properly. The number of claws removed, how the claw was broken, and the water temperature at time of release were all significant factors contributing to potential mortality. Stone crabs have not been evaluated by the IUCN Red List, but the uncommon nature of this particular fishery certainly gives the species a leg (or claw) up on survival.

Where I learned about stone crabs, and you can too!