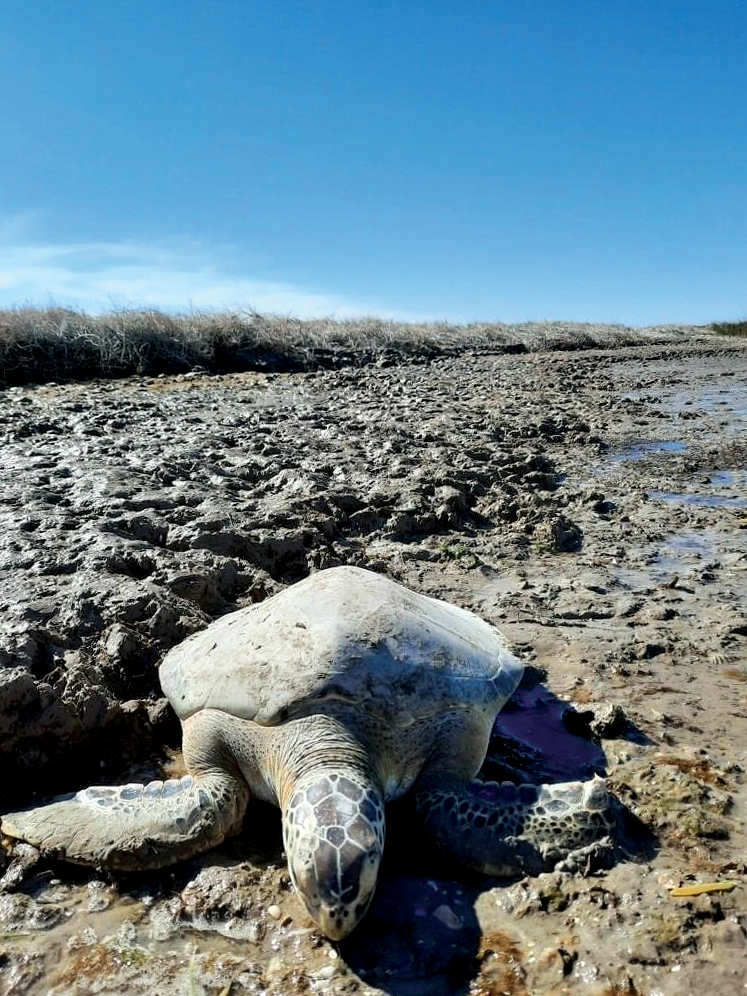 On February 14, 2021 the entire Lone Star state found itself under a Winter Storm Warning. Sleet and snow blanketed most of the state along with historic low temperatures especially in coastal counties. Winter Storm Uri had widespread implications for both Texans and Texas wildlife. With seawater temperatures in shallow bays hovering in the 30s and 40s, locating shelter was not easy for marine life, especially Green Sea Turtles. Texas Parks and Wildlife Department (TPWD) is one of the first of many agencies and organizations to administer aid in rescuing these turtles from the bitter cold.

Unlike mammals, turtles are cold-blooded and cannot regulate their body temperature. When water temperatures fall below 50 degrees Fahrenheit for more than 24-hours, it renders them cold stunned. Being cold stunned affects a sea turtles’ ability to swim and breathe. Hypothermia sets in causing them to be lethargic. They appear lifeless and float on the surface, where strong winds can push them towards jetties, passes or strand them along shorelines. With prolonged exposure to the elements, they often succumb to drownings, boat strikes, or find themselves increasingly vulnerable to predators.

TPWD utilizes cold front forecast data from universities and the National Oceanic and Atmospheric Administration (NOAA) to predict if and when water temperatures might fall below the temperature threshold for more than a 24-hour period. Once a potential freeze event is predicted, TPWD coordinators reach out to their local coastal field offices, game wardens, conservation organizations, volunteers, and rehabilitation facilities to coordinate a response action.

The severity of a cold stun event is influenced by the intensity and duration of a cold front.  Mild winters result in few, if any, sea turtles affected by the elements. While mass stranding events are relatively uncommon in the Gulf, the number of cold stunned sea turtles stranded in these events is on the rise. Over 13,000 sea turtles were cold stunned along the Texas Coast in the wake of Winter Storm Uri. This number shattered previous record-breaking cold stun events, like those in 2017-2018 with 3,675 turtles and in 2011 with 1,670 turtles.

The survival of a cold stun turtle is greatly correlated to a quick response time. Staff head out into freezing conditions as soon as weather permits. Scouting miles of remote shoreline is very time and labor intensive, as it involves weaving in and out of shallow bays and walking through thick mud. Stranded turtles are collected from shorelines or netted out of the bay and transported to designated sites along the coast for intake into rehabilitation facilities. Authorized holding shelters are often utilized when carrying capacity has been exceeded or proximity to a rehabilitation facility makes transport unfeasible. In the case of Uri, turtles where being processed at TPWD facilities and even newsworthy makeshift shelters, including the 45,000 sq ft South Padre Island Convention Center.

Staff and authorized volunteers triage the turtles documenting their location, species, carapace length, as well as tagging each turtle for future research. Turtles are placed indoors, allowing them to rest and acclimate their body temperature to a warmer environment. Veterinarians, approved by the Sea Turtle Stranding and Salvage Network (STSSN), assess the turtle’s health before being released. Once water temperatures increase and the turtle is fully recovered, they are released back into the Gulf of Mexico.

Volunteers play a crucial role in any cold stun event. Rescuing turtles is a daunting task and without the help of dedicated volunteers, most of these major events would result in larger causalities.  With over 350 miles of Texas coastline, it is imperative that this conservation effort draw in more trained volunteers, especially in remote locations.

Padre Island National Seashore Division of Sea Turtle Science and Recovery and the Gulf Center for Sea Turtle Research out of Galveston offer training courses for those wanting to aid in rescue and conservation efforts. Cold stun trainings are held annually via webinar. Trainings are free and open to the public. Participants are instructed how to properly handle turtles, identify species, document, tag, and sort, based on STSSN guidelines.

Cold stun rescues cannot be accomplished without the help of state and federal agencies, conservation organizations, local zoos and aquariums, and volunteers.