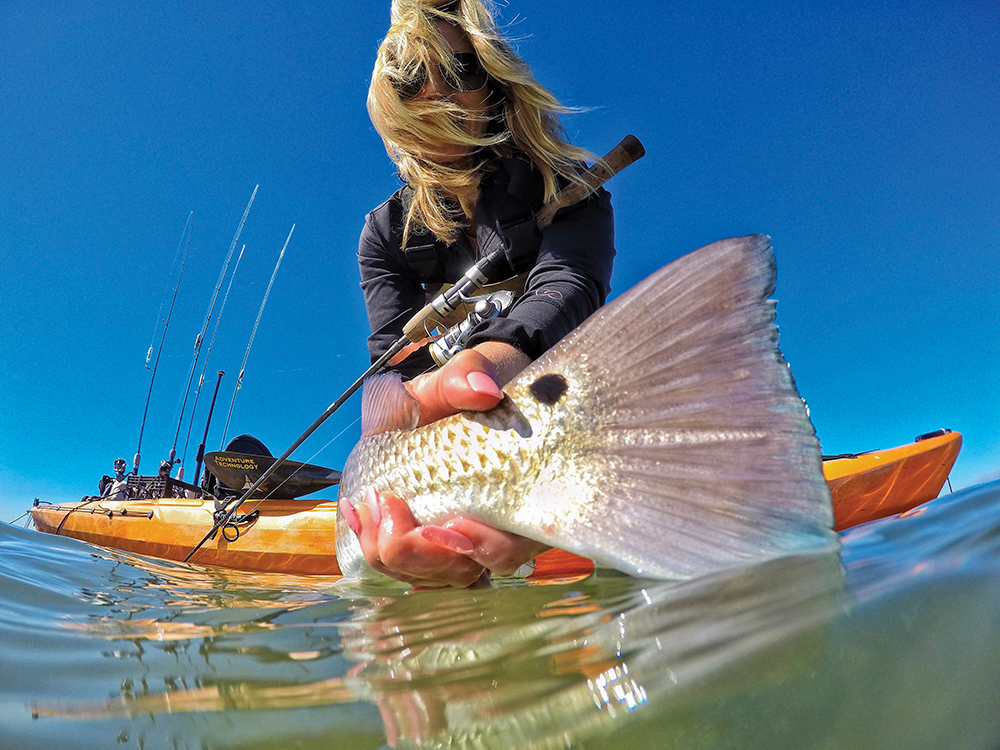 Spend any amount of time out on the water along our coast and it becomes quickly evident that saltwater fishing is a male-dominated sport. Not breaking any news here. But why is that? I know plenty of women who love to fish. Hell, I’m married to one. We’ve all heard the guys who are doing chores around the house to “earn” some time out on the water, the infamous “kitchen pass.”

Why not try getting your significant other involved in the sport you love? I know many happy couples who share time on the water. Those guys also seem to have an easier time acquiring new rods, reels, lures, and even boats. I honestly can’t recall a time in our 34 years together that Camille has asked, “Do you really need that new (insert rod, reel, boat, etc.)?”  Hell, she has more expensive rods and reels than I do.

I was lucky, Camille’s dad had fired up the fishing bug in her long before I came along. And once we started dating it came natural for me to take her along because I had grown up with a mother who was always on the boat with us. When my girls got big enough we put them on the boat, too.

I know some of you guys don’t want to hear this, but there isn’t anything particularly difficult that we do while fishing that women aren’t perfectly capable of doing as well. You may have to be patient and teach them some things if they didn’t grow up around the sport. In my guiding experiences it is usually easier to teach women things about fishing than it is us guys. Most of them are willing to listen to instruction. Most of us aren’t.

Besides getting the added time on the water and less resistance on new gear, you can also benefit from having that extra help. When I’m going out on my own or with customers it’s all on me to launch, dock and load the boat. When Camille comes along she backs us down the ramp with me already in the boat, parks the truck and then does the same when we return. She wasn’t born with the ability to back a trailer, but wanted to learn so she could help out.

Same goes for when we’re out fishing. I’m not babysitting, I have a fishing partner who can handle her own business whether that be dropping the anchor, tying on a new lure or landing her own fish. Whether we’re jumping out to wade, taking the kayaks, or fishing from the Dargel, she is totally self-sufficient. The only thing she doesn’t do is pole the skiff around and that’s probably just because I haven’t asked her to. I get to be on the water a lot more than she does these days and I really enjoy watching her on the bow nailing shots at redfish, so I’ll pole daylight to dark if she wants.

I know there’s a bunch of you out there thinking, “Well that’s great for you, but my wife hates fishing.” Well maybe you should’ve checked their resume’ a little closer. Nah, I’m kidding. Do a little thinking on it and try to come up with why they don’t like it. Did their dad take them out on miserable trips when they were a kid? Did they grow up in a non-fishing household and have never really tried it? Did you take them out and force them to fish the way you do as a seasoned angler instead of as a beginner? Maybe you made them stick it out on a super slow day even though the weather was terrible.

Figure out the obstacle and work the problem. If they hate the heat, go early and get off the water before it gets too hot. If they hate cold, don’t make them fish all bundled up. If they get bored easily, use bait and get some bites instead of sticking with only lures. Also don’t force them to keep fishing. If they want to take a break to read or nap or whatever, go with it. If she tends to get hangry be sure to bring lunch and snacks. I can fish in whatever conditions non-stop for hours without eating and only getting a drink because I know I have to. Camille wants nice conditions, food and the occasional break.

If you’ve read my columns over the years and some of this sounds familiar, it is. It’s a lot of the same advice I give when guys ask how to get their kids started fishing with them. Taking any beginner out expecting them to chunk lures all day for trout is a surefire way to lose them. Do what you need to do to catch some fish, any fish. If that means dead shrimp on the bottom catching whatever bites, so be it. The catching is more important at this point than the method.  If it is enjoyable early on then maybe they’ll want to progress into fishing your way. I doubt very many of you out there stepped up with a baitcaster chunking a Corky on a cold, winter wade the first time you went fishing.

Another route would be to hire a guide. You want the right kind of guide though, one known for patience and willing to work with beginners. Most of us can tailor a trip to fit the situation if you let us know ahead of time. For instance, I had a fella book a beachfront tarpon trip and then brought along his girlfriend who had never been on a boat and had never been fishing. She was pretty miserable and the dreaded seasickness started coming on. I wasn’t geared for jetty or bay fishing so the trip turned into a fishless boat ride and I seriously doubt she’ll be excited to go fishing in the future.

If her hesitation is in getting on a boat with a man she doesn’t know, try getting with one of the female guides. Some ladies are just more comfortable learning from another woman. I can think of three off the top of my head who would be great for introducing her to the salt. Shellie Gray has been at the game for a good while and fishes in the Seadrift area. Kim Goulden out of Port O’Connor is as salty as they come and I see her out with couples all the time. While I’ve never shared a boat with either of them their reputations are solid and I wouldn’t hesitate to recommend them. One young lady I have fished with several times is Ruby Delgado down in Port Isabel. She knows her stuff and is a lot of fun to spend the day with.

So there it is boys, the map to a better fishing future for you and for your marriage.