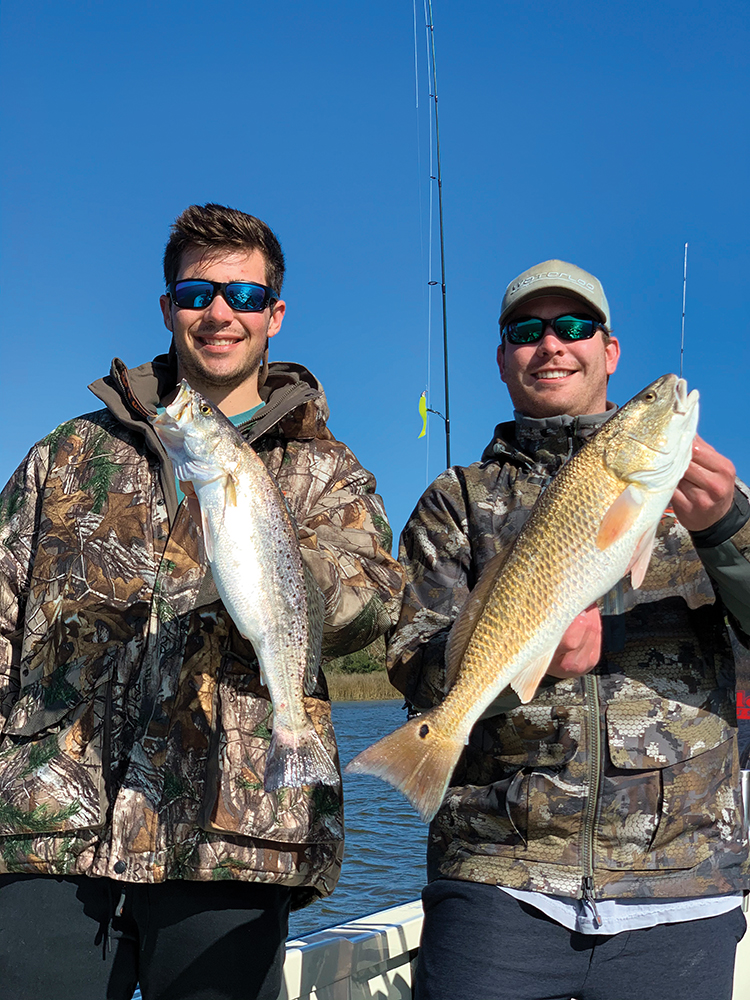 I could tell that Michael White and Thomas Watson were raised with an appreciation for the outdoors. These young men could flat out fish!

My dad, Pawpaw, and I headed out of Dickinson Bayou in the dark in Pawpaw’s old Renken. It was a cloudy and humid July morning with a subtle southeast wind at around 5 knots. I couldn’t have been more than 10 years old at the time. I remember always having trouble going to sleep the night before our trips. There was something about fishing that excited me like nothing else in my young life. As we rounded Marker 27 at the mouth of Dickinson Bayou and headed southeast toward the Bolivar Wells I remember the unique smell of the salty early morning air. It always smelled fishy to me, especially that time of morning. Everything about our surroundings seemed so full of life while on the bay.

When the conditions were right we would often stop at Channel Marker 31 near the Texas City Dike before heading to the wells. There was an old sunken shrimp boat there surrounded by a mud flat and scattered oyster reef created by old ship channel spoil. The tide and wind were perfect on this particular morning. Rafts of mullet were getting showered out of the water as we drifted a long stretch parallel to the channel. I remember dad pointing out the trout slicks that were popping up along the edge of the rafts and the distinct smell that still resonates with me to this day. I was throwing a red and white Kelly Wiggler shrimptail on a 3/8 ounce lead head. Some of our Ambassador 5000s were strung with Dacron while others were filled with 15 pound monofilament.  The one I liked was the one with mono. I can’t remember the rod I was using but I think it was one that our late friend Gary Heckendorn had made.

If I remember correctly, my dad and pawpaw let me make the first cast. No sooner than my shrimptail hit the water a four-plus pound trout breached the calm surface as the sun still hadn’t quite found its way to the horizon. After a brief fight she pulled loose and you’d of thought my dog died. Not much has changed 40 years later. I still hate to lose fish, especially ones that are above average size. Of course, back then four-pounders were a dime a dozen but it might as well had been an eight-pounder in my young eyes.  That old shrimp boat is long gone and that stretch of the ship channel doesn’t have much to offer these days but the memories are still there. I think of all of those early morning stops every time I pass that marker.

I can remember another time when we went offshore on my Pawpaw’s friend’s shrimp boat, the Lady Sherry. This was my first exposure to waters past the Galveston Jetties.  I couldn’t believe how blue the water was. I remember being mesmerized by all of the shrimp and different species of marine life we caught in the shrimp net. We used ribbonfish and cigar minnows to catch bonito, jackfish and kingfish. I know that those species are not all that glamorous in the eyes of discerning offshore anglers these days but it was most certainly a thrill for a kid like me back then. I didn’t know it at the time but it would be the only offshore trip I would ever share with Pawpaw. Those were memories that are etched into my mind forever.

When my daughter was four years old I took her fishing for her first time. I bought a quart or two of live shrimp and Power Poled down at the mouth of a little bayou where me and my clients had been catching good numbers of trout. I don’t know if I’ve ever seen a cork go under faster than I did that day. Brooke caught countless redfish, specks, flounder and sheepshead until we ran out of shrimp. Not bad for her first fishing trip! I was thrilled that she got to experience all that action on her first trip and I was even more thrilled to be able to spend quality time together on the water.

As the years went by she would fish soft plastics with me around wells and reefs, and catching trout and chase reds with me in the back lakes. Brooke just turned nineteen and she is not only an avid angler but she also loves to hunt deer and ducks. She still finds time to do both between maintaining good grades in college. We live in different times than when I was her age but my wife and I have tried to raise her in ways similar to our own upbringing. Work hard, respect others, and enjoy and appreciate these great outdoors that God has blessed us with.

Through the years I’ve taken folks fishing from all walks of life. I’ve taken a father and son on their last fishing trip together before the father lost his battle with cancer. I’ve had the opportunity to take underprivileged kids and kiddos with special needs out to experience a majestic world they seldom get to see. There were kids who fished with me years ago who are now grown. Many of them have graduated college and have thriving careers not to mention beautiful young families. Many of them still fish with me today and I owe a special debt of gratitude to their parents for leading them down the right path.

More than half my clients who fish with me today had never thrown lures until setting foot on my boat. Many started out with a spinning reel but are now throwing a baitcaster. There were times when I might as well have been speaking a foreign language when I mentioned slicks, nervous water, color streaks, etc., to them. Not now.  The ones who have stuck around and wanted to learn have learned a lot and I take great pride in that. Hell, I have some of them teaching me new tricks these days and I love it!

Through the years there have been many firsts and personal bests caught on my boat.  All the smiles and high-fives from clients having the times of their lives is more gratifying than I can put into words. In addition, most of my customers and I have become great friends after years of fishing together. All of this being said, there is another reason I enjoy my profession.

Selfishly, sometimes it’s for my own challenge and my own enjoyment. The challenge is sometimes just simply trying to make stubborn fish eat a lure. Other times it’s a trophy trout that I lost on a wade the day before and I want to go back every day to seek retribution. More often than not it’s the simple peace and enjoyment of sharing my boat with other like-minded folks who love God’s great outdoors and the conversations of families, careers and life’s lessons.

I’m certain I could bring home a better paycheck by doing something else for a living and there are many ups and downs that come with this profession, but there’s a lot to be said for happiness. And after all, it never was about the money.

You Never Know What Lies Beneath