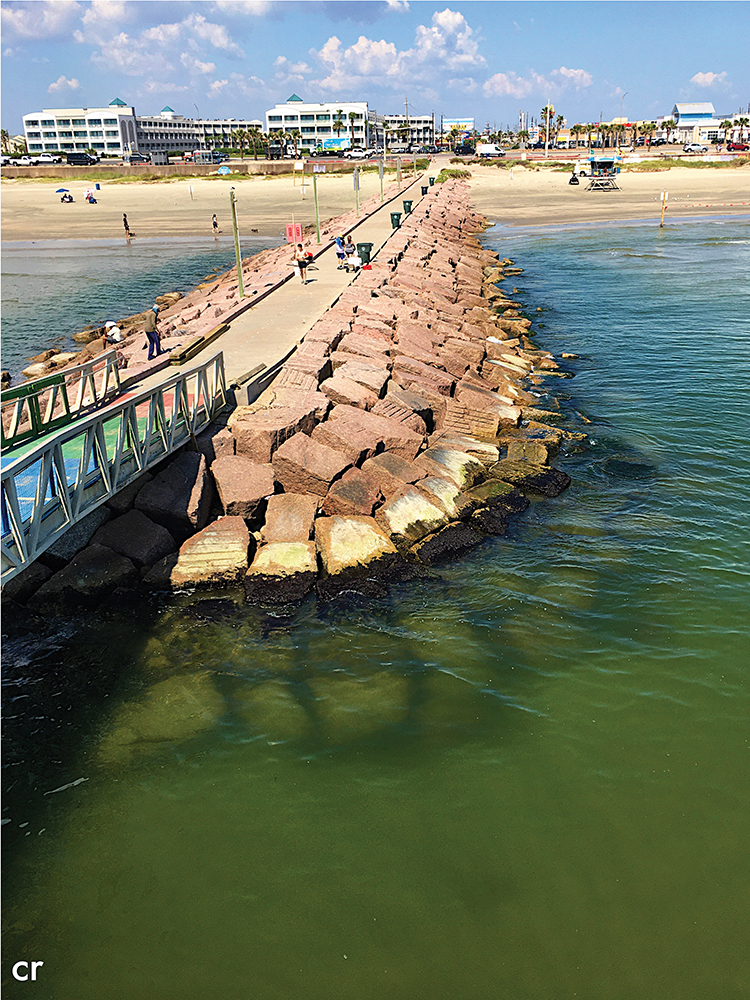 Someone recently inquired what sort of tackle they should carry when fishing Texas jetties, of which there are eight at last count. They didn’t specify shark fishing, so I assume that, like most anglers, this guy was looking for the usual trout, redfish and mackerel. When walking the rocks you see all manner of tackle out there, but here are a few pointers with Christmas just around the corner.

Baitcasting Reels. We began “plugging” the jetties a long time ago, using baitcasting reels and whatever single rod each of us owned at the time. Why? Around those rocks, they landed more fish than spin tackle. Usually six feet long, our rods back then were not ideal, but could also be used at Rayburn and Toledo Bend reservoirs when bass fishing. Not the pistol grip handled rods that were popular then, ours had regular handles. In the years since we’ve bumped up to seven-foot rods, ideal for slinging plugs and spoons all day, versus anything shorter or longer. Back then we had our red reels, the famous Ambassadeur 5000B (and later the 5500), always loaded with 20-pound line. Today there are all sorts of baitcasting reel models—lighter, more streamlined, less likely to backlash, more expensive. It should be noted that we were walking the rocks and had to power redfish up from the depths, or stop a trout from wallowing close and making a last-second run. We’d time a wave where each fish was washed onto a handy flat rock. (We never used landing nets). That’s sketchy work for spin tackle with customary 12-pound line.                        `

With the exception of South Texas, we didn’t actually hike out from shore. We ran boats, often aluminum boats but also bass boats and my trusty Old Yellow, a 15-foot walk-through windshield Thunderbird. We’d ease in close, toss the anchor on a dry rock, climb onto a rock that didn’t look too treacherous, and shove the boat out into deeper water. Then hike up and down the wall, tossing spoons. If the wind ran straight down the jetties, we’d anchor 30 feet out and jump overboard in front of amused nearby boaters. That technique is…rather rare these days; many of us earned a scratchin’ from barnacles. Or worse, a trip to the ER. Today’s jetty boaters either anchor and sit, or use electric motors to cruise up and down the line of rocks while casting. Out in open water, those guys can use spin tackle, which has weaker pulling power; but they’re pulling fish away from the rocks, while we were atop the rocks and pulling fish towards us. Medium-heavy action rods and strong baitcaster reels did the job, though.

Spin Tackle. In more recent years I get more kick out of tugging on fish with spin tackle; that lighter line requires some finesse with each fish. You can also cast a long ways upwind without a single backlash. To me, spinning gear isn’t as accurate as with baitcasters, but the jetties don’t require perfect casting. As for cost, I favor inexpensive spin reels after seeing several lost overboard. Why use a $250 reel, when a $36 model will do the same job for years? Out there on the rocks, your luck can run out fast: a small shark or ladyfish will yank a rod from the boat when least expected. A disastrous fall on the rocks is hard on gear, too.

These days I prefer the Shimano Sienna 4000 reels; if one is dunked in saltwater, I’ve had other guides tell me to toss it and buy another. Once flooded, they’re never quite as smooth as before, but I’ve stretched them for another year or two after a thorough cleaning. The purist may favor finer tackle, but jetty fishing is gritty work, with hazards all around.   Far from sedate casting on some quiet flat in the bay, it’s quite the opposite. Some guides won’t even fish the jetties; they’re uneasy around currents and waves crashing into cruel granite every few seconds. We became completely used to it, though perhaps squandering our youth in the process, fishing so many years out there, perfectly content in a high energy, marine environment. A wet butt and a hungry gut, that was us. But we caught more than enough quality fish to satisfy.

Favorite Lures. As for tackle, we lost a great many of our favorite spoons out there, because mackerel always seemed to be around the Sabine jetties during warmer months. If we’d only had 40-pound fluorocarbon leader back then, which is super tough. A couple of feet connected straight to the reel’s line, (without a swivel) would have saved us a lot of lures and landed more fish. Adding a split ring to the front of the spoon would have increased wiggle action and avoided more cutoffs, too. Trout can be finicky around 40-pound leader, but fluoro really works and is said to be invisible underwater. Only three days ago (as I write this), Amy and I ran into a mixed school of trout, ladyfish and Spanish mackerel. Action was fast and furious, it was every cast. We started with regular 30-pound mono for leaders, but these were cut to pieces and six spoons and jigs were quickly lost. I dug out a spool of fluoro and tied on several feet. Mackerel chewed and chewed on those new leaders, but just couldn’t bite through it. We soon had an Igloo full of mackerel and a few 20-inch trout. It was the kind of day where a half-dozen fish followed your lure, with not another boat in sight. And glassy calm.

As the surf rocks photo shows on a nice autumn day at Galveston, jetties are much like icebergs, with most of their structure underwater. Those simple rock groins stretching out from the Galveston seawall are miniatures of real jetties, built to counter wakes of passing ships. Hook a fish while standing on those rocks, and you’re pulling them across an underwater obstacle course, which can spell disaster if a fish is strong enough to head for the cover of the rocks. Thus our medium-heavy casting rods and tough line. As far as I know, Ande still makes the toughest and most abrasion-resistant monofilament. As for braid, I still haven’t tried it out there. And hardly anywhere else, for that matter.

Green Water. We quickly learned to watch for green water out there, often during an incoming tide. Clear water isn’t difficult to find from Port O’Connor on south but on the upper coast, many a hopeful angler has been greeted with “chocolate milk.” Spoon success requires somewhat clear water and if that isn’t available, then slow-fishing plastics works better. Better yet is live bait.

If you’re more into using live bait, a cart or wagon will carry your bucket, live shrimp and aerator. If the jetty is smoothly built for pedestrian traffic, the hardcore angler might lug a 6-foot radius castnet in a bucket, and lob it over passing mullet. At those Galveston seawall groin structures, the rocks only extend a short distance underwater and a 10-foot throw (in murkier water) will yield fine shrimp during summer, also menhaden; both are prime baits. Boats with livewells have it much easier, of course. Plunk down cash at the marina for live shrimp, anchor at the jetties, and use corks. Or “free-shrimp” with just a small split-shot weight to take that shrimp down a few feet. Where it can explore the rocky, fish-filled depths and very likely, will have a short lease on life.

This list was earned after many years of walking the rocks and learning from mistakes. I’m not the only one who loves the combination of a sloshing green tide in the rocks and sharp smells of the sea out there; in the past I’ve noted three former Houston Chronicle outdoor writers who did pretty much the same thing, mostly fishing the Quintana jetties at Freeport but also Sabine Pass.