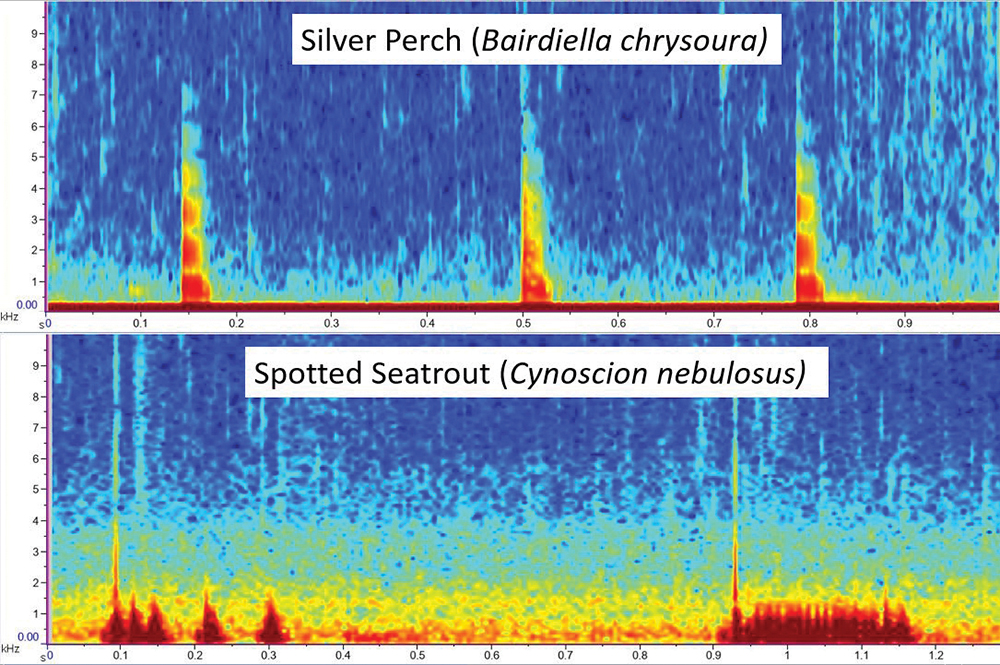 The drag on the reel began to tick, slowly at first and then steadily increasing as the rod tip bent downward towards the stained waters of Copano Bay. It was mid-January, and the Black Drum run was well on its way for most Texas estuaries bringing big Black Drum to both boat- and shore-bound anglers alike. The fight was quick but intense, and I hauled the three-foot silvery, black fish up onto my kayak to snap a quick picture before allowing it to resume its run to the Gulf.

Even before I brought it aboard, I could hear the drumming; but now the sound intensified as it vibrated through the hull of my small boat and into the waters around. Deep, guttural, other-worldly. That a fish could make such a sound never ceases to amaze. Any angler that’s landed one of these behemoths can attest to their talkative nature, and vocalization among fishes is not unusual.

All the common species of drum (fishes of the Sciaenidae family) in our Texas estuaries vocalize to some extent—some more than others. These include the oft sought-after Red Drum, Spotted Seatrout, and Black Drum but also the slightly lesser-known species such as Silver Perch and Whiting (called Southern and Gulf kingfish by some). Besides the drums, Gulf Toadfish and Hardhead Catfish vocalize as well. Such vocalizations are largely associated with spawning but are also used to signal distress (for example, when caught by an angler or a large predatory fish) and to display aggression. By listening in to the underwater chatter of our estuaries, scientists can learn a lot about the presence and behaviors of these noisy species.

As a way of eavesdropping on fish drumming conversations an underwater microphone, called a hydrophone is used along with a submersible recorder to capture and store the sounds emanating from the marine environment. These devices are left in the estuary to record sound clips at a predetermined sampling schedule. The collective composition of sounds at a given time is referred to as a “soundscape.” Soundscapes are often unique to a given area and season and are shaped by the fauna, habitat, weather, and human activity that characterize them.

In Texas estuaries, for example, oyster reef soundscapes often contain the snapping and cracking sounds of shrimp and the “boatwhistles” of Gulf Toadfish, while the evening soundscape by a wooden platform might contain the “purring” of spawning seatrout and the deep “drumming” of Black Drum. Once collected, sound files are analyzed to quantify the sounds produced by soniferous (i.e., sound-producing) fish and explore general trends in ambient noise (for example, how loud an area is over time). Many soniferous fish produce species-specific calls that can be identified by their frequency range, duration, and cadency – allowing scientists to identify the presence of these fish based on their sounds alone.

Recently, scientists from the University of Texas Marine Science Institute (UTMSI) in Port Aransas have been collaborating with Texas Parks and Wildlife Department (TPWD) field staff in the Mission-Aransas estuary by placing hydrophones alongside TPWD gill net samples to assess the utility of this technique in monitoring local fish communities and the health of the estuarine ecosystems. TPWD has conducted fisheries monitoring in Texas estuaries and nearshore waters for over 40 years. This monitoring program uses several different sampling gears (including gill nets, bag seines, and trawls) to assess the relative abundance of fish and invertebrates across time. This collaboration between TPWD and UTMSI is helping to determine if fish sound production (i.e., what we hear with the hydrophones) reflects the abundance and diversity of fish sampled in the gill nets.

While this collaboration is still ongoing, we’re beginning to understand the potential benefits that this supplementary monitoring could provide. One of the major benefits is the extended time-period that hydrophones can listen-in to the estuarine soundscape. While this is limited by recorder memory and battery life, it’s not uncommon to deploy hydrophones for weeks or even months at a time—continuously recording the chatter of the bay. Additionally, while gill net surveys often result in some amount of fish mortality, acoustic surveys are completely harmless to any fauna that they encounter. However, we are finding that while we can identify multiple species of fish from the hydrophone recordings, it may be difficult to quantify abundance. Some studies have found relationships between the abundance of vocalizing fish and soundscape-derived metrics. This suggests that scientists may be able to use acoustic monitoring to gauge relative abundance, but not absolute abundance. In other words, acoustic surveys may provide information on which sites contain more sound-producing fish but not exactly how many. Also, the fact remains that some species of fish don’t vocalize (at least to our current knowledge), which means that the hydrophone’s data tends to stay “silent” as to their presence. Regardless, the information that can be gleaned could still be useful for informing many other biologically important truths such as the timing of spawning and recruitment for vocalizing fishes. With continued collaboration planned for the coming seasons, we hope to further sort out the specifics of exactly what can and can’t be learned by simply listening to the sounds of the estuary. Perhaps by listening to the “beat of a different drum,” we’ll gain insight that was previously unheard of in fisheries management.

Listen to actual fish vocalizations from this study!