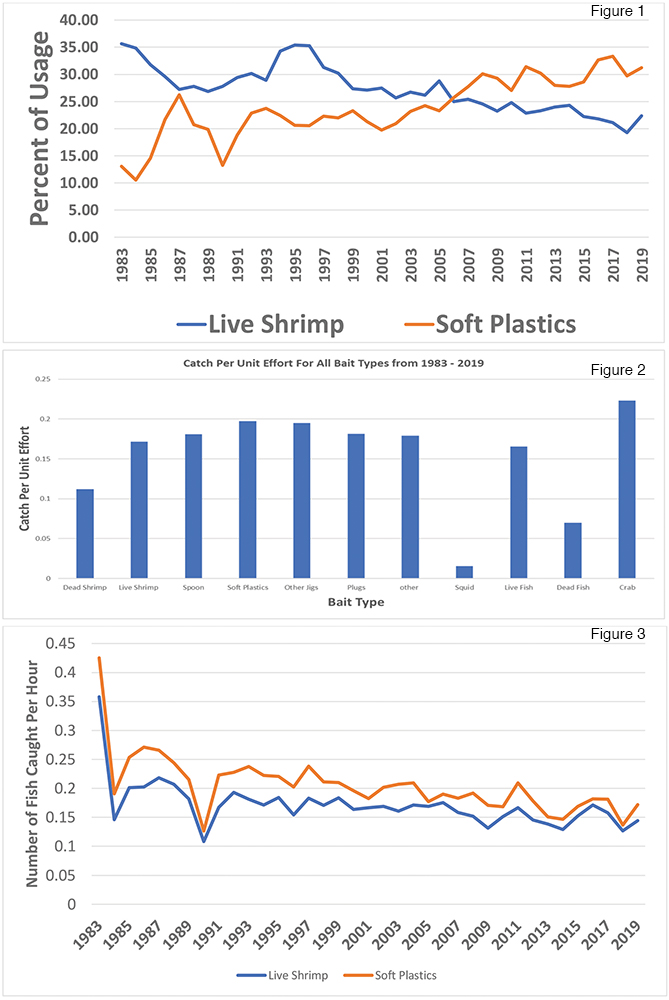 Figure 1: Percentage of anglers using soft plastics and live shrimp from 1983 through 2019 from the entire Texas coast.

Figure 2: Shows the Catch Per Unit Effort for each bait type from years 1983 to 2019 from the entire Texas coast.

Figure 3: Shows the Catch Per Unit Effort of soft plastics and live shrimp side by side from years 1983 to 2019 from the entire Texas Coast.

For many coastal anglers in Texas, their fishing trip begins with a quick stop to the local bait shop to pick up a bucket of live shrimp. Live shrimp have always been a popular bait among anglers and for good reason; it is easy to use and successful at catching fish. However, over the last few decades, soft plastic baits have improved dramatically, and today there are more styles and colors to choose from than you can possibly imagine, making them more popular among anglers. The question is: how popular have soft plastic baits become and are more people choosing soft plastic over live shrimp for bait?

To answer this question, we looked at data collected from the Texas Parks and Wildlife Department (TPWD) Creel Survey Program which has been active since the 1970s. These creel surveys take place at public boat ramps along the entire Texas coast. Biologists and Fish and Wildlife Technicians perform these surveys in-person as fishermen return to the boat ramp. These surveys collect important information about fishing trips such as how many anglers per boat were fishing, how long they fished, location, bait type, targeted species, which species were caught, and the length of each fish harvested. This information helps the Coastal Fisheries Division manage our coastal resources and can even help answer questions like “Are more anglers switching from live shrimp to soft plastics?”

Looking at the data collected from the TPWD Creel Survey Program since 1983 from all Texas bay systems, the answer is yes. The percentage of anglers fishing with soft plastic baits has steadily increased since the early 1980’s while the use of live shrimp appears to be slowly declining (Figure 1). The data also show that a noticeable shift occurred in 2006 when the percentage of anglers using soft plastics versus live shrimp went from being roughly equal to soft plastics to steadily surpassing live shrimp in the following years. This interesting data shows a clear shift in bait choice, but why might this be?

To understand some of the reasons for this shift in bait preference, a small survey was conducted at Adolph Thomae Jr. County Park located in Rio Hondo, Texas. Anglers that were fishing with only soft plastics or live shrimp were interviewed and asked whether that bait type was their preference and if so, why they chose that bait type. Most of the anglers that were interviewed were using soft plastic baits and said they always fish with soft plastics. There were a few common responses when asked why they choose soft plastics. The most common responses were, “I catch more fish with soft plastics than with live shrimp,” and “I feel it’s more of a challenge using soft plastics.” Many anglers also stated they catch more targeted species such as Spotted Seatrout and Red Drum using soft plastics versus live shrimp, which catch a lot of less desirable species such as Hardhead Catfish and Pinfish.

Since some anglers reported that they catch more fish using soft plastic baits than with live shrimp, we looked at creel survey data to determine if indeed this was true. This was determined by calculating the catch per unit effort (CPUE) from fishing trips where anglers used soft plastics and live shrimp. CPUE was calculated by taking the total number of anglers per boat and multiplying that number by the total number of hours fished, this gives the total angler hours per boat. Then dividing the total number of fish caught per boat by the total angler hours per boat gives the CPUE for each interview. This calculation was done for every survey conducted before the data is separated by bait type and the total CPUE is calculated for each bait type. According to the data, the total average CPUE of soft plastics was 0.20, meaning that an average of five angler hours are required to catch one fish using soft plastics. The CPUE for live bait shrimp was 0.17, meaning 0.17 fish were harvested using live shrimp per hour (Figure 2). Though the two bait types present similar CPUE’s, there is a significant statistical difference in CPUE between the two bait types.

When comparing the CPUE of soft plastics to live shrimp another trend can be seen. In years when the CPUE for soft plastic baits dropped, so did the CPUE for live shrimp. The same pattern occurred when the CPUE of one bait type increased, the other increased too (Figure 3). So, what does this mean exactly? In fisheries management, the CPUE is generally used as a measurement to determine overall species abundance and changes in CPUE can indicate a rise or drop in the abundance of a species. The two bait types have similar patterns in CPUE in 1983 to 1984 and 1989 to 1990.These years had big freeze events that killed large numbers of fish and resulted in lower CPUEs for those years. This means that when the fishing is poor using one bait type, it will generally be poor with others as well. This is not to say that these baits aren’t working well, but that the overall fishing conditions are poor and species abundance is lower.

Overall, TPWD data show the following: (1) more anglers are switching from live shrimp to soft plastic baits, (2) Anglers state they are catching more targeted species using soft plastic baits and the data does indeed show a significant difference in catch rates between the two baits, and (3) when one bait type is having a good year catching fish, so is the other. No matter what your preference is in bait, pick up some soft plastics or stop at your local bait shop to purchase some live shrimp and go fishing, because they are both successful at catching fish! Remember only purchase native shrimp species such as Brown Shrimp, Pink Shrimp, and White Shrimp for bait. Never use imported or exotic shrimp species for bait as it could potentially spread diseases to our native species of shrimp.