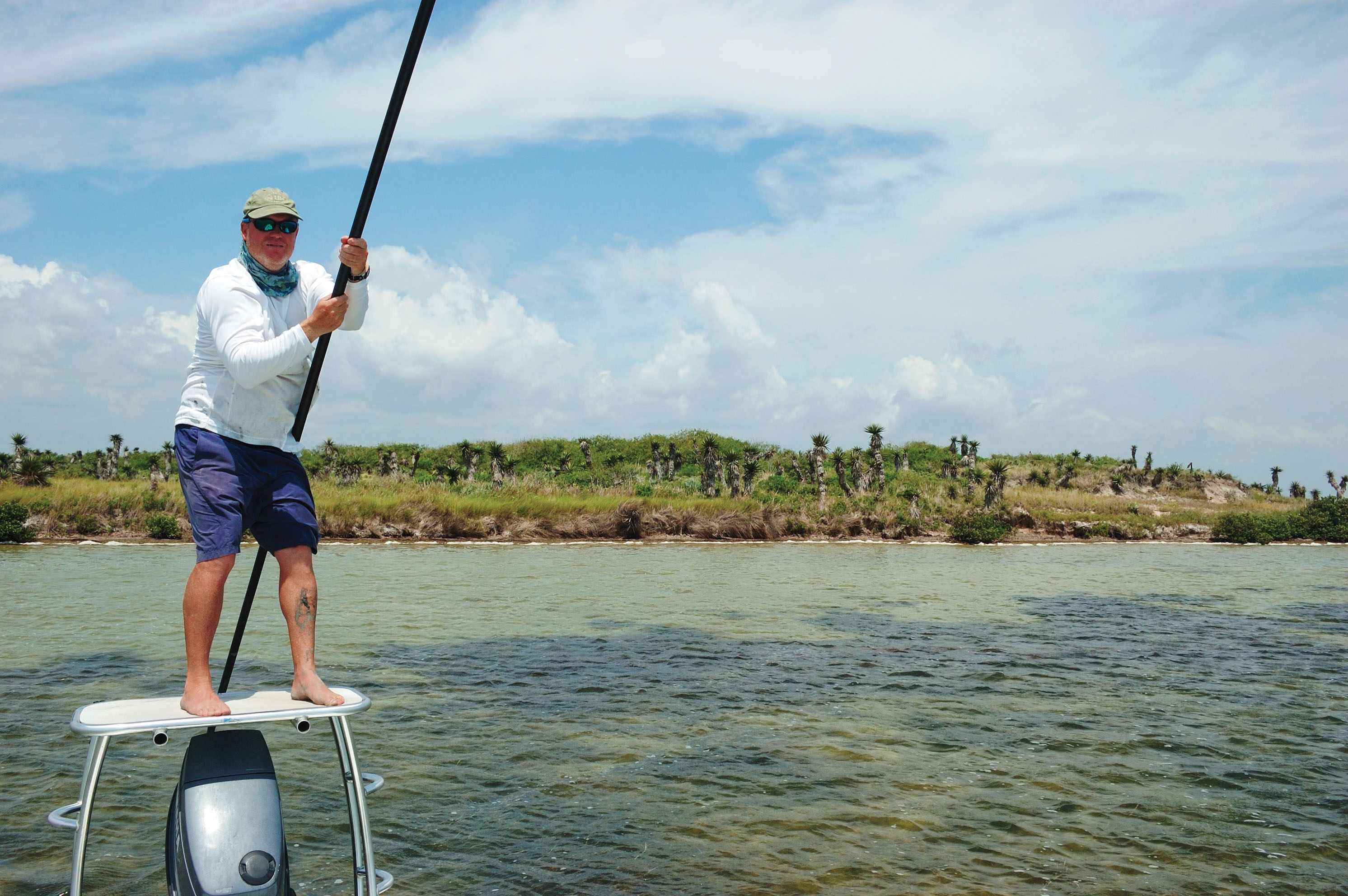 On a sultry June morning I stepped aboard Captain John Spencer's Hells Bay skiff and we pulled away from a sun-bleached dock on the Arroyo Colorado in deep South Texas. Spencer owns and operates Posada Del Colorado Lodge. Located 30 minutes northeast of Harlingen, Arroyo City is a small community of waterfront fishing cabins built along the south bank of the Arroyo Colorado. The town is flanked on the north by several large iconic ranches and on the south by the Laguna Atascosa National Wildlife Refuge, insulating it from sprawling development.

A unique aspect of fishing out of the Arroyo is the option to fish a handful of different types of water and target a variety of fish species. Anglers can go after tarpon and snook in the brackish waters of the river, make the run up to the Port Mansfield Jetties for pelagic quarry, hit the sandy troughs to the south for big trout, or the shallow flats for redfish. All of these options are within reach and make the Arroyo an exciting place to be. If you fish, you'll like Arroyo City. If you fly fish, you'll love it.

Spencer's lodge, Posada Del Colorado, caters to small groups of light tackle and fly fishing enthusiasts. The lodge is comfortable and clean, the food is terrific, and the atmosphere is relaxed and genuinely refreshing.

After our short run out the Arroyo, Spencer turned his boat south and throttled into the steady coastal breeze. From the wide green vein of water marking the path of the Intracoastal Waterway, I stared out across the vast, shallow, windblown landscape of the Lower Laguna Madre. The western shoreline was peppered with Spanish daggers, mesquite, and prickly pear - straight out of a spaghetti western. And to the east, a mind-boggling expanse of thin water stretched toward the horizon like a flooded desert, where it eventually met the backside of Padre Island.

We pulled up to the windswept side of a narrow spit of islands and John hopped up on the poling platform. "We have been seeing some huge trout here in the sand pockets Casey, but they are spooky and very hard to catch," John said as we drifted down the shoreline. Sure enough, up ahead I spotted what looked like a large piece of driftwood wobbling in the shallow chop. It was a speckled trout - a big one. Before I could make a cast, the trout busted me and slid off the flat like a fat eel. It was quite a site. We ended up catching a few reds and seeing a half dozen large trout on that stretch of water, the most I have ever seen in a single outing.

Around noon, John fired up the motor and we headed east, toward what is often called "the sand." The sand is an expansive area of hard sand flats that stretches along the western shoreline of Padre Island. The water on the sand flats stays crystal clear and when conditions are right, redfish, trout, ladyfish, and a host of other species travel great distances across the sand in search of food. Their colors adjust to match the habitat and they can be surprisingly challenging to spot- like a bonefish. It is an awesome place to drift or wade and fishing there is truly a unique experience.

From the hard sand flats John and I headed north and ended up drifting near a series of small islands that are rookeries for the local birds. One island in particular was literally covered with gulls, skimmer birds and their hatchlings. John paused the boat at a safe distance for a few minutes so we could watch the birds squawk and squabble for territory and protect their fuzzy-headed offspring. It truly looked like something out of a nature documentary and it would not have surprised me to see David Attenborough come walking over the shell banks with some insightful narrative.

I saw some beautiful country over two days of fishing with Captain John. We caught some fish, missed a few, and saw plenty more. But no matter where we went one thing repeatedly came to mind- the importance of a good guide. A good guide with the right boat, proper navigational skills, and a sound knowledge is so important. No doubt, these are fundamental aspects of angling and watercraft operation on any stretch of water, but in the remote shallows of a place like the Lower Laguna Madre, they are especially important.

I am generally the first to preach the benefits of self-teaching and learning the hard way, even when it means enduring a string of failures and hard lessons. BUT… when it comes to navigating across expanses of unfamiliar water with limited cell phone service and few land marks, it's a different story. In these types of places knowledgeable guides with sound equipment and plenty of experience are worth every penny. They will do their best to get you to fish and then get you home safely.

There are a number of reputable fly fishing/light tackle guides who fish the Arroyo/Port Isabel area. They include Captain Eric Glass, Captain Ernest Cisneros, and Captain Rick Hartman. These guys are seasoned professionals who have spent years learning the remote waters of the Lower Laguna Madre. Their knowledge is hard-earned and hiring them for a day is a smart step toward great memories and a safe, enjoyable experience.

Many thanks to Captain Spencer for his hard work and a great trip on the Arroyo!