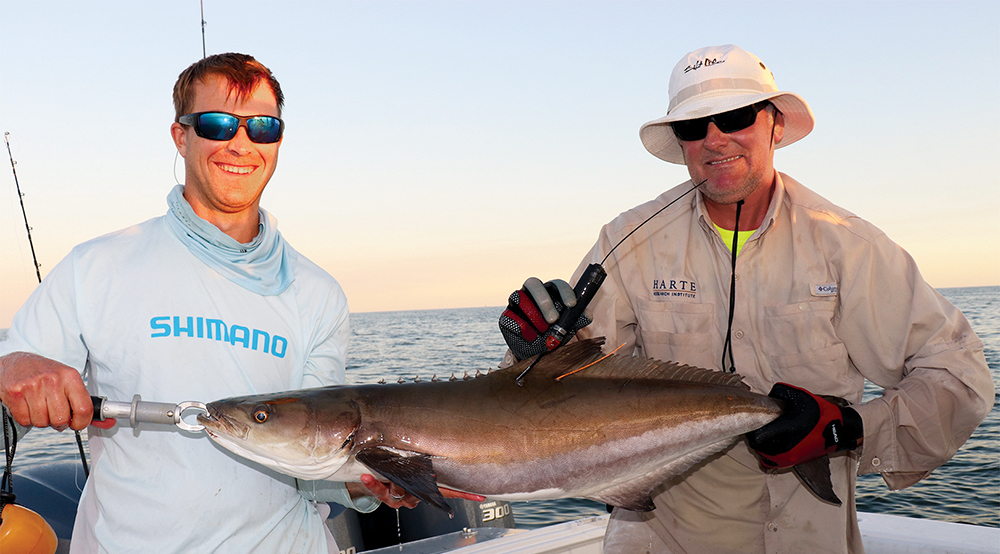 Figure 1: Sportfish Center researchers Dr. Matt Streich (left) and Jeff Kaiser, M.S., (right) with a PSAT-tagged ling. Jeff is holding the PSAT tag while the orange dart tag with our contact information is also clearly visible. Chances are that someone reading this article will catch one of these tagged ling so please keep reading for instructions on what to do and how to claim your reward!

Few things create more commotion on deck than a ling surfacing next to the boat. The only thing broader than this species’ range are the names anglers refer to them by. Whether you call them lemonfish, crab eaters, or cobia, ling are always a welcome addition to the fish box.

Due perhaps in part to their popularity as table fare, many conservation-minded anglers have been reporting declining ling landings and a few have even advocated self-imposed bag reductions. Based on this angler-driven information, the Texas Parks & Wildlife Department and federal agencies have begun funding additional assessments of Texas’ ling populations. Areas of particular interest are post-release survival in the hook and line fishery, habitat use patterns along the Texas coast, and seasonal movements to evaluate ling stock mixing (if any) between U.S. and Mexican waters. Mixing has significant implications for management, especially if the degree of stock overlap between the U.S. Gulf and Mexican waters is high.

Sound like a tall order? Well, it is, but not too tall for Dr. Matt Streich. One of the best parts of my job is getting to work with world-class researchers, and Matt is no exception. He has been studying Texas’ sportfish populations for the better part of a decade and has developed expertise in unraveling the mysteries of sportfish movements. He also happens to be an avid angler, routinely chasing tarpon, trout, and wahoo, making him the perfect person to lead this project (Figure 1).

So where to start when trying to track fish in open water? Outer space, obviously. Matt attaches pop-up satellite archival tags (PSATs) to ling using a custom tether and dart anchor. These satellite tags will stay attached to the fish for a predetermined amount of time before automatically detaching and “popping up” to the surface where they upload stored water temperature, light level, and depth data to orbiting satellites. They can even provide tracks of the fish while the tag was still attached.

Some ling are also surgically implanted with a small acoustic transmitter that emits a unique sound signature. Listening stations, called acoustic receivers, are positioned in strategic locations to listen for these fish, although the effective transmission range of the acoustic tags is often less than a couple hundred yards. Acoustic technology helps us understand small scale movements, while the satellite technology is geared towards recording regional- to global-scale movements.

Cooperating anglers have also been provided with dart tags to increase the number of tagged ling as part of our citizen scientist sportfish tagging initiative. This has led to numerous recapture events which have provided us with additional data. Captain Kyle Gonterman and his son Gavin recently reported one of these recaptured ling. Interestingly, this fish was recaptured one year later at the same artificial reef where it was tagged, almost to the day. It also grew about 4 inches and packed on several pounds during that time. Kyle was able to provide us with new growth and movement data from this recapture, no small contribution when starting a new dataset.

As Dr. Streich and the rest of the Sportfish Center team have moved forward with our ling research, we have come to rely on anglers like Kyle and Gavin for support. If you happen to catch a dart tagged ling, please call 361-825-2525 with the fish’s tag ID number, length, and weight. If you happen to catch a ling with a full PSAT tag please record the tag ID number, release it, and call the same number. Anglers reporting recapture events will get a small reward for their contribution.

The Sportfish Center and our Citizen Scientist partners have already tagged nearly a hundred ling. As this number continues to rise, we look forward to understanding this fishery on a deeper level and getting to meet the wonderful anglers who hook into these awesome fish.

For a first-hand look at how we target, catch, and tag ling, activate the accompanying video.

Quentin Hall is the Angler Outreach Coordinator for the Center for Sportfish Science and Conservation at the Harte Research Institute. He turned his lifelong fishing and hunting habits into a career, receiving dual bachelor’s degrees in Animal Science and Fisheries Management from the University of Missouri and his M.S. in Marine Biology from Texas A&M – Corpus Christi. While Quentin’s research focuses on a variety of studies ranging from juvenile sportfish recruitment dynamics to sportfish movements, his true passion is connecting anglers with the science supporting their fisheries.

Catch a Tagged Ling and get Rewarded