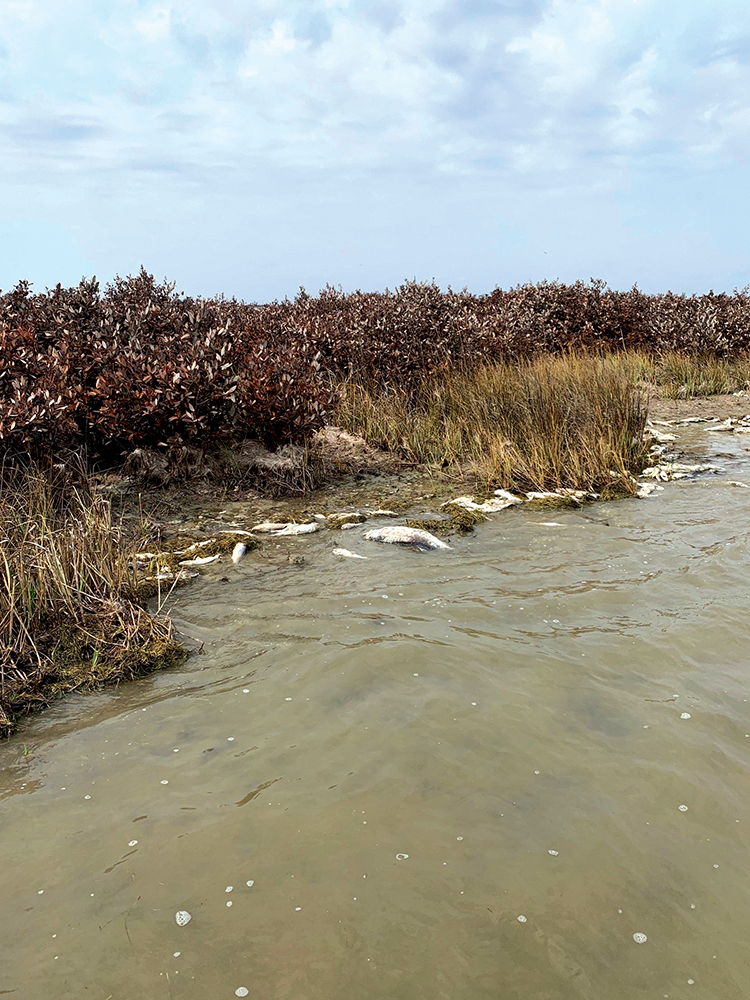 The damage to fisheries wrought by February 2021 freeze was evident along many miles of Texas bay shorelines and waterways.

The February 2021 winter storm rocked our state and had dramatic impacts on coastal resources. As we all witnessed in real time, this extreme cold event had devastating effects, killing nearly 4 million finfish according to original minimum estimates. These events are a rare but natural cause of fish kills. As water temperatures begin to decline, fishes seek refuge in deeper and warmer waters. Unfortunately, not all fish make it to warmer waters or reside in a bay system that offers multiple locations for refuge. In these situations, fish have increased chances of being exposed to critical temperatures and are certainly more vulnerable to human impact in the few locations that offer thermal refuge. Such is the case in the Lower Laguna Madre (LLM).

Since the winter storm there has been a great deal of conversation regarding barge traffic in the intracoastal and compliance with the voluntary traffic suspension in the Lower Laguna Madre. The official name of the program that provides guidance on traffic suspension is the Lower Laguna Madre Cold Water Spell Warning System and the origins of these efforts date all the way back to the 1980s with analysis by Dr. David McKee, Dr. Hildebrand, and others following the freeze events in 1983 and 1989. A mid-2000 grant that included funding from Texas Parks and Wildlife and the Coastal Conservation Association provided means to measure temperature gradients in the Laguna Madre and set-up a temperature prediction system. This included traffic suspension procedures being developed as part of a collaboration between the Coastal Conservation Association (CCA), Texas Parks and Wildlife (TPW), the Gulf Intracoastal Canal Association (GICA) and the Texas A&M University-Corpus Christi Conrad Blucher Institute (CBI).

Here is brief step-by-step process of the current procedures:

For this particular event, CBI officials began monitoring predicted air temperatures on February 5th, 9 days prior to the onset of critical temperatures. Beginning February 9th, daily predictions and analysis were conducted to generate the recommended advisory – which was issued on Saturday, February 13th at 10:30AM – requesting voluntary traffic suspension for 12PM on Sunday, February 14th through 10AM on Wednesday, February 17th.

According to GICA officials, there was 100% compliance by GICA members during the latest voluntary suspension. There was one tow/barge that resumed ICW operations on the afternoon of Wednesday, February 17th, two on Thursday, and nine on Friday/Saturday. It is important to note that not all barge operators are members of the GICA. While the number of non-members is small, it is evident that some were not aware of the voluntary suspension notice or, most likely, irresponsibly chose not to comply with the recommendation and proceeded to navigate through the LLM and Land Cut during the advisory.

Since the start of the program, with a short interruption around 2015-2016, the CBI has provided the modeling and predictions. While current forecasts are still “manual”, more sophisticated and automated technologies recently became available and CBI officials are working for a large Artificial Intelligence grant (AI2ES.org) that can support and improve the modeling efforts. They are also welcoming additional funding to expand the program further north. They estimate that they can continue this work for the next four years, while long-term funding and outside institutional support (such as NOAA) will be required to carry the program into the future.

One interesting side note to the barge traffic compliance are the results from a 2007 study, which you can find at https://www.cbi.tamucc.edu/wp-content/uploads/Laguna-Madre-Temp-Monitoring-Performance-Report.pdf. As noted in this report, during cold events the LLM is a homogenous water column with no significant water temperature differences observed at depths from 3-feet to 12-feet deep. This highlights the value of deeper portions of the ICW, ship channels and ports. If any thermocline is going to exist in the LLM, it will be in these locations. As such, reduced water column disruption by human activity is even more important. More information on the study and report can be found at https://cbi.tamucc.edu/cbi/Predictions/water-temperature-forecasts/.

Side notes and lessons learned from this past event: