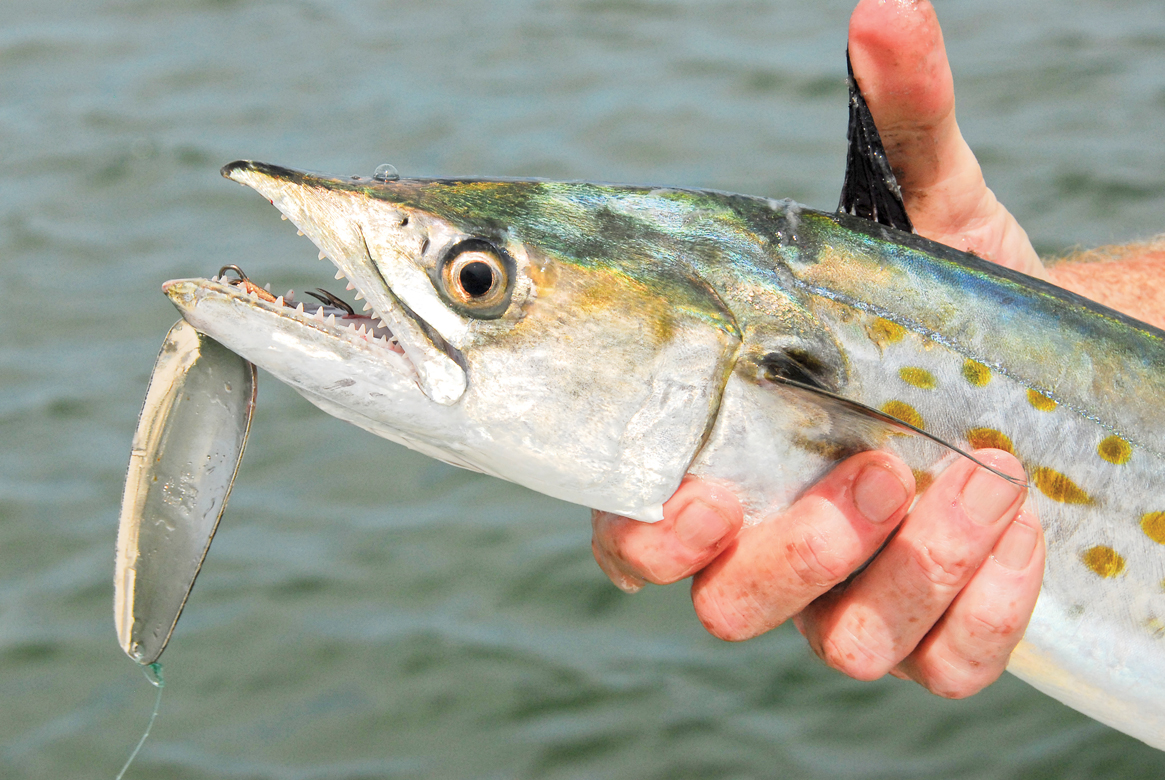 Green tides and Spanish mackerel go together. You've got to like that. On the beachfront, so-called "mackerel water" is rich with startling color and clarity. You get pumped just looking at it.

Schools of racy mackerel shoot through the beautiful currents during late summer and early fall, and inshore anglers can intercept them from surf piers and jetties. The long granite-block jetties especially are good; some are easier to access than others but all can reach light-tackle mackerel action.

Some salty anglers have an attitude about Spanish mackerel and I never have understood this haughty disdain. It probably stems from the speckled trout pros using live shrimp when "free shrimping" with a pinch of lead, or when drifting a kicking brownie under a cork.

You cast out, get a sharp strike and – Zowwee! – nothing. The needle-sharp teeth of a mackerel easily can cut a light monofilament line, costing time and tackle.

And mackerel can be murder on soft plastics – one short strike that misses the jig hook and you reel in a ruined lure. When mackerel are in the surf, the attrition rate on a pouch of prized plastics can be brutal.

And, admittedly, Spanish mackerel run on the small side – the average fish along the Texas coast is in the one- to two-pound class and anything over an honest four or five is exceptional. Of course, that's not so different than the average speckled trout.

The state record is 8.70 pounds but, to repeat, you'll grow old between five pounders. Unless maybe you live in North Carolina; the IGFA world record is 13 pounds, caught off Ocracoke Inlet in 1987. Florida is close behind with a 12 pounder.

Regardless of size, the Spanish mackerel is a sleek and handsome fish, with a wicked forked tail, dramatic colors, and the sharp pointed head of a no-nonsense killer. They hit hard and run fast and you can catch them on or near the surface as opposed to growing old while soaking bait on bottom.

And they are easy to clean and good to eat – superior by most palates to the larger king mackerel. As a bonus, you get a high yield of meat per fish. Cut off the small head, clean the puny body cavity, slice the trim fillets, and you are ready for a hot broiler. As with most oily fish, they are best when fresh, not frozen.

I think mackerel are great; under "ice cream" conditions, I go out of my way to fish for them. And my favorite way to do this is by walking the jetty rocks and using a light rod. And, for what it's worth, the beachfront schools during the cooling water of September and October seem to hold larger fish. At least, this has been my experience.

The best way to catch mackerel is to rig for mackerel. When walking the rocks, the idea is to travel light and unencumbered so you can bounce from granite perch to granite perch, chunking and moving until a school is located.

A small spoon (say, 1/2-ounce, maybe two or two-and-half inches in length) is an excellent choice. It casts well, with superior ballistics, and no fish is going to cut it in half. A short (four- to six-inch) light wire leader secured with a loop knot to the spoon prevents unnecessary cut-offs. Dark wire is less visible and the braided easy-to-knot products are simple to use. A pocket spool of 20- to 30-pound test flexible wire will last forever.

A small swivel helps prevent line twist; again, the swivel should be dark (a shiny one invites strikes that can slice the connection). If you forget the swivel, it's not a deal killer as long as the spoon can freely twist and wobble against a split ring or loop knot.

A recent drive-to trip to the Surfside Jetty near Freeport was a good example of a mackerel assault mission. The Gulf was "green to the beach," groomed by a light southeast wind and an incoming tide. I walked about half-way out and began rock-hopping.

I made long casts straight away from the rocks and fished fast and shallow. This is the percentage technique for Spanish mackerel. Allowing the spoon to settle several counts might expand the strike window but regardless of depth mackerel prefer running the open currents rather than prowling close to the rocks.

This approach and tempo are in contrast to the slower retrieves angled along the sloping blocks for specks and reds. It's also much less apt to hang up – unless you throw a bad backlash. For this reason, an open-faced spinning reel is a fine choice, especially in the hands of a tangle-prone beginner.

Come to think of it, the spinning reel probably has a faster retrieve ratio than the typical casting reel. I always have favored casting tackle for coastal fishing but this is one instance when prejudice can be put aside for practicality. The spinning rig can effectively cover water and you cannot crank fast enough to pull a spoon away from a hot school of mackerel.

But this particular trip I was armed with a 7-foot casting rod and a level-wind reel spooled with 12-pound mono. What can I say – I still like the feel and blur of a positive free-spool cast.

About 15 minutes into the rock-hopping, a hard strike jolted the rod. A quick splash on a green swell marked the hooked fish. The mackerel ran laterally, with the line stretched across the surface. It had more horsepower than a trout and it was a decent keeper, about two pounds. The spoon looked secure in the hinge of the jaw.

I had no net; frankly, my celebrated "catlike reflexes" aren't what they used to be, and climbing down the random blocks close enough to use a net can be sketchy. So I lowered the rod tip and reeled close and waited for a surge to help flip the fish onto a flat granite surface. This can be hit-or-miss, and you hate to see a fish pull free and flop into a crevasse for the nasty jetty rats (rivaled in size only by Norwegian wharf rats and the odd possum).

But the severe snout of the mackerel is durable and the derrick technique usually works. Conversely, the speck is more apt to shake and thrash, and the fragile tissue framing the maw is more apt to tear. This is not the combination you want as an inbound prize arcs through the air.

As with many fast-lane predators, mackerel must keep moving to stay alive. Rats or no rats, they seldom last long on a cord stringer sloshing around in the surge. Or, worse, left to bake on a flat rock. So, without ready access to an ice chest, you don't want to overstay the clock on a summer day.

Two hours later I quit with seven Spanish mackerel – well short of the 15-fish daily limit, but a fun session and sufficient for several baggies of fillets. The generous limit is another good thing about mackerel. The minimum length is 14 inches and it doesn't take much of a mackerel to make muster.

No doubt, the boater has greater potential during a good run. Drifting or trolling with small spoons or jigs off the beachfront can be very productive, especially when birds are working over surface schools. But it's not all about numbers and a mackerel assault mission on the rocks is my style of fishing.

I shook the stringer into an ice chest, put the rod and stringer belt in the back of the Tahoe, and drove home a winner.