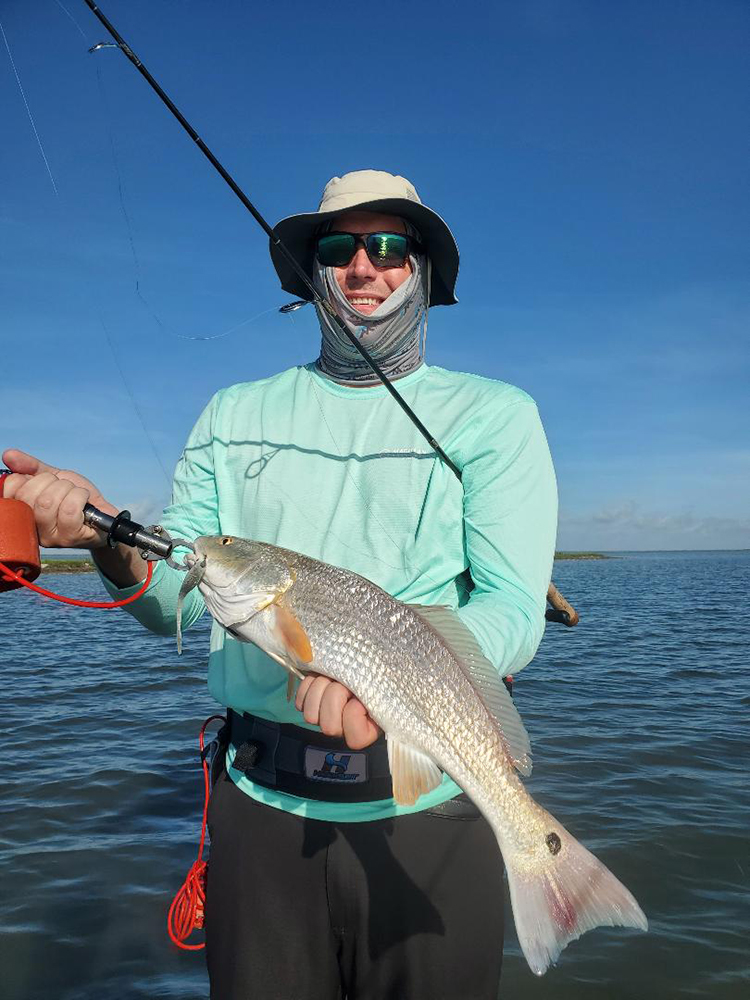 Brad Jackson’s red caught from a school we found in a large pothole.

Greetings from Port Mansfield! I will jump right in and point out that water temperatures got hot in a hurry this summer. What we normally see in August arrived in June. I’ve seen it as high as 91° and the average has been around 88°. There are patches of cooler water near the East Cut but the flats and backwater areas get toasty by midday. Makes me wonder what the water temps will be in August.

In my last column I reported redfish action being relatively strong with trout still slow. Fishing has slowed in general since then and some days can flat out be a struggle. Since the rise in water temperature both the reds and trout have ventured off to deeper water. It is challenging for the wade fisherman, but it can still be done.

When winds are relatively calm you can set up on submerged spoil humps and toss soft plastics toward deeper water. The key is fishing them near bottom while slowly bouncing the lure back up the spoil. This method has produced for us, but as noted, it is up to the wind whether you can make it work.

On breezier days we set up near the ICW and work close to the ledge. This scenario works best with south-southeast wind. You want to cast parallel to the channel and southerly winds help in that regard.

Our next play, if it is blowing 15-plus, is setting up along spoils early and working between them and the ICW. This is typically good until mid-morning or a bit later, depending on the amount of boat traffic.

Floating grass is another issue we have to work around and it can be a deal breaker at times. Floating grass can be wind or tidal driven. If you watch the currents, you can usually find a stretch of water that is fishable. It may not be the exact area you want to fish, but it is what it is. Later in the day we are also working deep grassbeds and ledges to get bites when fish on shallow flats become scarce. If you have caught on that we have to fish near deep water with current, you are correct. The primary exception would be at first light.

Snook are a different animal; they love hot water. The tricky part is finding them. Based on the February freeze it’s sure to be a challenge. But I am up for a challenge, so I will be poking around the flats and potholes I have found them in years past and see what I come up with. I sure hope that some made it through because they are such a spectacular fish. I would also like to get a few more tags in them for the Harte Research Institute – Texas A&M Corpus Christi.

Speaking of the Harte Institute. Dr. Greg Stunz and team will be in Port Mansfield on Sunday, September 19 assisting with a ReleaSense seminar and training. The Port Mansfield Chamber of Commerce will be hosting and everyone is invited. Dr. Stunz will provide scientific data regarding post-release survival and other topics. This is your opportunity to get the facts and ask questions of those who know.

Moving into late summer we should see redfish beginning to school. If the water remains hot this might actually start in deeper water, and then move shallower as the water cools. There is nothing quite like walking into a school of hungry reds in knee-deep water with everyone hooking up and having a good time.

Just yesterday I ran across a school of redfish in a big pothole. When this happens, make a wide circle and set up about 75 yards upwind. Let it settle down for a few minutes and then slowly wade back toward the pothole. Most of the time the reds will resume feeding and you can ease in and catch a few. We did this and were successful. Check out the accompanying QR-code video. Brad Jackson had never wade fished or even caught a redfish. However, on this day he had the rare pleasure of watching the school approach and with a little coaching he nailed it. On his third cast, no less.

Right now, our topwater bite has not been all that great but the KWigglers 4-inch Paddle Tail and Willow Tail Shad have been producing the best bites in the shallow. The Ball Tail Shad has been on point in deeper water.

Stay safe and remember now is the time to help our bay. Please release more than you keep.