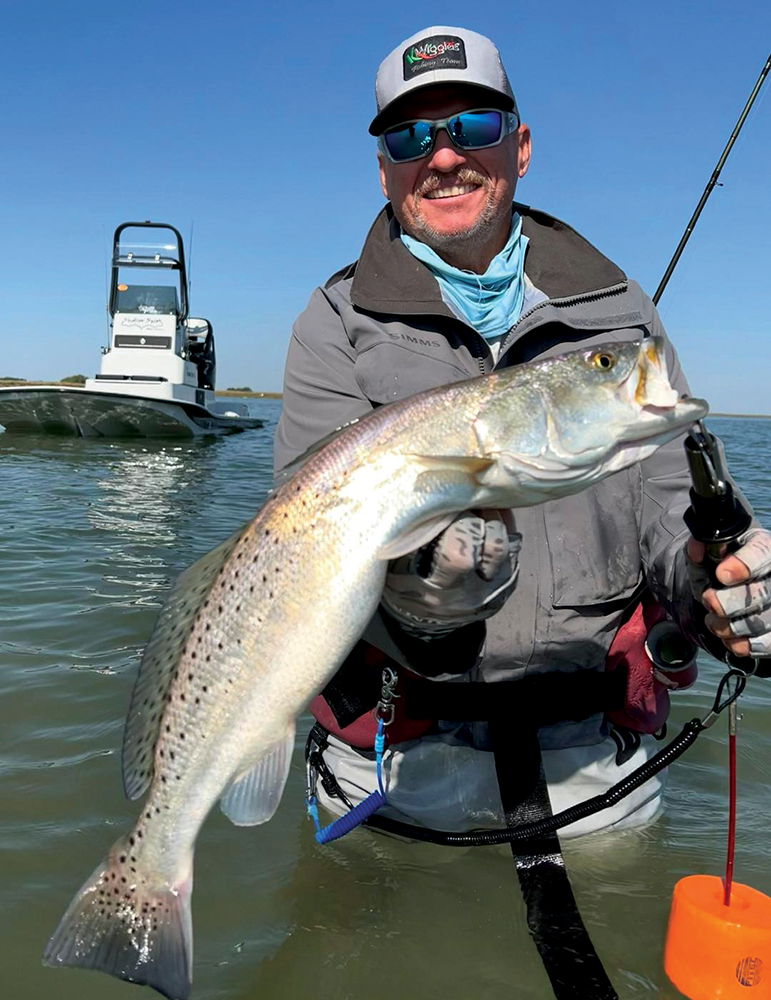 Solid trout for Mike Frazier during a warming trend between cold fronts – CPR!

As February draws near I reflect back to the days just prior to last year’s devastating freeze. We all know the outcome; the part I didn’t see coming was how it opened my eyes in ways I could have never imagined. If I would have known just five years ago what I know today I am confident I would be a ten times a better angler and guide.

This past year has been like drinking from a fire hose with the flood of information I received relative to our fishery and the people I have met, whose names I’d never even heard prior. Folks over at the Harte Research Institute have been highly instrumental in educating me regarding our fishery.

Little things like the growth rate of speckled trout – one inch per month until about fourteen inches. The survival rate for catch and release trout – about 90% overall. And, the two types of flounder in our bay system, the Southern Flounder and Gulf Flounder – Southern Flounder being by far the most common and having three distinct dots on their back. The list goes on but my point is becoming educated in the field in which you work and love pays huge dividends toward your development.

There’s so much more to it than getting a captain’s license, discounting rates to get trips, and filling stringers every chance…although some still start out that way. Have we grown; become more patient, perhaps become more balanced in our approach to fishing and guiding? Perhaps it could be described best as the evolution of the angler/guide? It’s all individualized, nonetheless I have made an incredible journey over the last seventeen years and hopefully some of you have as well.

Our Port Mansfield fishery remains somewhat stable but if you’ve fished here very long you already know our trout population is far from what it used to be. Not doom and gloom by any means, just the truth. We have excellent days when we catch and release multiple fish in the 3 to 5-pound range, maybe even a 6-pounder. There are even a few 8-pounders out there, but it definitely requires being in the right place at the right time. And then praying throughout the fight she doesn’t get loose.

February is our coldest month so I tend to be flexible when deciding what time to leave the dock. There are very few reasons sufficiently pressing for me to leave before sunrise on really cold mornings. I pay close attention to the water temperatures and try to predict when the first uptick might occur. This does not happen at 7:00am – more like 9 or 10. This, coupled with solunar feeding periods, day of the week we are fishing, and a few other variables help me plan my outings. Some of this planning actually begins days ahead.

I remember last year when another guide had been targeting the same area I had been working. My group and I slow-rolled to the location and stabbed the Power Pole a significant distance away and began a leisurely conversation. About 30 minutes into it one of my guys asked when we were going to start fishing. “In a bit,” I replied, “but I want to eat my taco first.”

You see, the other guide and his group were already in my spot and from their distance from the boat I could tell they’d been there a long time, probably since sunrise. A few minutes passed and the guide began making his way back to the boat to gather his anglers. As his boat disappeared in the distance I raised the Power Pole and began idling to the spot he’d just vacated. Long story short, we never fired up the Mercury again until we headed back to the dock. The rest of the day and well into the afternoon we enjoyed as fine a day of catching as one could hope to experience. Timing is everything!

Trout will be at their heaviest between February and April and I’ll be doing my best to stay up with the trends and patterns, which lately have been fairly predictable. So far this winter it has been about downsizing my jighead weights and working baits slowly, (see attached video.) I’m using the KWigglers 1/16 and 3/32 2/0 black-nickel jigs with the new Wig-A-Lo in Smoke N Mirrors, Lagunaflauge, and The Truth colors. This combination can be worked super slow while it’s natural buoyancy lends to keeping it out of the grass…and it casts a mile.

Remember to put the resource first!